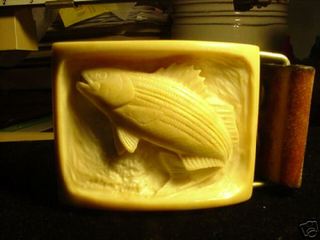 Monday, February 25, 2008: Above: Isn't this amazing? It came up on eBay. I was so tempted to bid on it despite an opening price of $299. It sucks being po’. It sold. Had it not, I would have contacted the seller to arrange a buy. Hey, the one who dies with the most credit card debt, wins. Here’s the information about this piece of fine art. “Hand carved by a world renowned carver Allen Luiz. He carved this for my dad in Newport RI many years ago. It is 100% hand carved on pre-ban elephant ivory. This carver is world class. I don't know if this is considered scrimshaw, marine art. When we go to Nantucket we see stuff like this but not nearly as good for 3x the starting price. The belt wore out but can easily be replaced. The D ring is nickel silver. Hard to find quality like this. By the way it is a STRIPED BASS. What a gift for the fisherman friend. Buckle measures 59mm x 45mm (25 mm/inch). There is some fine checking, very shallow, and gives it quite an old look. Even though this magnificent piece is not signed by the artist Allen Luiz, it is GUARANTEED to be carved by his hand. My father has many, many of his commissioned carvings …” Below is an important release from the RFA. It is written by BY BILL STERLING of the RFA: WACHAPREAGUE -- Saying anglers are facing a "critical and defining point," Jim Donofrio of the Recreational Fishing Alliance spoke to a capacity crowd at the Island House Restaurant on Tuesday concerning legislation that would address new limits for flounder fishing. A bill introduced by U.S. Rep. Frank Pallone Jr., a New Jersey Democrat, last week would allow for limited flexibility in setting fishing limits where stocks have increased substantially. That bill and House Bill H.R. 4087 introduced by U.S. Rep. Walter B. Jones of North Carolina would amend the Magnuson-Steven's Fisheries Management Act, which produced a fisheries management plan enacted decades ago to set a course for the Atlantic States Marine Fisheries Commission to manage certain fisheries, including the flounder fishery. Many anglers believe the act has set targets that are overly restrictive and based on flawed data. The National Marine Fisheries Service sets summer flounder quotas for the region and each state based on scientific data from the Mid-Atlantic Fishery Management Council. "No one in this room wants to catch the last fish," said Donofrio, who spends much of his time on Capitol Hill working with legislators. "Fishermen and hunters are the original conservationists. We want to protect the resource. We may be overfishing by law, but not biologically. We need to put some common sense in the law and have it based on accurate data. What we have now is a law with no flexibility." The meeting preceded a gathering next week by a state commission to set flounder size and catch limits that some fear will hurt recreational-fishing-related businesses. Several questions from the audience focused on methods used to collect data to determine the total of the previous year's catch. The two methods typically used include telephone surveys and dockside surveys. Several questioned the validity of the results from those methods, saying telephone surveys ask for the number of fishing trips and what is being sought but not what is caught, and that recorders are seldom seen at the docks, even where flounder fishing activity is high. Donofrio said the random telephone calls usually produced three kinds of responses, "Those who tell the truth, those who lie and those who won't tell the government anything." Also proposed during the town-hall style meeting was adding local members to the Save the Summer Flounder Fishery Fund, a new, non-profit organization made up of charter boat captains, bait and tackle shop owners, tackle distributors, wholesalers and others whose livelihoods are dependent on a healthy and vibrant recreational fishing industry. Suzy Parker, wife of a charter boat captain in Wachapreague, said flounder limits were not just an issue for the charter boat industry, or an issue of commercial versus recreational fishermen, but "a fisheries issue that needs political support." Donofrio agreed, saying it comes down to "access and freedom to fish. We are right on this," added Donofrio, "and we need to work together to get our political leaders to listen." Jeff Deem, a member of the Mid Atlantic Fisheries Management Council who attended Tuesday's meeting, wrote in the Eastern Shore News recently, "Some will argue that the growth of the stock has faltered because we are 'overfishing,' which is different from 'overfished' and is defined as catching more than the recommended poundage for each year. Please keep in mind that the number which defines 'overfishing' is set lower and lower each year in an attempt to reach the possibly unattainable 2012 target. The reality is that the stock is so healthy that we are catching more than what was predicted even though we are following the size limits and daily catch limits which were designed by the experts to reduce the catch. Although these regulations were estimated to have a 50 percent to 75 percent chance of holding the catch to the intended limits, they have rarely succeeded." Deem added, "The NMFS refuses to deviate from its perceived mission. It is up to us to convince Congress to modify the MSFCMA to allow for building this fishery while maintaining the infrastructure that supports those who participate in it. It is critical that you contact your congressional representatives now so that they can act during this session. This fishery could be virtually closed as early as next year." The proposed legislation would not take effect, if passed, until July.