"What the hell? .. What a weird dream." Monday, August 17, 2015: Hard south winds have taken control and the ocean is responding by getting a tad dirty brown along some beach areas of LBI. The side … 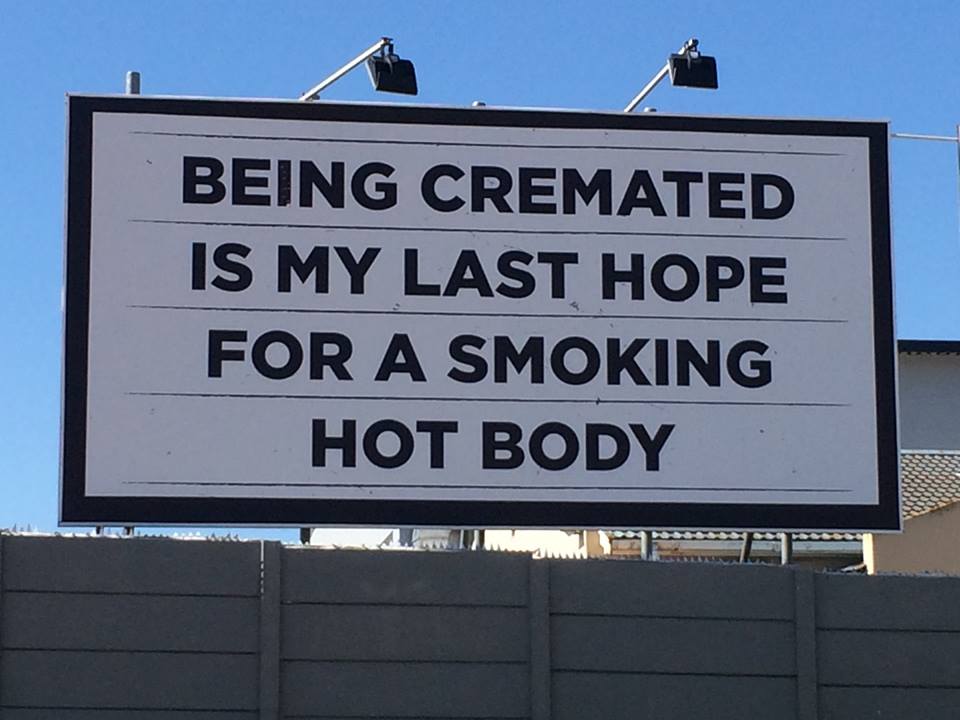 Monday, August 17, 2015: Hard south winds have taken control and the ocean is responding by getting a tad dirty brown along some beach areas of LBI. The side currents are also honking, south to north. That stir puts a hurt into surfcasting, however, the bayside is workable. Also, the leeward side of the Barnegat Jetty, where the winds will be at your back, are decent for jigging and plugging – but less so for bait fishing, which is always a battle thereabouts. Below: www.airphotona.com 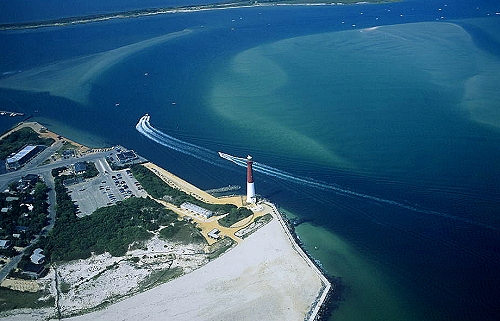 My largest fluke have come off those BL South Jetty rocks, by casting up-current (either incoming or outgoing) and letting a baited jig get dragged along the bottom by the currents. The way you know you’re hooked up is when the drift suddenly stops. You then have to quickly reel in the bow in the line and set the hook. A noticeable downside to this method is the way a fluke can easily swallow the entire offering before you can finally set the hook.

Jay Bailey caught this fish from the jetty. See www.onthewater.com 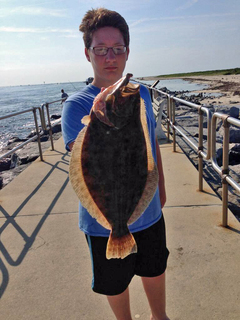 I had a couple reports of entire school of small (but not tiny) fish spraying out of the water near the inlet. These are way too large for mullet, spearing or bunker; plus, they’re too elongated and blueish. Sounds like some sort of herring or tinker mackerel, as they now have up near Shark River. 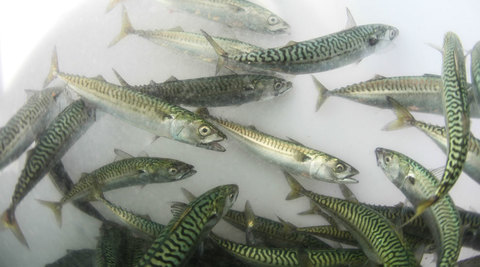 I’ll mention right now that it could be a banner year for anyone wanting to chum grass shrimp and panfish in Myers Hole. It done by chumming fairly heavily then dropping a shrimp or two in the chum line, using light gear and a small hook – and maybe adding a split shot. I used go hook-up crazy using a bobber. 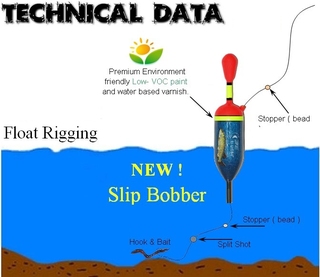 I know I’ve written this in here before but in single Myers Hole session I’ve taken over a dozen different species. Important: You have to go as near as possible to the drop off next to the beach. I work it from the bank. Yes, I chummed that way. Out too far and many of the species are too fearful of larger fish being drawn to the chum. 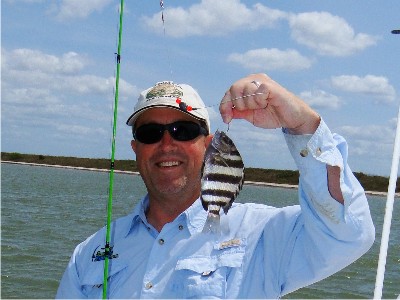 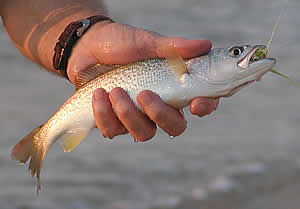 Below: Small red rum ... the spot is the giveaway. Below: Triggerfish and friends 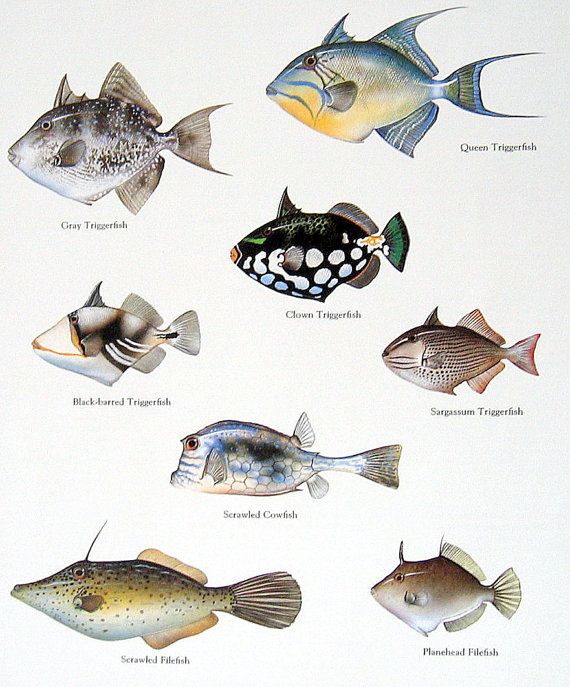 It was a quick trip but worth it. 4 keepers today !

Below: “Burning of the fag” ceremony.

This is my now-and-again thanks for overlooking the sometimes frequent typos I make in here, as I try to zip out these updates, without skipping a beat within my regular writing load. If given time to reread my writing, I can correct most misprints – and sometimes do in here, at a later date. Of course, there are always the allegedly inappropriate grammatical experimentation I constantly try, including my offering a veritable dictionary of my own wordage. While not quite glorious enough to be called something like Mannisms, I think they often get the idea across better than any known words. Hey, if a typo is egregiously wrong, let me know!

While this typo has gone rampant, I did it up real good  when I once miswrote, “For spirituality and a healthful nonsexist environment, Catholic schools easily have it over pubic schools.” Hairy buncha heathens.

And there was that time a buddy of mine suggested, for Daylight Savings Time, we should all “spring our cocks ahead.” Let’s see, that’s at 2 a.m. on the dot, right? I guess the clocks will just have to wait. For all of you out at a bar just around then …

I could have easily been guilty of the rapid headline that went viral just last month: “Wildfires Shit Down Highway.” At that point, I might have subhead, “And who’s gonna clean up this mess?!”

It was during a news exposé, that the immortal words came on screen, “School Is Two Easy for Kids.” Damn, straight. In fact, it might even be three times two easy, making it, uh, eighth times two easy.

Locally, I actually wasn’t all that put off by a single-page “Lunch Special” menu, which openly bragged about “Homemade Crap Dip.”  Hey, their Homemade Crap Cakes happened to be excellent. I know a good thing when I taste it.

And with all this controversy over the Chinse putting cheap substitutes in their American bound products, like Hoisin sauce, one must pause upon seeing a famed Asian restaurant offering dinners spiced with your choice of “Hot Garlic Sauce, Kung Pau Sauce, Mongolian Sauce, or (a house specialty?) “Human Sauce.” Uh, sir, do you know if that’s GMO human sauce?” At least there’s none of that stinkin’ flavor enhancer, LSD.

While one wouldn’t suspect racism in a book called “The Pasta Bible,” the first 7,000 copies were destroyed by Penguin Books following bad press over a recipe suggesting a sardine and prosciutto dish be spiced with “freshly ground black people.” Hell, even the Auto-Correct Spell program is thinkin,’ Where the hell did you get that from!?” Personally, I’d be just as happy topping it with a good “Dark Human Sauce.”

How about the written introduction, handed out at a ceremonial awards banquet, describing the honoree: “She has a wonderful smile and very genital manner.” Hell, I’m bettin’ she didn’t even need that wonderful smile.

Then there’s the newspaper obituary in which the family of the dearly-departed began a heaven-bound message with, “Dead Dad, we all miss you very much.” Needless to say, Auto-Correct Spell can sometimes be brutally honest.

Imagine becoming your school’s top homerun hitter to be listed in a yearbook ad as the top “Homerun Hitler” – coupled with an appreciative sign-off, “Love … Mom, Dad and Kota.” Hey, I’m bettin’ that’s better than a sign-off from The Arian Appreciation League.”

Finally, pity the MSNBC White House reporter who was recently doing a live broadcast from the Oval Office, while next to her, on screen, was the large colorful identifier: “MSNBC, Right Now … Nora O’ Connell, White Ho.” Hey, I give her full credit, she knows there is now more than one way to quickly cut through all that White House security red-tape.

Harvey Cedars is always the coolest spot in New Jersey!

Edward Plaskon Mako steaks on the hoof ... make that, on the hook. 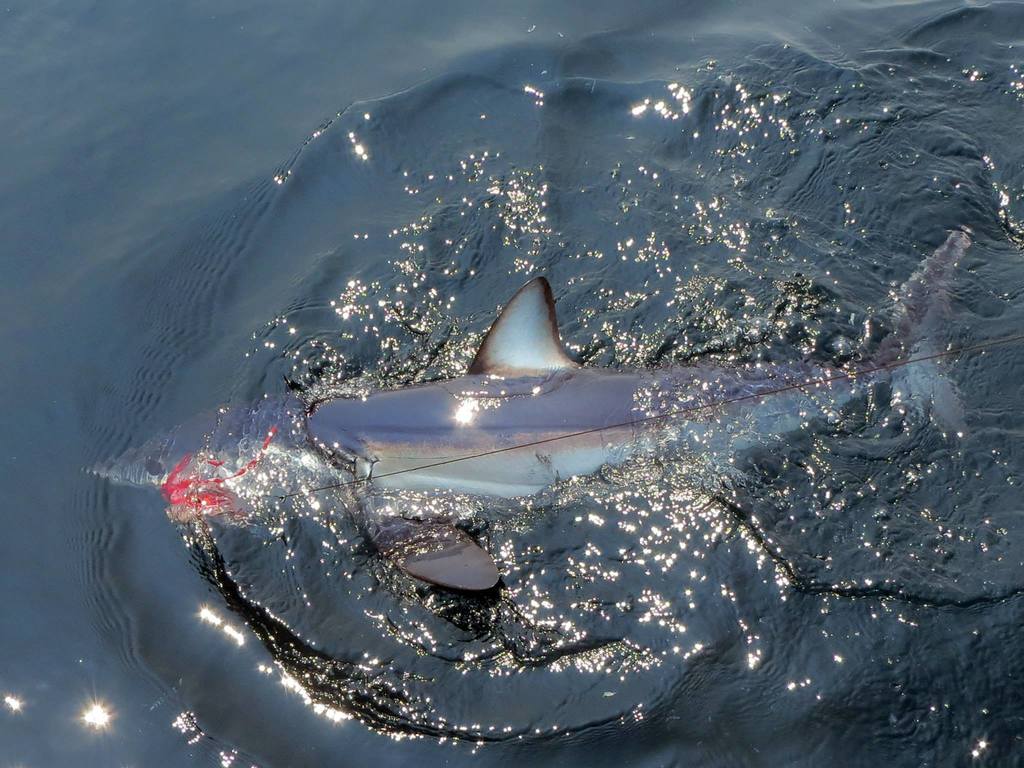 Epic weekend report up over at
Apex Anglers !!!