Wednesday, July 29, 2015: The winds were quite light this a.m. and allowed for some nice surfcasting and plugging in the suds. It was nice … not productive. Here's a Surf City beach look from today …

Wednesday, July 29, 2015: The winds were quite light this a.m. and allowed for some nice surfcasting and plugging in the suds. It was nice … not productive.

Here's a Surf City beach look from today (1 pm). It's one of my Weather Service video communiques.

The south winds have begun and could be a bit monotonous for days to come. Boat fishing is doable right up to the point it’s no longer doable. In other words, you head out and fish until the skies say no more. 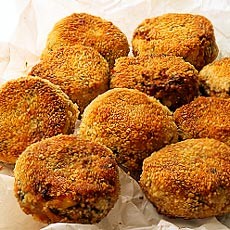 I was given a (jumbo) fish cake made of just-caught seabass. It was exceptional. The minced celery, crushed bagel crumbs, touch of wasabi and cilantro took it to a whole other level.

I got an email from a Save Barnegat Bay gal who fears the heat wave will greatly worsen the ongoing algae/slime problem. Dam straight it will. Somewhat counterintuitively, the low chance of rain might actually help the problem. The last thing we need is more fertilizer and petroleum byproducts entering the system and feeding any blooms.

I should mention that I got an email from a bay studier, saying the algal growth in B Bay is fairly typical for this time of year. The problem with that is the fact the bay is hurting worse than ever. A so-called “typical” hit does more damage than a typical hit in the past.

Below: Some algal blooms are worse than others. 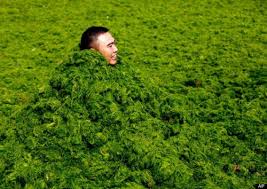 You might have read where the Loveladies oceanfront homeowners, commonly referred to as stinkin’ holdouts, have won a case against LBT and the state. Here’s one report, via http://www.newsworks.org:

The State of New Jersey and Long Beach Township must pay seven oceanfront homeowners for illegally taking their properties for six months for a storm protection project.

NJ.com reports that a state judge ruled that the property owners are entitled to fair market value and interest, along with a pro-rated share of taxes and attorneys' fees.

The July 16 decision is another domino to fall after the state and the Ocean County town attempted to obtain property easements from about 50 residents to construct sand dunes along Long Beach Island.

State and town officials are working out who will actually pay because although Long Beach Township took the homes, it did so under the direction of the state's Environmental Protection Department.

The homeowners filed suit against the government entities in November.

The names of the Loveladies homeowners will surely be published. We’ll then get an idea of who, exactly, is behind this lawsuit. I just have this sense they’re not true friends of LBI. However, I also sense this suit has not fully played out. I’m basing that on the Harvey Cedars suit that first went the way of the plaintiff with the state winning in the end. Also, I’m looking for all the details of the suit before taking things to the next level of scrutiny on these people.

As to the replenishment project: We’re in like flint. I couldn’t care less if some numbnuts are willing to go down with the ship just to have a better view of the ocean. Let ‘em sink in their own bulls***.

When future storms hit, Loveladies can kiss its own ass goodbye. After refusing this current project, any fixes – and they will be needed -- will come out of their pockets. What’s more, since it’s mainly the ocean-fronters who foiled the replenishment, other Loveladies residents will easily win a class-action suit against them, forcing the holdouts to assume the cost of what will amount to a personal beach fix.

Anyway, why are we so flinted in?

The amount of LBI beachfront now locked into 50 years of guaranteed federal replenishment is far-and-away enough to keep virtually all of LBI in solid sand, at least from Harvey Cedars southward.

I have repeatedly said that LBI could actually be kept knee-deep in beach sand by simply replenishing strategic beaches, allowing the sand to drift, in a littoral fashion, southward.  That strategy is not just a theory. It is already being done in some areas along the East Coast.

But are already graced with far more than just strategic sand pump areas. As of today, we have miles and miles of pumped in beachline – and more accruing by the Great Lakes moment. This might sound weird but we already have more sand than we can use.

Oh, I’m not being critical, mind you. Keep it coming, especially to the point where the down drift from south end replenishment saves my beloved Holgate end. I’m just saying that we don’t need no stinkin’ holdouts. Not that they’re going to get off that easy. I believe the holdouts need to be eventually singled out and seeded out -- marked as enemies of LBI. 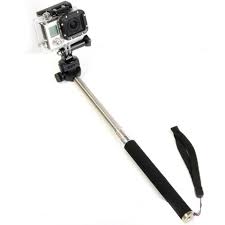 Yesterday a 14 yr old girl lost her GoPro hero (camera) in the ocean at the south end of town. I'm told the girl worked hard saving her own money to purchase the GoPro for vacation. Although the ocean claimed it, we want to get it back for her. The lost GoPro is gray and at the time it was taken by the ocean, it was attached to a short black selfie stick.

If you find a GoPro in the ocean or the surf, please call us or bring it to our police department at 8th & Blvd (inside Borough Hall). Let's turn this unfortunate loss into a good memory for this young girl!

Feel free to share this post with your friends. We will keep everyone posted if it is turned in.

Thank you for your help.

Below story: ... Sometimes the bears eat you. This man -- and crew -- were knowingly poaching in D-Bay. So that's that. He'll get his bell rung, more like jingled. Fines won't be near what he was making illegally so the deterrent factor won't be there, unless they confiscate his vessel -- and dumbly deprive him of a way to pay his fines ... by once again illegally fishing. As to the "conchs," they were obviously knobbed whelk, aka scungilli. Being near Philly, I'm guessing he had a decent market for whelks, an Italian/Euro favorite. Yes, the foot/meat of the smaller ones are more tender and sweeter than when the whelks reach legal size.

Back in the day, I gave away any whelk I got during clamming. The older Italian gals I gave them to loved me. Go ahead and snicker. Their kids and grandkids were made men (mobsters) and also loved me for helping out their moms and grandmoms. Hey, it's always good to have just such friends ... all because of whelk. 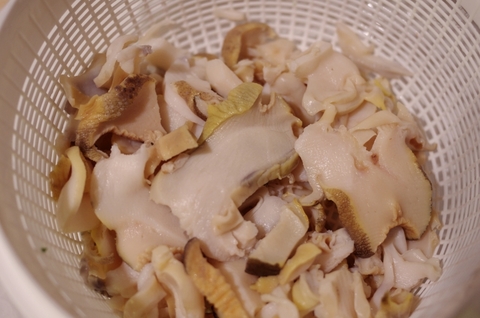 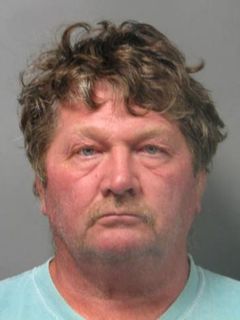 Officers from the Department of Natural Resources and Environmental Control arrested a New Jersey man on several charges related to fishing in the Delaware Bay.

Kenneth W. Bailey, 61, of Heislerville was charged with felony tampering with physical evidence, second-degree reckless endangering, unlawful possession of horseshoe crabs for use as bait without a valid receipt, and 103 counts of possession of undersized knobbed conch.

When officers approached Bailey’s commercial boat on July 24, he put the motor in gear and turned, almost causing a collision, according to the DNREC. Officers also saw his crew dumping several bushel baskets of conch into the bay after they had ordered the crew to stop.