"I knew I shouldn't have gone to the Old and New Shop to buy a toy for my friend's kid."

He'll grow up to be this:

Saturday, July 11, 2015: Just enough NE wind to crap things up a bit for boat fluking. The surf was also carped up, not by wind but what NE winds blow in, eelgrass. I usually don’t harp on eelgrass until it gets horrible -- and it was just that in many surf zone areas of LBI. I did a quick walk of the grassy wrack line, expecting to find at least one man o’ war. None. I’ve yet to come across one, though I sure haven’t been putting much time in along the beach, what with work and all. Plus, I’ve become something of a repository for any images folks capture of beached MoWs.
As you might have heard, there are some huge schools of cow-nosed stingrays heading our way. Some beaches in Cape May and Atlantic counties had them rolling in the shorebreak – like we had a few years back. 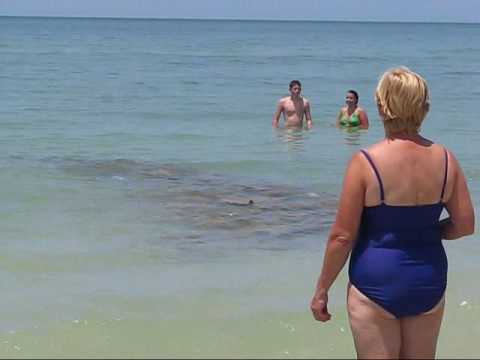 I can absolutely guarantee you there are sharks galore tailing them. Not to worry, those sharks are so well fed they couldn’t care less about any also swam humans. I think those rafts of rays should show here this coming week, though some ae already being taken in the LBI surf. They are fun and easy to catch with baited hooks (bunker, clams, worms) using either a bottom rig or a near-bottom float rigs. I’ve caught them on medium-sized bluefish rigs. The trick is not to go overly large with hook sizes or with the size of bunker chunks. While cow-nosed rays have large mouths, larger pieces of bait get them chewing – tap, tap, tap -- instead of committing to a take.

I’m not getting into handling landed rays with care. Most angler know that. However, do not let excited beachgoers try to get in close for a stingray “selfie.”

Below: Theses youngsters are smack dab at barb level. 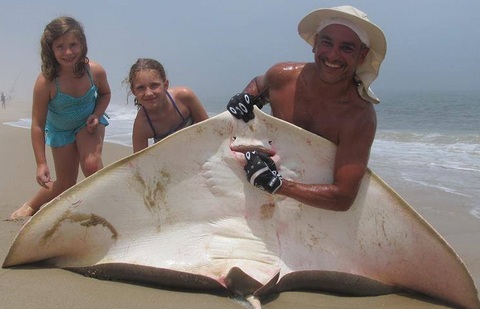 As to eating them, here’s a segment from a website called: www.forum.reddrumtackle.com: ;

Below: Dispose of any de-winged rays or save for shark bait. Might be best not to leave them on the beach like this. Gives the public a real bad impression -- in a shark-finning vein. The wings are the only edible part of both skates and rays. Remove them promptly and discard the rest of the body or use it for bait or chum. A sharp knife and a flat surface are required for removing the wings.

Pack the wings on ice in a cooler and then refrigerate or freeze them later. If you plan to refrigerate skate or ray wings for several days, leave them whole and packed in ice in the refrigerator. Some sources report that skate actually improves if left in the refrigerator for forty-eight to seventy-two hours. The texture is said to get firmer during this aging process. 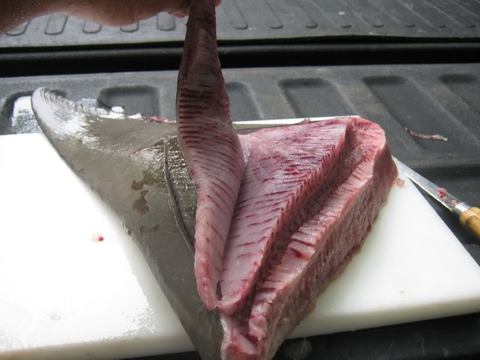 Skate can, however, be eaten earlier with good results.
To prepare skates or rays for cooking or freezing, fillet the meat from the whole wing. A sharp knife and cutting board are the only tools you need.
To freeze skate or ray, leave the skin on to keep the fillet intact. Wash each fillet carefully and freeze it as you would any other fish fillet. If the fillet is large, skinning will be much easier if it is first cut into strips two or three inches wide. Another way to skin the fillets is to poach them for several minutes in a solution of three parts water to one part vinegar. The skin should peel off easily after poaching.
Some cookbook authors suggest soaking skate and ray fillets in chilled salt water or vinegar water for several hours before preparing them. This will remove any ammonia or other off flavors that may have developed. If you have handled your catch properly, however, ammonia flavors should not be present. If you do wish to soak your fillets, use a solution of one cup of salt or one- half cup white vinegar for each gallon of water.
Skate and ray fillets are lean and light colored. An unusual delicacy, they have a firm texture and can be prepared by any cooking method used for fillets from fish with similar characteristics. Poach them, bake them, bread them, or fry them in the oven, a pan, or deep fat.
Ted A. Hamilton, (aka Salvo Jimmy)

Below: Kayaker discovered a stingray wing can easily fool a gray suit. 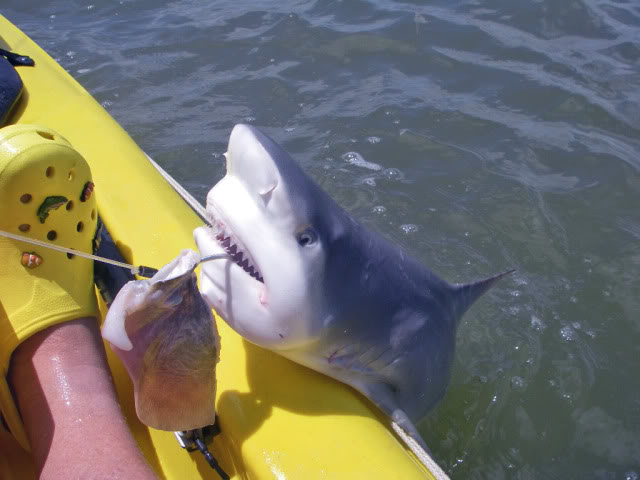 "This kitten is healthy and playful and .... uh, not overly fond of snakes."

And down Outer Banks way ...

Nephews had a day to remember