Too busy to write today ... maybe later  Check this video: Sand tiger shark makes a great guard dog for fish monger ... (I know I put it up last year -- but with all the shark commotion ...)  htt… Check this video: Sand tiger shark makes a great guard dog for fish monger ... (I know I put it up last year -- but with all the shark commotion ...) In the world of big-game fishing, a successful outing does not necessarily depend on how much you know, but whom you know.

Ward Michaels can attest to this. The Florida fishing guide, who has traveled to Costa Rica more than 80 times over the last three decades, recently landed an enormous snook that could net the angler an all-tackle world record (heaviest of its species).

The Pacific black snook tipped the scale at 60 pounds. Michaels planned to submit details of the catch to the International Game Fish Association.

If approved–the process can take several weeks–it will eclipse the current record: a 57-pound, 12-ounce black snook caught by George Beck at Rio Naranjo in Quepos, Costa Rica in August, 1991.

Michaels' catch was one of several giant snook that he and three friends from Texas landed during a three-day expedition along Costa Rica’s central Pacific coast.

According to Florida Today, they attribute much of their success to Michaels’ friendships with native native commercial fishermen, notably Big John and Jeffrey, who led the expedition.

Michaels, 52, owner of Michaels Hunting and Fishing, Inc., in Orlando, planned the trip to coincide with spawning season and a new moon cycle. Female snook would be heavy with eggs, and they’d be feeding aggressively in daylight hours, after the dark of the new moon nights. Michaels telephoned his Texas friends and told them to catch a flight.

“I told them to come on. The time is now,” Michaels told the Florida newspaper. Big John and Jeffrey led them to a sand bar inhabited by female snook in the pre-spawn stage.

The anglers slow-trolled sardines over the sand bar, at a depth of about 30 feet, and the fat snook could not resist the offerings. In three days the anglers landed several in the 30-pound class, but also behemoths weighing 47 and 50 pounds.

“The last day we caught four over 40 pounds,” Michaels said. The 60-pounder was not weighed on an IGFA-certified scale, but the scale they used was being checked for accuracy.

“I’ve been talking to people at the IGFA and they said there wouldn’t be a problem,” Michaels told Florida Today.“People in Costa Rica are working on it. It’ll require a lot of paperwork but it’ll get done.”

Costa Rica is known for its large snook, which can also be found on the Caribbean coast and inland tributaries. Several line-class records have been set in the Central American country.

“You’re always happy to get 30- to 35-pounders but to find fish of this size in one area is unbelievable,” Michaels said.“I’ll probably never see it again.”

But he’ll certainly try. Michaels is planning another trip, this time with his 8-year-old daughter. And one cn assume that it will coincide with the new moon cycle, and include pals Big John and Jeffrey.

“I can only thank my commercial fishing friends,” Michaels said.

Is it me or is the  fishing season flying by? After a late start to a short, but sweet
springrun, it seems as though the summer season arrived right on schedule. I was hoping for an extended spring run, but it seems we've transitioned into our summer fishing patterns as the striped bass and big bluefish continue their northward migration. Summer flounder action seems a little slow as the back-bay flatfish are heading towards the inlets, but the wreck and reef action isn't on fire yet. As far as I can tell, the spotlight appears to be shifting over to sharks and rays. Coastal-water temperatures range from close to 75 degrees at Atlantic City to almost 80 degrees down in Cape May.


Speaking about things flying by and moving along, I received a letter from the American Littoral Society (ALS) the other day regarding a fish I tagged at the Delaware River this spring. I tagged and released an 18-inch striper on 4/9/15 and it was recaptured fifty-five days later on 6/3/15 at Kittery Point, near the New Hampshire/Maine border – that's nearly 400 miles as the crow flies and much longer for a striped bass considering it had to swim south out of the river, down through the Delaware Bay and then north along the beachfront to Maine. I had no idea the smaller fish travelled so far so quickly. I shared the news with my Dad and Jake, as they were present when I tagged the fish. It seems like that little striped bass wanted to get as far away from us as it could!

From the Delaware River to Maine in 55 days!


I'm still fairly new to the fish-tagging scene, but I've found the experience to be incredibly enjoyable. I started tagging in late October of 2013 and my only regret is I wish I started years ago. To date, I tagged forty-one (thirty-nine striped bass and two summer flounder) fish and I received four (three stripers and one summer flounder) returned tags. I do not take my tagging gear with me on most trips as tagging fish does require a little extra time and effort so I usually plan my fish-tagging trips in the spring and fall when I'm most likely to find numbers of migrating fish. For more information on the American Littoral Society's Fish Tagging Program, please contact Jeff Dement at Jeff@LittoralSociety.org or (732) 291-0055 ext. 106.

I love getting mail from the American Littoral Society!


On Sunday, July 12, we had a family get together in North Wildwood. I traded my fishing rods and tackle bag for beach blankets, picnic baskets, chairs, sunscreen, bug spray, coolers, beach bags, Frisbees and footballs. We arrived early and set up just a few blocks south of Hereford Inlet. I have to admit, I felt a little out of place being near the water without my fishing rods, but we were packed for a day of fun in the sun. As luck would have it, while lugging way too many items over the dune towards the beach, I looked out towards the water and saw two gigantic schools of bunker about 100 yards off the beach. As I set up what seemed like a small town on the beach, Jake headed for the water and said he saw two sharks just a few feet in front of him. I headed out to see for myself and sure enough, I spotted a few sharks working the backside of the sandbar. As far as I could tell, they were small (3 to 4 foot) brown sharks, otherwise known as sandbar sharks and very common in our waters. The bunker schools quickly pushed offshore as they were worked over by what I assume were more sharks. We spotted a few more sharks and a ton of dolphins throughout the day. We had a great time, but I wish I packed a rod!

I haven't spent much time targeting sharks or rays, but I have caught a few while fishing for other species such as summer flounder, weakfish and late-season striped bass. Over the years, I tussled with a few smaller brown sharks, a couple southern rays, a gigantic butterfly ray and countless cownose rays. The sharks and rays provide a great sport, especially on light tackle, but I just never got into them. After reading some recent reports and seeing a ton of big fish beach photos, maybe it's time to reconsider?

While I may be tempted to try a trip or two for sharks, it's going to be difficult to pull myself from the recent stretch of great freshwater action. The largemouth bass bite has been outstanding, as Jake and I continue to experience quantity and quality on most of the nearby lakes and ponds. Top-water plugs, frogs, plastic worms and big, live baits are working well. The recent storms have the water a little off color, but the fish don't seem to mind. Docks, bridges, dams and patches of lily pads are yielding good numbers of quality fish. Big bluegills, crappie, yellow perch and pickerel just add to the fun. If you have a chance to visit a neighborhood pond or lake one evening, I promise it will be worth your while.

July 16, 2015, New Jersey/Delaware Bay Fishing Report with Jim Hutchinson, Jr. – A great white shark off Sandy Hook while fishing for fluke? The summer of the shark continues as The Fisherman tracks down local photo that clearly shows a great white shark (with what appears to be a fluke rig hanging from its maw) while recent video of a shark caught of Sandy Hook last week while ‘fluking’ is certainly not a thresher or sandbar. The makos have mostly moved off, but big sharks continue to take baits inshore, with a thresher topping 500 pounds caught at the Mud Hole, along with browns and sand tigers along the Jersey beaches.

In South Jersey, a 50-pound cobia was taken on a bunker chunk off Avalon earlier in the week, as more and more summer visitors are showing along the beaches with bunker schools hanging around inshore. There’s bigeye and bluefin in the deep, while summer flounder action is starting to really take shape with more and more 8- to 10-pound plus fish piling on bucktails and Gulps!

In our weekly report rundown at TheFisherman.com, we’ve also got word of some decent fluking in the suds as well, and with high water around mid-day this weekend, you have some time to hit the open beaches on incoming water before the bathers and lifeguards take your hotspots away!

Check out our video forecast for the July 17-19 weekend action, and look for the ‘Click Here For Video’ icon to see for yourself if that’s truly a great white shark on a fluke rig!

Appropriately enough, the move JAWS hit theaters 40 years ago this month – and you thought you didn’t need a bigger boat! 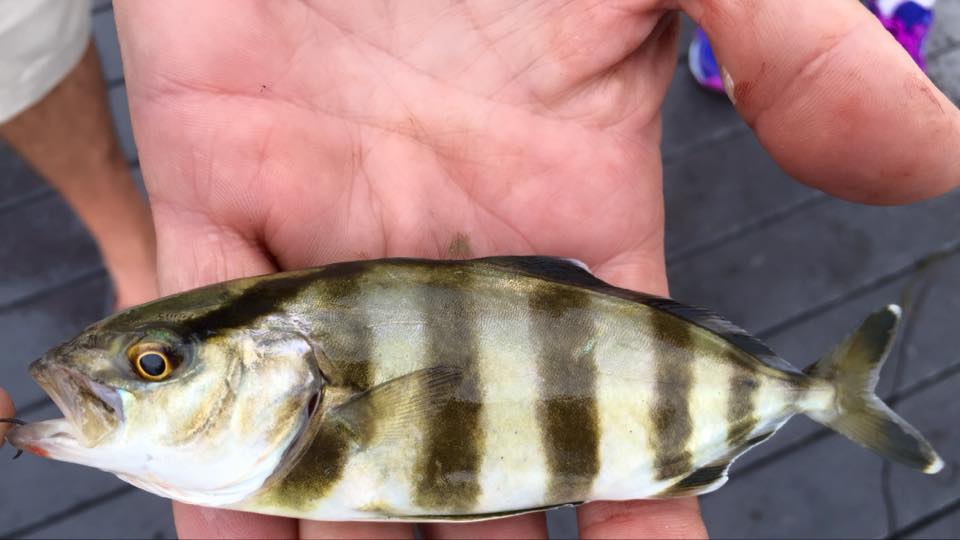 It's a type of amberjack -- one of the smallest. The pilot fish is very similar looking 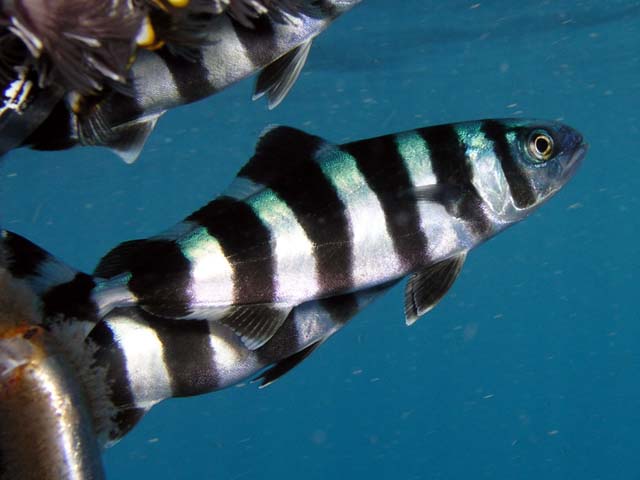