First and last day at the new shark-petting park ...  Thursday, April 23, 2015: I’m getting a real decent flow of striper reports, both LBI and south (Graveling and – more so – up river). The prob…

First and last day at the new shark-petting park ...

Thursday, April 23, 2015: I’m getting a real decent flow of striper reports, both LBI and south (Graveling and – more so – up river). The problem with reports this time of year is the truly come-and-go nature of spring hooking. Even when going to where fish had been the previous day (or less) and the hooking could be stone-cold dead.

I get to seriously wet a line tomorrow – in the LBI surf. The (decreasing) west winds should have conditions highly workable, meaning easy casting and lighter rod and reel set-ups. I always kick off my plugging/artificial season by tossing eel-ish plastics. Out of tradition, I first use original Felmlee eels I throw on Kalin bullet leadheads. I’ll then try some of the company’s newer pre-rigged eel imitations. Finally, I go to eel-look Fin-S. I believe they’re technically called the “Arkansas shiner.” I’ll catch hell for saying this but I don’t use or recommend live eels, rigged or otherwise. I feel the stocks are still too iffy.

A trick I’ve noticed for swimming spring eel plastics is to run them slowly in the mid to low water column – not too high and not in the sand. Also, I hate to say it but a very steady, slowish swim works better than a jigging action. Boring – but effective. Yes, I realize the blues are back in town but they’re presence is sketchy enough that I think I can get around them when using plastics. That does not apply as much for boat fishing. If blues are anywhere near a vessel, they’ll find that plastic -- though, when I’m targeting blues, I can sometimes take two or three on a single plastic before it gets shredded beyond even bluefishing usability.

There is an oddish angle on the first blues in town. Their size. I just got back to the dock from a quick little recon trip and we had solid rod bending , reel screaming action today with big slammer blues in the 5-8lbs range today ! These were not your spring weary racer bluefish but healthy feisty powerful slammers!!

We are catching these brutes in the shallows which makes for awesome visual strikes and powerful "heading to the horizon" runs which is a light tackle enthusiast dream! 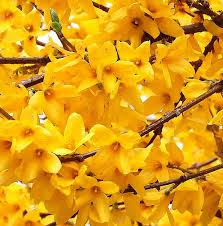 BLOOMIN’ BONANZA: It might be me, coming off a bleak-ass winter, but I’ve never seen early explosion of blossoms like I’m seeing out there, particularly the forsythia on the mainland. It gets no yellower that that. Explosive. There might also be science behind the seeming epic show of color. An icy winter puts plants into an especially deep freeze, whereby the fully shutdown. No surprise midwinter awakening due to blast of mild air. That takes energy (sugar). Not unlike a human that gets a perfect night’s rest, plants awake from a deep sleep with all flowering guns blazing.

A wicked winter might also perk an earlier-than-usual plant awakening. Yesterday I saw some weeks-early rhododendron purpling outward. They were also as deeply pigmented as I’ve ever seen.

This blast of blossoming could get its bell rung tonight with freezing temps in the woods. The up side is the wind will be pretty brisk out of the west. That will keep the temps from really going sub-freezing. Still, my cranberry bog buddies have to be sweating it a bit as buds are starting to show. 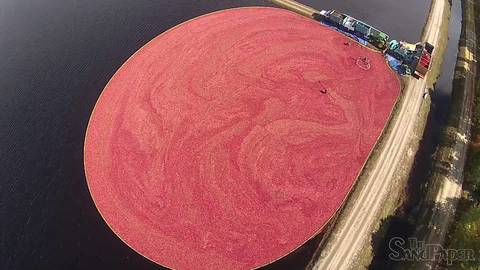 Are your just-transplanted backward garden plants at risk? It’s just on the cover, if you can easily over them – to hold in the warmth from the ground – that might be a worthwhile move. The already-sprouted chives, tulips, radishes and such won’t care. They’re brutes. 2 hrs ·
TBT: There is a wonderful story that goes along with the enclosed image. My Ship Bottom Grandparents rented out their back apartment, along with several rental cottages they owned. Our good friend Tom Tatlow (deceased in 2000) was telling me a story about when he was a kid, they rented an apartment in Ship Bottom, and he had his picture taken with a life guard.
That picture was used by a local Milk Company for their Calendar. He showed me the calendar, and a print that the photographer gave him. When I told Tom that the photographer was my father, we could not believe it. The photo and print were made in 1935. He told me this story about 65 years later. Of course our LBI friends all know Ginny Tatlow, and she just loaned me the print of the little blond curly headed kid and life guard. The life guard's shirt says "SBBA" which was Ship Bottom - Beach Arlington. Later the two towns merged into Ship Bottom. I scanned the print, and also the back of the print because my father's sticker and some hand written notes were on it. Even more fantastic is I found the original negative for this image, so I can really blow it up big.

Here is Little Tommie Tatlow in 1935!

For the most part, we humans can live our lives entirely untroubled by the doings of phytoplankton.

These tiny, largely single-celled marine organisms are, basically, little photosynthesis machines — they contain chlorophyll and process sunlight to create energy. It might sound relatively dull — but according to new research, this simple lifestyle could have major climate change ramifications.

The new study, just out in the Proceedings of the National Academy of Sciences, finds that as the Arctic Ocean warms and loses its sea ice cover, populations of phytoplankton will boom. This will, in turn, further amplify warming in a region that's already heating up twice as fast as the rest of the planet.

The reason is that phytoplankton, when they are more numerous, lead to a warmer upper layer of the ocean, because more radiation from the sun is trapped in that layer. Phytoplankton are thus changing the "physical property of the ocean," says lead study author Jong-Yeon Park of the Max Planck Institute for Meteorology in Hamburg, Germany.

"If there is more phytoplankton in the ocean, then more shortwave radiation, radiant heating appears in the upper ocean, and less sunlight can penetrate into the deeper ocean," Park says. "So, basically, it can change the vertical distribution of ocean heating."

In effect, this finding adds additional oomph to arguably the most famous "feedback" process in climate science, known as the "ice-albedo feedback" (albedo refers to the reflectivity of a surface). In this widely accepted feedback, global warming leads to more melting of ice over the Arctic Ocean — which in turn exposes more of the ocean surface to the atmosphere. But because the ocean surface is darker than ice, it traps more heat, and thus warms up still further.

Now, it looks like these tiny marine organisms are further amplifying the warming ocean side of things.

The research was performed by using a climate model to simulate a one percent per year increase in atmospheric carbon dioxide levels, until a full doubling of total carbon dioxide occurred. The model simulated not only the general circulation of the atmosphere but also the response of ecosystems; in one case, the model included the phytoplankton feedback, while in the other it did not.

It was already known that phytoplankton affect climate by taking in carbon dioxide and giving off oxygen. That could actually be good a good thing, as it means less carbon dioxide in the air. But this new climatic role, centered not on chemistry but on how the density of Arctic phytoplankton in the upper layer of water leads sunlight to be trapped there, cuts in very much the other direction.

The study also notes that observational evidence suggests that in the Arctic, a "pattern of increased annual mean chlorophyll" in waters is "closely linked with that of surface warming and ice melting trends." All seem to be increasing in sync.

How much does it matter? The study finds that this feedback could amplify warming in the Arctic by 20 percent. For a doubling of atmospheric carbon dioxide levels, says Park, that means a warming of 3.8 degrees Celsius, rather than 3.1 degrees Celsius.

The consequences could be faster sea ice decline and more areas of open water in the Arctic, further enhancing — that's right — phytoplankton growth.