(Above map is for perspective only.) MARINER REPORT … LE INLET (NORTH AND SOUTH CUTS) AND OYSTER CREEK 40. LITTLE EGG INLET INFO: Regarding Little Egg Inlet’s south cut, I had a long chat with a Se… 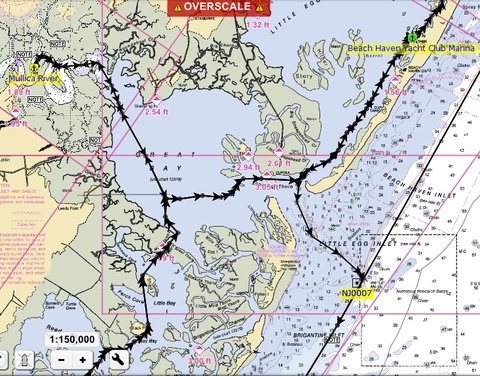 (Above map is for perspective only.)

LITTLE EGG INLET INFO: Regarding Little Egg Inlet’s south cut, I had a long chat with a Senior Officer Behr at Cape May Aids to Navigation and was told the seasonal/lighted buoys are now in-place for the summer. What you see it what you get, so to speak. The buoys are placed the same as last year, pending any tweaks to the buoys throughout the summer.

Tweaks are based on mariner reports and also via observations from Coast Guard vessels traversing LE Inlet.  Any changes in navigational aids will be announced via broadcast and on-line. “If we get any reports of buoys off-station we will move them as needed,” said Behr, adding. “We just try to mark the best water that we can. If we know there is a shoal moving in, we’ll get a notice to mariners.”

Behr said initial reports from mariners this spring seem to be upbeat. “Luckily, it seems that the (south cut) has cleared itself out a little more. It’s much deeper in some places.”

As to the north cut, there are no plans to mark that popular piece of the LE Inlet, often referred to as Beach Haven Inlet, using its former name. While the USCG cannot recommend using the north cut, Behr said, “You go anywhere you have good water. It’s up to you personally.”

Below: North and south cuts. This look is for perspective only.] I was surprised to hear that neither Little Egg Inlet’s north nor south cut are federal waterways. I’m sure that could play into how readily they are dredged by the feds. Behr noted that even if plans were made to dredge LE Inlet south cut, it couldn’t happen this boating season due to paperwork. As I’ve discovered at every turn, finding environmentally acceptable ways to dispose of dredge spoils is a spoiler. 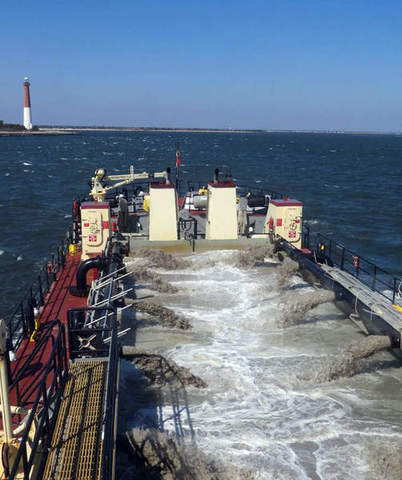 IN THE NEWS: Channel 10 News, Philly, was down to do a story on the woes and worries surrounding Little Egg Inlet, which can get so shoaled that it takes a snake trainer to work a vessel toward open water. Forget coming back in. Capt. Camarda (Miss Beach Haven) was showing the news folks the problem. Look for that broadcast this evening. I’m not a hydrologist but I’ll bet the barn that much of the sand driving LE Inlet boaters batty is arriving from the Holgate erosion. Yes, some of that erosional sand  has gone to the outer shoals but most is finding its way around Holgate point (The Rip) and out toward LE Inlet.

Why isn’t the North Cut filling in with all that on-the-move sands? Actually, it is also filling in, as a number of vessels found out when they drifted a bit too far south of the cut at low tide and ran fairly solidly aground.

The north side of the north cut has remained relatively open due to the scouring action of tidal flow, which can exceed five knots. The water is often the deepest closer to LBI – especially around the bend at the west peninsula, where the water is over 25 feet deep, flush against Holgate.

All that considered, the sand will surely keep pouring off Holgate and into LE Inlet. Even if it is dredged it would likely need Currituck type regular deepening. The upside to such hopper-dredging is how close  the outer shoals are for the offloading of dredge material. The set-up is not unlike Barnegat Inlet and its outer shoals just to the south.

What happens in a couple/few years when clouds of sand from replenishment reach LE Inlet? It’ll be dredge or die, to be sure.

UPDATE ON 40 BUOY AT OYSTER CREEK: It’s gonna be a real tough boating summer in that part of Barnegat Bay, per the USCG, whose Aids to Navigation vessel was thoroughly grounded just trying to get in there. It never made it in. The USCG is running ongoing mariner broadcasts/warnings about the shoaling near 40. The Army Corps is fully aware and dredging might be in the offing thereabouts. I believe that is a federally recognized waterway.