Wednesday, February 18, 2015: The beach drives are fully hazardous, mainly where sand-ice blocks the way. Sand-ice are those chunks of breakaway beach that get deposited at the high tide line -- and often cross the entire beach. They feel like a rock when driven over.

Here's a Facebook pic of sand-ice by Angela A.: 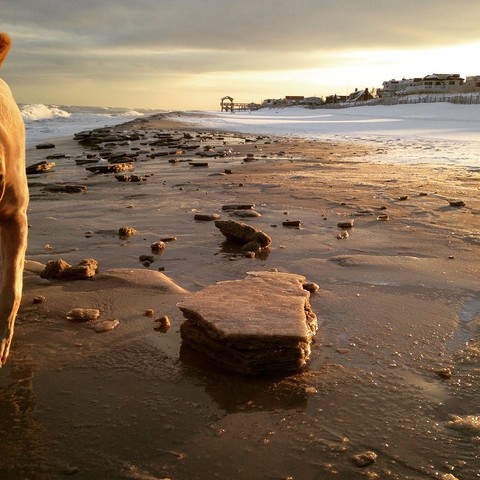 Folks have been asking about snowy owls but talk about a hard sighting. A snowy owl ... sitting in snow. I don't even try. Plus, as noted, you can't drive high up on the beach due to those chunks of winter sprawled all over the upper beach. Driving way down on the wet sand makes seeing any perched owls over on the refuge doubly impossible.

Below: Trolling for retrievers ... Gotta remember that color pattern.

I scoured the huge ice floes coming out of the inlet with my binoculars. I didn't see a single seal, which usually love to ride atop the moving ice. Maybe the ice-riding novelty has worn off for them. Or, maybe they realize Florida isn't all that far off. You'd be amazed at how quickly southbound (migrating) creatures can reach the Sunshine State when they swim 24/7 and get to beeline down the coast. We're talking less than  week -- providing there aren't any minor delays, like being eaten. I'm basing that on some studies following southerly-migrating fish fitted with tracking devices.

(Below: Corncobs hit a bump in the road.) 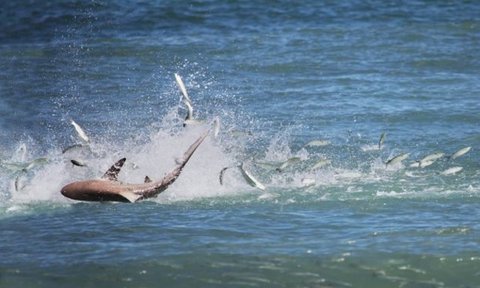 Here’s one of the cool ice pattern things along the Holgate front beach. Still and video … Owl was difficult to find and photograph today... White owl on snow and ice = wtf was I thinking?

Be extra careful if driving the beach also... Being out when there's snow/ice is totally different than regular sand. Gotta have confidence and prior knowledge of where you can/can't go.

Wouldn't advise boating either. Monster ice bergs going out the inlet. Looked like the Bering Sea on deadliest catch.

The importance of taking road signs seriously .. if not literally.

This is exactly why you should never go last ...

Even in Florida they quickly discover the folly of a frozen water balloon fight ...

Ever lived outside of Louisiana and longed for boiled crawfish? Or do you have out-of-state friends or family who lust after your boiled crawfish photos on social media?

Those crawfish cravings may be a thing of the past. Whole, boiled crawfish can now be found in the freezer section of Wal-Mart stores across the country.

“It’s been very well received,” said John Forrest Ales, spokesman for Wal-Mart. “The Gulf region is obviously our strongest market for these products.”

The whole, boiled crawfish aren’t exactly a new thing. They’ve been offered for about 10 years, but for most of that time, the only brands selling the product used imported crawfish from countries such as China and Spain.

“This is just an example of how we’re supporting American jobs and American manufacturing and production,” Ales said, referring to Wal-Mart’s 10-year plan to purchase $250 billion in American products to grow U.S. manufacturing and job creation.

Riceland Crawfish of Eunice is the company that provides Wal-Mart with boiled crawfish for its freezer sections.

Guillory has worked with Wal-Mart for about 20 years now.

“You hear some Wal-Mart stories that are not so positive, but we have not experienced that,” he says. “Wal-Mart has been a great partner for us and has really helped us succeed.”

The frozen, boiled crawfish come Cajun spiced with their heads and shells intact, and consumers need only steam and peel the crawfish before eating.

So how does the frozen version of a boiled crawfish compare to the fresh version?

“You surely can’t beat fresh,” Guillory says. “But with that in mind, it’s a very good product. It’s like anything else. Fresh is always better, but we get very few, if any, complaints. People are very satisfied.”

Jody Meche, a third or fourth generation crawfisherman, says the whole, frozen crawfish are a good product that he would like to see more Louisiana producers selling.

“Crawfish is a Cajun culture product,” Meche says. “We have a lot of history and heritage behind our product. I would love to see the Louisiana markets and people benefit instead of China or Spain.”

State Sen. Fred Mills, R-Parks, has long fought for the promotion of Louisiana seafood and the clear labeling of where seafood originates to better inform consumers where they’re money is going.

He supports the idea of whole, frozen crawfish as long as people are paying attention to where the products come from.

“The thing that worries me about these products is that I don’t want people to have a bad reaction to eating bad imported crawfish that would taint their opinion of Louisiana seafood and crawfish,” Mills said.

Ben Berthelot, director of the Lafayette Convention and Visitors Commission, says it’s a shame that other countries are trying to replicate something that is so Louisiana in nature.

“Everybody wants to be Cajun and Creole,” Berthelot said. “It’s not surprising to see people want to take advantage of that.