Full-frontal blonde photo moment????  Saturday, March 14, 2015: OK. Enough with the rinse cycle. Halfway through this rain session, all the road salt has gone to the great bay and ocean hereafter.…

Saturday, March 14, 2015: OK. Enough with the rinse cycle. Halfway through this rain session, all the road salt has gone to the great bay and ocean hereafter.

Also, virtually all the snow and ice is gone, except for some plowed piles, which will likely be here through August.

Holgate is looking good, as the frozen sand below has gone. Most areas of the front beach are passable, high and low. There are still some sinkholes just above the wet sand zones -- as is the case with LBI front beaches. This rain will force the air out of the sand, making it more driveable. We only have a few more weeks of Holgate before the April 1 closure. Drat.

I saw two snowys yesterday. Both were way down next to the bay, as was the case my last trip down there. I still say they're feeding on carcasses.

Did some wrackline exploring on the bayside. Found mint condition camo gun bag and four working decoys on a single line.

I believe next week is the fishermen's cleanup of Holgate. I'll get more on that now annual event.

Below: One of two bayside snowys I saw yesterday.  Telephoto. 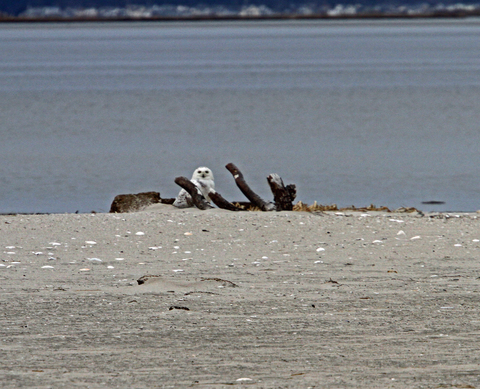 This inch-plus of rain we're getting is performing a pond-filling task that can mean life and death for frog populations. Vernal (springtime) ponds (spring begins next week) are temporary water collections that can make or break upcoming frog spawns.Most often, they are low-lying areas that aren't quite wetlands.

Undoubtedly, more than a few amphibians didn’t make it through this frigidly-fanged winter.

While a few types of frogs can take being frozen solid – and bounce back in spring, ready to rock the ladies – more sensitive species, including our beloved Pine Barrens tree frog, can’t always complete successful freeze/thaws. They croak. That so-called attrition factor adds an even greater emphasis to the need for healthy, happy vernal ponds, which create the ideal short-term environment for successful spawning and repopulating.

That “short-term” concept looms large. Vernal ponds – which often manifest as dirt-road puddles – must hang in for the time it takes for the frogs to spawn, the subsequent eggs to develop and hatch into tadpoles -- which then need a goodly detritus-feeding stint before hopping away from their rapidly evaporating birthplace. Skimpy spring ponds can be awful places if loads of tadpoles have the water around them run dry, mid-metamorphosis.

Yesterday, I was out along Route 9 – not far from SRHS – checking wet areas where I used to do successful frog counts. Be it the current road material runoff or simply mankind on the move, many of those wet areas were putrid. Oh, there was plenty of water but the water was literally a turbid, chemical slurry. Nothing can spawn – or survive – in it. At one highly polluted spot, the culprit seems to be recently installed four-foot wide sewer pipes, meant to alleviate road flooding toward Hilliard Boulevard.

On the up side, the further I got away from 9, toward the old railroad bed and south, waters had cleaned a bit. It’ll be interesting to see if there’s frog calling action in those only semi-impacted places.

For you into herptile lovers, I work that area during frog counts because of its colonies of rare Cope's gray tree frogs (Hyla chrysoscelis), which are nearly identical looking to your more common  gray tree frog (Hyla versicolor) except for DNA and, more significantly, a different sounding call. That difference in call is everything since it prevents cross breeding.

Here's a video of me counting at a vernal pond: http://www.youtube.com/watch?v=UTEUNW6KxIw 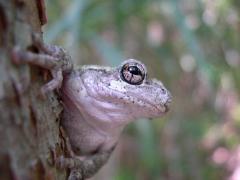 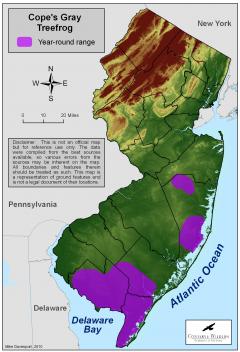 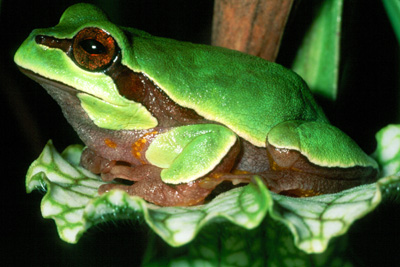 By the by, the hugely popular Pine Barrens tree frog (Hyla andersonii) is not as reliant on vernal ponds as other frog species in NJ, though they do utilize them in a few sites I know along Rte. 539, not far from 72. Many of my best annual count areas for Pine Barren tree frogs are adjacent to small lakes that hold water year-round. Still, the presence of vernal ponds increase the chances of these famed tree frogs maintaining healthy populations within their current range.

While fully deserving of its threatened and endangered species status, those areas where the Pine Barrens tree frog find adequate spawning potential and undisturbed year'round environment, they flourish.

Here's a video from last spring, as I did a Hyla andersonii count. The mallard sounding call is the H. andersonii.  http://www.youtube.com/watch?v=PwAsb1yuKNI

The Wilderness Systems ATAK is ready to take the kayak angling world by storm. Watch the full video and learn everything you want to know about the ATAK!

The new Wilderness Systems A.T.A.K. – Advanced Tactical Angling Kayak – is fully equipped and in position to take the kayak angling world by storm. The A.T.A.K. borrows some DNA from the Ride and Thresher models, but is unlike any boat on...

just because Barnegat Bay was iced over does not mean the food web crumbles. Got these yesterday