I'm perfectly drive to fine ...  Thursday, March 05, 2015: looks like we will achieve that 6 to 8-inch covering of wet thick snow, as opposed to the blowy snow we’ve had during storms to this poin… 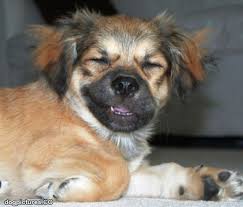 Thursday, March 05, 2015: looks like we will achieve that 6 to 8-inch covering of wet thick snow, as opposed to the blowy snow we’ve had during storms to this point.

To think this falling snow – and related road and walkway slush will fresh to rock with tonight’s single-digit lows – and stay that way for 48 hours. Then, temperatures turn the bend for a rapid climb.

Useful information: The average number of calories burnt shoveling snow is something like 300 to 350 calories per hour, per www.fitday.com. Oh, the number of people who die in the US from heart attack/disease is about 600,000 per year. There’s probably some math that should be done I there somewhere.

Memory isn’t what most people think. If you concentrate too much on memory, it purposely hides. The problem arises when you begin to wonder if you’re losing your memory.

Just worrying about losing one’s memory thwarts the memory’s ability to be itself, to move freely. How often has something you’re trying so hard to remember come to you as soon as your stop trying to remember it? I can’t remember how often that has happened to me. It shows that memory doesn’t liked being bothered. It’ll show up when -- and if -- it’s good and ready. No amount of prodding, worrying or hurrying is going to change its mind about when it’ll make its presence known.

The most important thing to remember about memory, as you get older, is the fact you’ve always pretty much sucked at remembering things. Getting older barely enters into it. It has always been, “Oh, that’s the weird guy that used to be on whatever that show was with the scary house with big doors and that talking hand … and the goth woman with the boobs.”

Thing. The thing at the big doors was called Thing, in the show called “The Addams Family,” with the weird guy, who was called Gomez, who was John Aston in real life, and it was a hot Carolyn Jones, who was the boobsy Morticia.

Now, see, that’s some serious, upper-shelf memory flow -- which, in my case, was my instantly remembering to Google “The Addams Family.”

So, here to fore, those of you fearing you’re losing your memory, simply remember to always keep a direct line open to Google -- and also to never drink a glass of anything clear before sniffing it thoroughly – and Googling “What should I do before drinking a glass of something clear?”

The American Heart Association says that for most people, shoveling snow may not lead to any health problems. However, the association warns that the risk of a heart attack during snow shoveling may increase for some, stating that the combination of colder temperatures and physical exertion increases the workload on the heart. People who are outdoors in cold weather should avoid sudden exertion, like lifting a heavy shovel full of snow. Even walking through heavy, wet snow or snow drifts can strain a person’s heart.

·
Give yourself a break.
Take frequent rest breaks during shoveling so you don’t overstress your heart. Pay attention to how your body feels during those breaks.

·
Don’t eat a heavy meal prior or soon after shoveling.
Eating a large meal can put an extra load on your heart.

·
Use a small shovel or consider a snow thrower.
The act of lifting heavy snow can raise blood pressure acutely during the lift. It is safer to lift smaller amounts more times, than to lug a few huge shovelfuls of snow. When possible, simply push the snow.

·
Learn the heart attack warning signs and listen to your body, but remember this:
Even if you’re not sure it’s a heart attack, have it checked out (tell a doctor about your symptoms). Minutes matter! Fast action can save lives — maybe your own. Don’t wait more than five minutes to call 9-1-1

·
Don’t drink alcoholic beverages before or immediately after shoveling.
Alcohol may increase a person’s sensation of warmth and may cause them to underestimate the extra strain their body is under in the cold.

·
Consult a doctor.
If you have a medical condition, don’t exercise on a regular basis or are middle aged or older, meet with your doctor prior to the first anticipated snowfall.

·
Be aware of the dangers of hypothermia.
Heart failure causes most deaths in hypothermia. To prevent hypothermia, dress in layers of warm clothing, which traps air between layers forming a protective insulation. Wear a hat because much of your body’s heat can be lost through your head.

Some heart attacks are sudden and intense — the “movie heart attack,” where no one doubts what’s happening. But most heart attacks start slowly, with mild pain or discomfort. Often people affected aren’t sure what’s wrong and wait too long before getting help. Here are signs that can mean a heart attack is happening:
<

·
Chest discomfort.
Most heart attacks involve discomfort in the center of the chest that lasts more than a few minutes, or that goes away and comes back. It can feel like uncomfortable pressure, squeezing, fullness or pain.

·
Discomfort in other areas of the upper body.
Symptoms can include pain or discomfort in one or both arms, the back, neck, jaw or stomach.

·
Shortness of breath
with or without chest discomfort.

·
Other signs
may include breaking out in a cold sweat, nausea or lightheadedness

As with men, women’s most common heart attack symptom is chest pain or discomfort. But women are somewhat more likely than men to experience some of the other common symptoms, particularly shortness of breath, nausea/vomiting, and back or jaw pain.

Calling 9-1-1
is almost always the fastest way to get lifesaving treatment. Emergency medical services (EMS) staff can begin treatment when they arrive — up to an hour sooner than if someone gets to the hospital by car. EMS staff is also trained to revive someone whose heart has stopped. Patients with chest pain who arrive by ambulance usually receive faster treatment at the hospital, too. It is best to call EMS for rapid transport to the emergency room. If you can’t access EMS, have someone drive you to the hospital right away. If you’re the one having symptoms, don’t drive yourself, unless you have absolutely no other option.

Perfect day to curl up with a good ... psychiatrist

TBT ... Hey, check out this way-recent throwback ... mainly to see the warmth and summernesss ... http://www.youtube.com/watch?v=exhb5T0-rqc&feature=youtu.be


Along with Rte. 539 now shut down due to overturned truck (and downed pole???) there is a nasty barn fire in Whiting (or thereabouts.) Interesting warning among responders to that barn fire, “Watch out for all the animals running around” Sure hope all that livestock remains “live.” Once again, our first responders easily match the mail deliverers motto: Neither snow nor rain nor heat nor gloom of night …


I'm passing this APP release on since I've now gotten 9 calls/emails asking if the animals are OK in the Whiting barn fire ...

A barn full of animals went up in flames late Monday morning, Manchester Township Police Capt. Todd Malland said. They managed to get out, but some are still at large in the area.

Crews from the American Society for the Prevention of Cruelty to Animals were called to the scene of the fire to try to corral them, Malland said.

Getting stranded on a desert island is one thing — but imagine getting stuck on an island covered with extreme ice. That's been one woman's nightmare for the entire month of February.


Lobster scientist Diane Cowan has been marooned on Maine's Friendship Long Island, just off the state's southern coast, and got so desperate for groceries that she had two boxes of food and fresh supplies air-dropped to her, NBC affiliate WCSH in Portland reported. "I've been iced in for 32 days. The longest I've been trapped on the island before was two weeks," Cowan, who lives on the island studying lobsters, told the station this week.


This winter has been so brutal that the surrounding waters have become choked with ice and the island's docks remain frozen, with temperatures plummeting to minus-17 degrees — too treacherous for ships. But Cowan, 54, has a phone and Internet access, which allowed her to ask her friends on the mainland for some help. They gathered together supplies, including fresh fruits, meat, dog treats and much-needed coffee, and had the care packages dropped to her from a small plane. The first box landed on the roof of a building, but the second made it to the ground.


Cowan said she was "absolutely thrilled" when she found the boxes. "I also like the idea this could be done," she added. 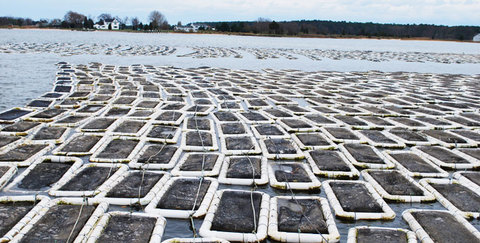 The harsh winter hasn't only hit motorists hard — it's also done a number on aquaculturists, especially on hard-hit Tangier Island in the Chesapeake Bay.

The Chesapeake Bay Foundation (CBF) says about 175 of the floating cages watermen use to grow market oysters went missing. The group is asking fishermen, boaters and coastal residents to keep an eye out for them.

Some cages have already washed ashore as far away as Cape Henry and the Back Bay National Wildlife Refuge, both in Virginia Beach, Epes said. About 70 were found as of Tuesday, with Marine Police from the Virginia Marine Resources Commission (VMRC) and the U.S. Coast Guard also were pulling cages from the water.

Missing cages represent a "significant loss" for commercial watermen on Tangier, Epes said. Their island was also iced in by the recent stretch of Arctic freezes, keeping oystermen from work for days at a time. As a result, VMRC extended the oyster season on public grounds by nearly two weeks, to March 13.

Oyster aquaculture is a growing industry in Virginia, and now accounts for about two-thirds of the state's annual oyster harvest. In 2014, the commercial harvest totaled 504,000 bushels. 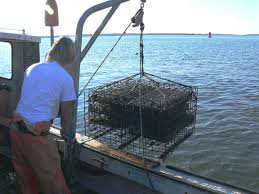