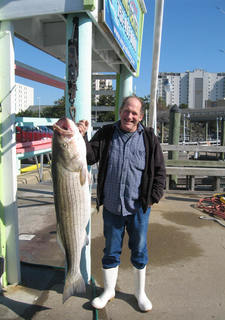 It’s one of those technical fishing weeks so this column has to buckle down and walk the straight narrow. That said, did you hear the one about the one-eyed angler and the French octopus?

Actually, me either. So I’ll move on to the still platter-eyed Chesapeake angler and his 73-pound striper, taken last week in Virginia.

That massive cow, as close to the world record as anyone has come in many moons, was fought and landed by Fred Barnes, 63, during a troll aboard Country Girl, piloted by Captain Pat Foster. Two deckhands were also aboard.

Chasing birdplay off Cape Henry (Virginia), Foster had turned his troll up a notch, to about 5 knots, trailing a red and white Stretch 30 (possibly a Mann’s?) plug. The added speed likely drove the plug deeper -- and into the realm of the mega-mouths that keep a lower-down profile. To that point, at a slower troll, they had only been taking small fish, though quite a few of them.

The fish was a modest 52 inches long but busting out with a girth of 31 inches. That length would make the fish roughly 18 years old. Hopefully a scale or otoliths dating will be done on the fish (see “Scale …” below).

That 52-inch length has already offered some fodder for the perpetually prowling prissies who hate when anyone other than themselves or their buddies catch a fish that big. Seems the charts say the top-end weight of a fish that length is maybe 68 pounds. However, it must be noted that the most popular charts used to guesstimate bass weights (based on length) are derived from decades of data from New England fish. The forage potential in waters surrounding the Delmarva is through the ceiling. It is not dissimilar to largemouth bass that gain huge girth in southern climes when equal-length fish are significantly thinner up north. My guess is Barnes’ bass is utterly legit all the weigh – make that way. Plus, Captain Foster got the fish back to the scales very quickly – with the two deckmates as witnesses.

For me, I’m only the tiniest bit put-off by the fact the fabulous fish was taken on a troll – a troll that was actually headed somewhere other than where the fish way caught. Yes, even I occasionally fling some of that famed jealousy-laced post-catch critiquing. The thing is I don’t take myself seriously..

To Barnes credit, he is also in the books for landing a 58-13 in 2005 while surf fishing the Eastern Shore (Virginia). That sure makes him a dues-paying all-around fisherman by my thinking. I will go slightly prissy again over his quote about the fish. He told a reporter, "Then this guy decided to get hungry right about lunchtime." There’s obviously not a chance in the world that his cow bass was a guy. Still, that “guy” thing easily falls among those free-wheeling expressions used by even some of the best anglers in the world, for instance, participants in the multimillion dollar largemouth bass circuit often refer to a huge bass as Bubba, despite the biggest bucketmouths being Bubbinas.

Sidenote: New Englanders have long been put out by a 78-8 Jersey striper holding the world record. The up-there thinking is one of their famed NE cows should hold that girthy honor. And for many years that section of coastline had the greatest number of 60- and 70-pound-plus bass. However, it sure seems the bass bigness has gone yonder, to the Delmarva – even to the point of bypassing NJ this year. If Al McReynold’s world-record striper gets beaten, it’ll most likely come via a fish taken in the same waters Barnes’ bass just came from.

The hugely significant hypothetical question should also be asked: Was Barnes’ 73-pound Virginia bass plying the waters off New England last summer, possibly cruising by our beachfront during its travels?

Years back, everything would point, with assuredness, to a fish like that being part of the annual bass migration northward. That migratory trend was based on a slew of scientific studies – and a goodly amount of anecdotal data. However, there are now some glitches within that tried-and-tested scenario. There’s no debate that bass annually depart the nearshore waters of the Delmarva, as currents and a brutal summer sun heat the shallows far beyond a striper’s comfort range. However, might there be a summer retreat in the deep and cool water out a way, maybe even off Delaware Bay, that deters them from going the many extra miles to New England? If you stop to think about it, that would give the fish a chance to lazily fatten up while not needing to burn a load of fat traveling.

Up here, I know the knee-jerk blame-game reaction is to say the rednecks are nabbing all the fish before they can head north. However, if the southerners catch “all the big bass” how are they, themselves, getting even more big bass every winter? It tells me the trophy stripers may not even be reaching New England – or even the mid-Atlantic waters.

Enough thinking. And some sincere congrats to Fred Barnes.

BACK TO THE POT BILL: The entire Save the Reefs/Pot Bill rigmarole is firing up again. Fully expected. Nothing has changed for anglers wanting to rid the artificial reefs of fish pots and traps.

Heartily heartened by the fact the state senate, at the end of the last 2007 session, was unanimously in favor of stopping any commercial fishing on the reefs, anglers groups are now eying (sometimes with bad intent) the state assembly.

As you recall, the full assembly never got to vote on the issue due to its failing to reach the floor by session’s end, never being posted by Assembly Speaker Joe Roberts, Jr. (D-Bellmawr, Camden County).

Angered over that seeming slight, there were some serious stares being thrown at certain assemblypersons, based on reports that many were siding with the commercialites and purposely keeping the reef bill from a full assembly vote.

I was one of the few writers to offer at least the possibility that other issues took precedent over the reef issue. Sure, I sensed some sneaky politics in the failed effort to get the bill voted on by session’s ended, but I still stand by my conviction that it is better to minimize the finger-pointing, knowing we will need loads of assembly support his year. Sometimes, badmouthing certain legislators gets all their panties in a bunch, to the point some will even vote against bills they might have otherwise supported.

I always liked the African saying, “Don’t insult the crocodile until you’ve crossed the river.”

The river between the reef bill and passage isn’t that wide. It really seems like the bill has the support get through the house and to the governor’s desk. And time is on our side. Public supporters of the bill have the opportunity to address nonsupportive assemblypersons, letting them know what awaits them politically should they oppose the bill. No, that is not the same as badmouthing them. In fact, that sort of constituency pressure is the way the system is supposed to be run.

SCALE TALE: The Barnes Bass (above) draws me back into the realm of fish scale reading, a subject I loosed last week.

As for scale basics, it is fairly easy to tell the age of a striper based on scale rings.

The look of fish scale rings is sometimes likened to tree rings but I’m not ready to run with that similarity. A few years back, I got into taking bore samples from old trees, determining age through the very obvious growth rings. That was easy stuff. Fish scale rings are a tad more tenuous to read.

A scale is comprised of a load of growth circles, called circuli. In spring, summer and early fall, i.e. heavy eating times for the fish, these circles grow in at a pretty good clip with wide spacing between each circulus. In late fall and winter, the spacing between individual circulus decrease. The tighter off-season circuli leave a dark band on the scale, called an annulus. As the name implies, this is your telltale annual ring.

While scale rings have traditionally been used to age stripers, scientists are becoming less enamored with this technique, mainly because of the nutritional angle of the circuli growth. While a slowed metabolism, and the accompanying tightened circuli, is most often due to seasonal changes in eating, other factors like stress, sickness, pollution, parasites and even a decline in forage can also shrink the spacing between circuli. This is apparent down in the Chesapeake where mycrobacterial infection, likely caused by a lack of forage, has made scale reading a tough go.

Still, our local bass are bounding and bountiful. You can feel pretty confident that the obvious annuli on a scale will tell you just how many years that bass has lived.

But that is not the most accurate way to age a big bass, or most any fish, for that matter.

The surest way to age a bass is to run over and yank out its otoliths,. All fish have three otoliths, called the Nina, the Pinta and ... No, wait a minute. Stay focused, Jay. The three otoliths are called the sagitta (largest), the lapilli (slightly smaller) and the often-tiny asteriscus.

In simplest terms, fish otoliths are found in the inner ears of most fish, sorta behind the eyes. They are made up of layers of calcium carbonate that envelops a gelatinous matrix. These calcareous concretions play an essential role in a fish’s hearing and balance. They’re also sorta fun to collect if a fish is already dead and gone. I’ve often nabbed the ear stones from larger bass carcasses I come across. When cleaned up they are white and pretty hard.

On average, the slower or more sedentary a fish species, the larger the otoliths. Reef fish or those living around bottom structure (including our tog), have the largest otoliths. Fast-movers and distance swimmers like tuna and such, have proportionately smaller ear stones, though the overall mass of a tuna can mean some hefty otoliths are on board.

Like fish scales, these ear stones show growth rings: opaque rings in summer and transparent rings in winter. When cleaned up, otoliths can be aged by immersing them in a clear glass container of water, placed on black cloth.

To make things a bit more difficult, the otoliths have to be arranged with the distal surface facing up. That’s the surface with the far clearer view of the rings. The other side is the proximal surface, which has a deep groove (sulcus) that fouls up the look of the annuli.

There are also methods like break-and-bake that involved cooking and cutting otoliths to better read the rings via a cross-section. I’ve done it and it’s not nearly as much fun as it sounds.

The coming striper season should offer a good chance to age our bass, especially the cows. In fact, maybe as part of the spring Simply Bassing tourney we’ll require length, girth, weight and age of fish entered. Maybe not.