Saturday, January 03, 2015: For my vacation, I got about as much rest as a Holgate snowy owl. Speaking of which, talk about popularity on the wing. Those south end owls remain an insane draw. Ther…

Saturday, January 03, 2015: For my vacation, I got about as much rest as a Holgate snowy owl. Speaking of which, talk about popularity on the wing. Those south end owls remain an insane draw. There have been caravans of folks going down to “See the owl.”

Once the arriving lookers reach owl territory, it’s a mutual trading of gawks -- gawk at and gawk back.

One would like to hope the owls find at least something remotely exotic about the human creatures that come to so openly stare -- and point their in-tow contraptions at them.

And the owls don’t miss a thing. You have to remember that an owl, at even 25 yards away, can easily see the tiny writing on the lenses of the cameras being pointed at them. They can literally see that donut dust on the edge of a birder's mouth. That’s why it’s always a bit of a chuckle to see some birders trying  to ninja up on a perched snowl, as if maybe they and their cameras have become invisibly immersed with the Holgate sands – while actually being the epitome of an 800-pound gorilla in the room.

As for me, when nobody is around, the owls and I have a chance to share some personal time. That's when I attempt to bond by singing  songs, quite out loud. The snowls, obviously tone deaf, noticeably calm down and seemingly appreciate my serenades. When I’m offering slow songs, one or two of snowls have been known to hold glowing cigarette lighters in the air, rocking gently back and forth. They really like alternative music ballads, like Enya. When I’m feelin’ headbangish, I’ll blare out a little Black Sabbath. That’s when the one snowy owl with a lot of black spots and beak piercings will hold up one of its feet, making the sign of "devil’s horns" with its claws, while rapidly banging its head up and down. It even looses the seldom heard owl call of “Oz-zy! Oz-zy! Oz-zy!” Turns out its black marking are actually tattoos. Rock on, owl dude!

Hey, you’re not there so you just don’t see this. It’s also the type stuff you just don't see on The National Geographic Channel.

As to the current snowy owl situation in Holgate, resident-owl Whitey is now coming and going. This truly gorgeous near pure white model recently got a bit displaced from its favorite 13,000-foot area by a newly-arrived speckled male. That speckled male has gotten way too much ink of late. The photos of it are flooding social media. Oh, it’s a decentish looking snowl but it can’t hold a candle to Whitey. What’s more, it often has a dirty face. I kid you not. Here, see for yourself on this video taken last night.

In further bird news, a family of four bald eagles, two adults and two juvies, has been making a.m. stops at Holgate, likely just cruising around looking for something to sink their talons into. The same baldy family unit have also been regularly seen near Little Beach to the south, over on the Sheepsheads west of Holgate and even at the end of Seven Bridges Road (near Rutgers Field Station/Old Coast Guard building.) This familial formation shows there is protracted post-fledging bonding between nested eagles and offspring. It would be interesting to see just how much love there is in the air when one of them makes a small kill, like a single duck. A seemingly downed peregrine falcon was seen in the Holgate shrubbery area. It had blood on it but was still alive, per the spotter, Jim V. It might have been wounded; possibly taking some shot from hunters. Or, it might have conceivably just ingested a major meal/kill and was temporarily grounded via gluttony. I got word of a couple small bass going for jigs in the LBI surf. I believe those were caught since New Year’s Day. It’s kind of a cool thing to get a post-New Year’s Day bass.  However, future bassing will be hurt by some of the coldest air of the winter, moving in this coming week -- though, first we’ll see near record-breaking high temps, tomorrow. So far/so good on my prediction of a pendulum-swing winter, from mild to cold, then back again.

Caught striper number one and two of 2015 today. I think casting for Roosterfish in 85 degree Cabo San Lucas weather would be more fun though. NJ might have lost its hold on the World’s Largest Tautog record – big time. Ken Westerfield of Queens, NYC, was taking his annual tog trip to Maryland and bested an insane 29-pound, 35-inch tog, while aboard Capt. Kain Bounds’ Fish Bound, working a spot in, and I quote, “The Atlantic Ocean. ” The massive blackfish, four pounds larger than current record holder Anthony Monica’s NJ-caught 25-pounder, is now being certified. By all indications it was a fine and fully legal catch. The fish could have been 50 years old. I’d love to have the tog's head (skeleton). I’ve reached out to Capt. Bounds.

Just got some pics of my days of prospecting for amber -- first two shots below. Thanks to Keith L for passing these on. The look and feel of our amber digs is identical to that captured on the The Weather Channel program "Prospectors" (incredible show) but our digging takes place right here in NJ. 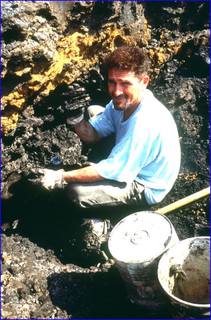 Below: keith Luzzi with fine finds of amber ... Serious digging before even reaching the amber ... 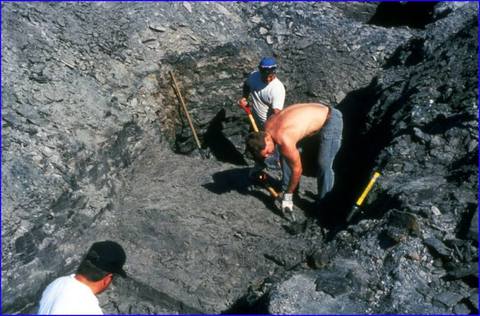