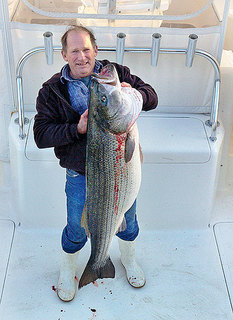 Here's a story emailed me. Since this is a not-for-profit blog I hope I can offer it up as-is. if not, someone from the "Virginia Pilot" please call me and I'll remove the story, post-haste.

Fred Barnes had caught some pretty big striped bass in his lifetime.

But nothing had prepared him for Wednesday.

Barnes, 63, a Chesapeake telephone contractor, shattered the state rockfish record with a 73-pound giant caught near the 4A Buoy off Cape Henry.

The previous record was a 68-pound, 1-ounce fish caught in 2006 by Clay Armstrong.

Barnes' fish is one of a handful of documented rod-and-reel-caught stripers topping 70 pounds. The fish missed the International Game Fish Association all-tackle world record - a 78-8 striper caught off a New Jersey beach in 1982 by Albert McReynolds - by 5-1/2 pounds.

It hadn't been a banner day before Barnes' hook-up.

"Nope, it had been kind of slow, actually," he said. "We had three or four in the box, but they hadn't been anything special.

"Then this guy decided to get hungry right about lunchtime."

Barnes was fishing with Capt. Pat Foster aboard the Country Girl out of the Virginia Beach Fishing Center.

The huge striper hit a red and white Stretch 30 trolling lure. The fish was fought on a Penn 30 level-wind reel spooled with 50-pound test line.

"We were actually doing about 5 knots trying to get to some birds when it hit," Foster said. "We troll a lot slower than that when we're striper fishing. So it's pretty wild that this fish hit.

"This thing by far tops anything caught on my boat before. I'm ecstatic."

Once hooked up, Barnes said the fight took him about 10 minutes.

"We kept fishing for a little while longer," Barnes said. "But we kept looking at it and decided to come on into the docks.

"I thought it was going to weigh somewhere in the 60s, but I never dreamed it would be more than 70."

Barnes' previous biggest rockfish was a 58-13 caught in 2005 from the Eastern Shore surf. Wednesday's pending state-record fish measured 52 inches long and had a girth of 31 inches.

Barnes said Wednesday afternoon that he had no plans to have the fish mounted.

Virginia Saltwater Fishing Tournament director Lewis Gillingham, who registered the fish at the Virginia Beach Fishing Center, had been saying for months that he expected the existing state record to be broken.

"To the point that we set a new record is not surprising," Gillingham said. "Striped bass are a highly sought-after fish this time of year, and the numbers of big fish off the coast have been incredible. But to break it by 5 pounds is pretty impressive."