Thursday, October 02, 2014: It’s kind of a misty, pissy day out. But I say that in all due respect, lest it get totally pissed off and turn nasty. In fact, the scheduled nor’easter never got goin’. …

Thursday, October 02, 2014: It’s kind of a misty, pissy day out. But I say that in all due respect, lest it get totally pissed off and turn nasty. In fact, the scheduled nor’easter never got goin’.

Somewhat weirdly, we’re seeing unusual NNW winds. Only weather and sailing buffs would overtly detect that unusual tilt to the winds but it plays out nicely in reducing the wave sizes and beach erosions of a northeast wind. It also makes today fairly decent for surfcasting. While the misty wind will quickly have a caster’s hair looking like a wet spider web, the ocean water is clean and I’ll bet anything there are bass out and about. I know for a fact there are now bass in Barnegat Bay. It might be well worth a “bridge” jigging venture tonight.

BEACH PUMP ADVANCES: You’ll read in this week’s SandPaper that Long Beach Township is ready to roll, legally, with the big Island-long beach fix, set to begin pumping sand this winter. LBT is far-and-away the largest player on the pumping block. Apparently, the legal ducks are pretty much in a row for most of Island municipalities set to have beaches replenished. 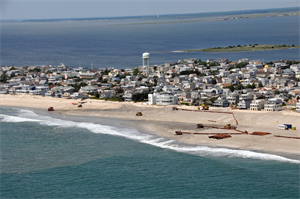 Eminent domain will also come into play. There are still some oceanfront folks fighting to keep their ocean views, fully forsaking protective efforts for the rest of us living here.

By the by, many of the holdouts are summer residents so it’s easy to see why they’d so arrogant. But that war of words is getting tired, if not totally moot. Of course, should any of the gripers succeed in holding up the works, they will quickly find themselves on a very short LBI hate-list, one that will make future LBI  summer stays – or even that of their renters – very tedious, indeed.

The contract for the work is going out soon – if not already. That does NOT mean the state DEP – the lead agency – is ready. It only means the Army Corps cannot wait any longer to get things rolling. Could the entire project fall through because the state fails to do its part? Worst things have happened at sea. That means it’s highly unlikely but memories of Sandy are actually fading fast. What’s more, a stint of storm kindness actually has many Island beaches looking quite firm. The last time I’ve seen Ship Bottom’s beaches so large was the many decades ago. Much of the overall LBI beach wideness is thanks to the four competed replenishment projects: Surf City (2), Harvey Cedars (1), Brant Beach (1). I’ve gone as far as suggesting you could likely replenish the entire Island (except the far Holgate end) by steadily replenishing just a few strategically located beaches, allowing north to south littoral drift do the spreading out duties. Take a look at this video, as the fall mullet run – from the entire East Coast – reaches Florida. This look is just a sampling. It show how few mullet we get with cast nets. However, the mullet face insanetl hard time at the hands of Floridians. Below is the state regs

Here's my favorote LBI mullet vid of all time. I capture a fluke going airborne after a mullet:

Down below is a look at Florida's mullet regulations. The regs are strict, both recreationally and commercially, however, I was told by lifelong Floridians that the illegal harvesting of mullet can get out of control -- as recently as last fall. Part of the problem stems from Asian demands for roe, which vascilates to the point a pound of roe can drop as low as forty cents a pound to ten times that. When the market is ripe for ripe roe, the poaching goes wild to the point, I think, is capable of impacting our fall run of finger mullet.

Here the state itself warns:

During the 2011–2012 mullet run, the FWC received numerous complaints regarding large amounts of roe mullet being discarded into the water dead and violations involving the improper storage, cooling and transportation of fish by harvesters. FWC Officers will be conducting proactive random quality control inspections throughout the mullet run season to ensure compliance with fisheries regulations and seafood quality control. For more information on this notice, please view the Notice to Commercial Fishermen.

Mullet significance: As I often note, our fall finger mullet arrive in spring as larvae that had been riding northward in the Gulf Stream and are then blown westward -- to our bay waters -- by spring storms. We've had some real bad fall runs of late mullet in recent years yet the spring storms (well documented) have been very prevalent, and similar to decades past. The first thing that jumps to my mind is the most rational: the source of the eggs/larvae is diminished. I fully realize there are a slew of other factors that might come into play but it's pretty obvious that any lack of egg-producing adults has to be majorly significant.

Should we look at baywater quality, which hasn’t been the greatest. Yes and no. The "yes" part is the need to always fear the worst when bays turn sour. However, mullet are among the bulldogs of survival; up there with many crabs and minnows. Oh, they'll suffer eventually from bad waters but I'll bring in the "no" part by noting this year's mullet have been jumbo in size. That is NOT a sign of bad bay times. Just the opposite. We also had a lot of cleansing flushes from spring and summer storms. Adding to that, we had cooler air and bay water temps. Hot summers can incite the worst bad-water times.

Might the Gulf Stream have been jarred by a cold winter or even oceanic warming? Absolutely, but many other species that run the same Gulf Stream course seem to have done decently. Again, that pares it down a bit -- and closer to an emphasis on a lack of healthy egg source.

How important are mullet to our bay and ocean realm. So-so -- at most. As anglers, we enjoy the fall mullet run for bait reasons but as to mullet being a vital forage phase for our gamefish, it just ain't so. They complement the vital fall menu of blues, bass, fluke, stripers and weakies but stomach contents show mullet aren't even in the vitalness ballpark with the likes of spearing, rainfish and bunker. Nonetheless, an ecosystem always has to be looked at holistically and the diminution of any part, i.e. mullet, is not a good sign.

Mullet are found throughout the state in coastal rivers, tidal creeks, bays, estuaries and along sandy beaches. Because they feed primarily on algae, detritus and other tiny marine invertebrates, catching mullet by hook and line requires a tiny hook and a great deal of patience. For this reason, mullet are primarily harvested by cast nets and haul seines. Mullet swim in large schools and are frequent jumpers, so it’s often easy to identify their locations by simply watching for jumping fish. Mullet also have excellent vision and plenty of speed to avoid a cast net, making them difficult to catch in clear water. Mullet are a primary prey for many predatory species. Their food value ranges from moderate to excellent depending on their location of harvest and personal preference. Mullet have a very high oil content so they are excellent for smoking.

This species is not currently eligible for a state record.  Most common size is 1 to 3 pounds but can exceed 10 pounds.

Mahi fishing was great, weed was awful so couldn't troll so we had some fun...
http://www.youtube.com/watch?v=uHvNUKaGr6k&list=UUSeDrvat5etVTi...

We start catch fluke when the season ends..

“This bill is a step in the right direction – it reduces the torrent of plastic polluting our beaches, parks and even the vast ocean itself,” said Governor Brown. “We’re the first to ban these bags, and we won’t be the last.”

Effective July 1, 2015, the new law prohibits single-use plastic bags at grocery stores and large pharmacies. The law requires retailers to provide paper or reusable bags constructed of at least 40% recycle content and charge a minimum 10-cent fee. The ban will extend to smaller convenience stores, foodmarts and liquor stores after July 1, 2016. Further, companies that currently manufacture plastic bags could be eligible for loans to “retool” their factories so that they can make reusable bags and respond to new market demands.  The law does not preempt current bag bans that are already in place or in the works.  But this statewide ban applies to the remaining 65% of the state that is already covered with a local bag ban.

Congratulations to all of the Surfrider Chapters, members, and clean water advocates who supported this effort over the past six years!  Your hard work and perseverance has finally paid off!

It is estimated that somewhere between 500 billion and 1 trillion plastic bags are used yearly worldwide. Nearly 20 billion plastic bags are used annually in California and most end up in landfills or as litter. After plastics enter the marine environment they slowly photodegrade into smaller pieces that marine life can mistake for food, sometimes with fatal results. The overriding problem with plastic bags, plastic bottles and other plastic materials is that they can take decades or centuries to degrade. Essentially, they're with us in the environment forever.

This October, Surfrider is launching its fourth annual Rise Above Plastics Month. During this month long campaign, the organization is calling on the public to learn the facts, pledge to reduce their plastic footprint, join a beach cleanup, help raise funds and enter Surfrider’s Plastic Art Contest. Learn more at rapmonth.org.

Change begins onshore. It begins with you. Join the Surfrider Foundation in protecting the coast and Rise Above Plastics. 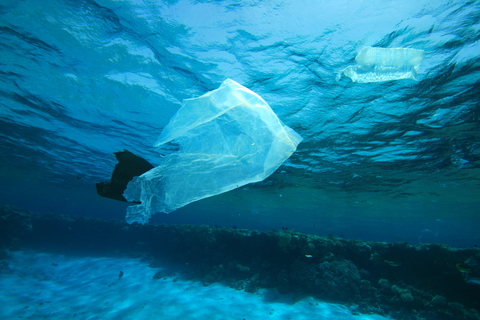