Saturday, September 13, 2014: I hope you didn’t have any big fishing plans for today. A complex weather mess to our south – where they’re getting deluged – is drawing in Saturday-ruining NE’erlies, t…

Saturday, September 13, 2014: I hope you didn’t have any big fishing plans for today. A complex weather mess to our south – where they’re getting deluged – is drawing in Saturday-ruining NE’erlies, to 20 mph early. .

This is purely a one-day system, and possibly a return/start of the one-day-and-done blows that have become the winter norm for almost the past 10 years.

Naturally, it’s way too early to make a precise call on how storm will manifest this winter, though it’s a huge benefit to have storm systems zipping through. Weather history as shown it’s the dawdling blows that get all drunked up on staying power and destroy.

The downside to fast-moving systems is they’re often being sped along by powerful Canadian-polar air masses, now dubbed polar vortexes.

Hopefully all ya’ll will hang in here all winter and get the lo-down on how thing really play out here on LBI.

No matter what happens this winter, I’ve already put up so many forecasts possibilities/variation, I’ll surely be able to say, “See, I told you so.”

The one direction I simply can’t go is anything resembling a record warm winter, as was the big prognostication when global warming was at first misread, over a decade back.

Speaking of which, I was one of the first to suggest that warming oceans – and that is surely happening -- could cause North American weather systems to accelerate (one-and-done storms) due to the uplifting effect of warmer seas, literally sucking weather along via enhanced ocean/air currents. I wasn’t nominated for a Nobel Prize but I had a couple decently-lettered scientist agree that the speeding up of weather systems is highly likely with a warming planet. Which also explains the US cold where it should be warm. Fast-moving weather system across the lower 48 movements tend to pull-down arctic air.

Hey, it all make sense – until next week.

BIG MULLET RUN: The “big” part is the size of the first migrating mullet. For those of you who know the business, a full orange bushel is barely 50 dozen. A bushel can hold well over 100 dozen “finger” mullet.

The initial push of larger mullet is common. They grew quicker, either because they were early-arriving larvae last spring (had more time to grow) or were in a more favorable growing environment. Whichever, they swim faster and stronger than smaller mullet; schooling together for that reason. Possibly cockier, they bust loose on a migratory run.  Or, simply, they quickly got ahead of the slower swimmers. Whichever, the large mullet make for tough going for folks who live and breathe mullet rigs (I don’t). Large mullet don’t fit on mullet rigs, despite folks jamming them into a U-shape to get them one. Absurd looking. Sure, bluefish attack them. They’ll attack anything, even the absurd. The hook rate sucks.

The trick with big mullet is to chunk them and put them on pompano rigs. It’s not best to go with bluefish rigs at first since most the early blues are smaller. Pompano rigs have just the right look (I like those glowy orange/red floats) and super hooking ability for cocktail/tailor blues. But to me the finest way to use really large mullet are scaling them, then fileting with a sharp (even serrated) paring knife. Larger filet knives can be very hazardous when dealing with micro-filetings. Those oily, meaty mullet filet strips make super fluke, bluefish and weakfish offerings. 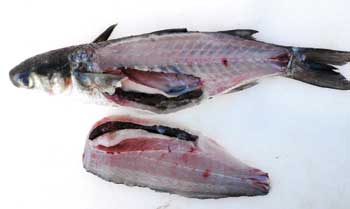 By the by, there is absolutely no way of telling the extent of the arriving mullet run by the first showing. I can’t count the number of years where the larger mullet came in like gangbusters but then the overall run (which can last well over a month) died on a dime. That can especially happen when a big storm (possibly tropical) hits at the onset of the migration. The blow literally flushes all the mullet into the ocean, where they can use northeast currents to bolt southward and outta town. Not only do they use the storm as cover but they move off the beach and out of netting range. Similarly, I’ve seen a single early-run storm get the mullet moving out past the sandbars to where they won’t come into netting range for the reminder of the run.  Many a surfing year, I’d sit out there waveriding and see a veritable parade of mullet V-ing by me. And so I’d rush in to net and couldn’t find one stinkin’ mullet in close. Of course, a sudden showing bluefish can adjust their beyond-the-sandbar attitude real fast.

Where do mullet end up? Florida ... 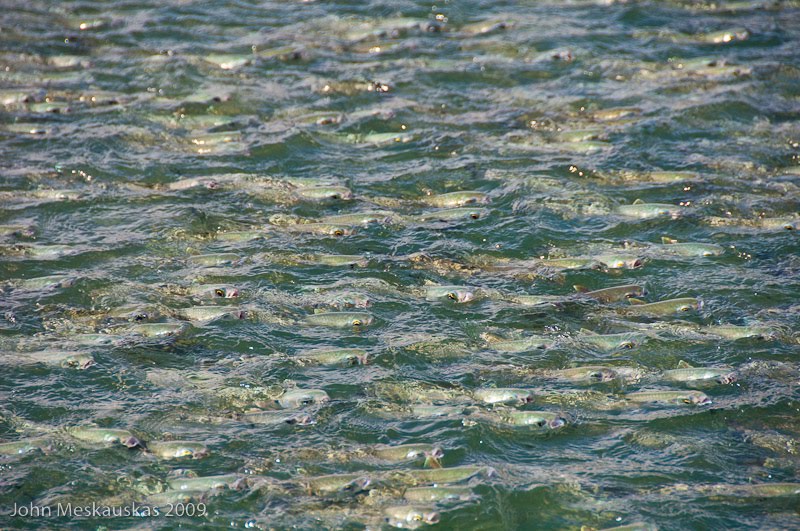 By the by, the “fresh: mullet you’ll now see in the shops are just that: highly fresh. Keep them cool and they can be kept in the fridge for damn near five days. Do not freeze mullet that have been fridged for over five days. Bury them in the garden.

Mullet time is one of the only times I bait fish. When fishing them whole, it really helps to scale them, releasing the skin oils. Also, after scaling, bend them back and forth one good. That busts the rigor mortis and gives them a nice rubbery action when fishing fluke, weaks, bass and blues.

Here's a fun flashback to wild mullet times in Holgate -- including one of the only looks at a fluke going airborne after mullet ... : http://www.youtube.com/watch?v=pnWvnPVBfmw

POP IT UP!: Far more exciting to me is the way the mullet run means it’s time to go popping. Be it a standard Polaris Atoms or a top-shelf custom-made popper (I use T.W.s) nothing is finer than a watching a water-surface blast upon an artificial during the mullet run -- when fish go balls out knowing they have to clobber a mullet to have a chance at it. Which leads to one of those popping tips that many a plugger forgets. An initial attack of a popper can often be a mere whack, sometimes called a tail slap -- though underwater videos show it is more of a full body slam in the case of stripers. That knock is meant to disorient or disable the baitfish. It’s actually not a bite. That’s why it is often best to let a swiped popper just go dead (stunned) in the water. The attacking fish is expecting that. Count a few seconds and then offer a couple subtle “revival” pops of the plug before going back to straight-forward popping, though at a slower, less regular popping rate. The next hit will be a full-blown inhale attack. Yes, smaller fish go bananas over a insanely skipping popper. Catch all of those juvies you want. But when it comes to trophy fish, watch how a popper strategy shows on the measuring tape.