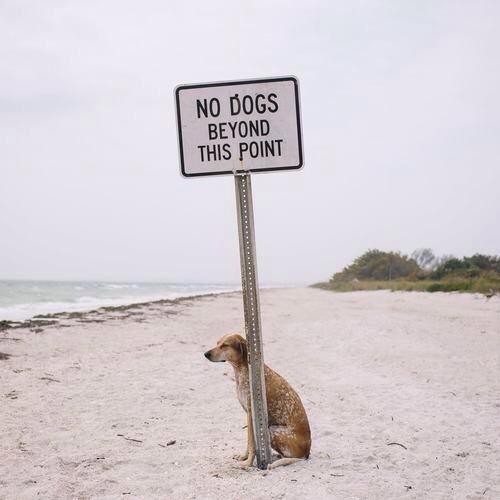 Sunday, September 14, 2014: The early-day west winds have quickly swung around to become suddenly all-too-common northeast winds, though they’re no blowing real hard and could back off later in the day.  Nonetheless, the winds are maintaining the four- to five-foot swell from yesterday’s blow. That doesn’t bode particularly well for surfcasting and even more so for boat angling.

I had a boat angler at church today say, “I knew as soon as I kept my boat in longer than usual – so I could get in some fall fishing --- all this wind would start.” So, it would seem this fellow is the singular reason we’re having all these wind hitches. And to think, he seemed just like you every day Joe. I would have never guessed him and his boat as the focus of the Jet Stream and such.

This is the type day I’m glad I’m a sworn Holgater. It is so much easier handling north winds and swells on the south tip, where the winds are at my back.

KINGFISH LOW-SHOW: I’ve gotten a slew of folks wondering about any arriving kingfish, easily among the finest tasting fish we get. 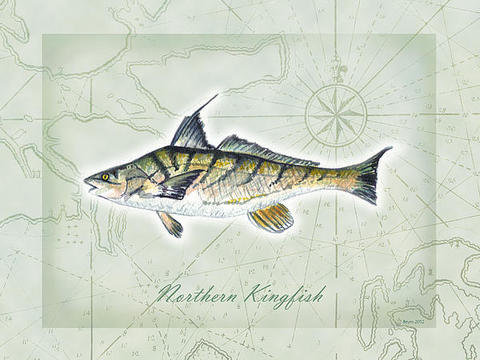 Troublingly, I haven’t seen hide nor hair of these prized panfish, both checking with other folks and also throwing in a kingfish rig with locally dug bloodworms.

This lack of incoming kingfish data could be partially due to the lack of calmer surf conditions needed to fish them properly from the beach. However, I know some seriously dedicated bayside panfishermen – kingfish, blowfish, croakers, spot – who haven’t been able to chum them up even in west Barnegat Bay, a common staging area before the kingfish move out. 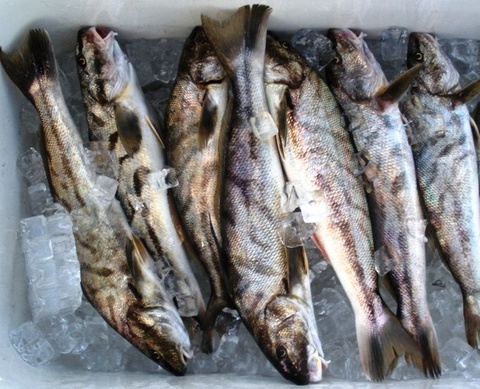 This does not mean were doomed to kingfishless. There are huge bays and rivers to our north – as far up as Nova Scotia -- that might have had a good kingfish year. Those migrating kingfish can take a lot longer to get here.

By the by, I don’t really use the nickname “kingies” for kingfish since king mackerel (below) sorta have that moniker sealed up. 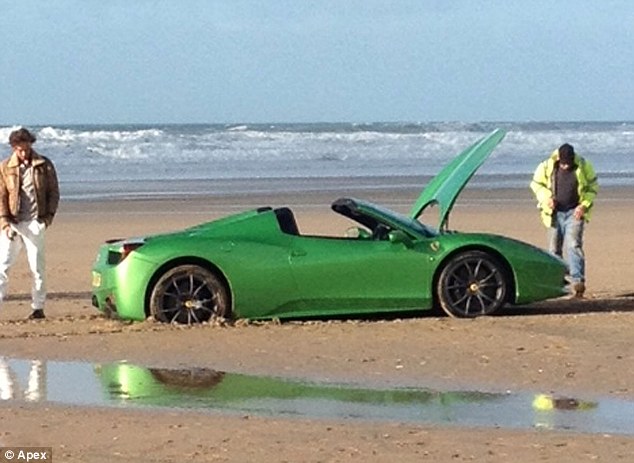 There have been an unusually high number of folks trying to drive on the beach with their AWD and 4WD vehicles. I know this by the number of police calls about stuck folks. South Shore and others have come to the rescue. All I can offer in here – since most all ya’ll are at least somewhat savvy to the ways of beach driving – is the ongoing caveat that you not only need  4WD vehicle (AWD are often unsuited for serious sand sinkage) but you truly need to know HOW to drive the beach.

(Below: Nothing is worse than the "I told you so," regardless of how she presents it.) 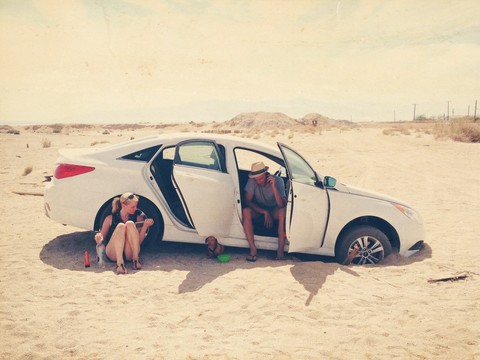 Sure, the airing down of the tires is huge, and the prime reason for virtually all the bogdowns I’ve seen in Holgate so far this season. However, there truly is a science behind reading the beach ahead, especially those with any slant at all. When four-wheeling, virtually any slope can kill any and all forward progress. Another tip off to tough times ahead are blown-over or loose-sand areas. Again, it takes an eye to pick those sink spots out. Truth be told, a lack of other tire tracks is as good a tip-off as any, thusly, you really don’t want to be blazing a beach trail if you’re new to beach driving.

That don’t-be-first warning now looms large, as the rest of LBI’s beaches open up to buggying, exception being Barnegat Light, which never opens to buggying.

THAT POINT WHERE HANDS REALLY WON'T GET IT DONE: The largest counsel I offer even the finest of beach drivers is don’t leave home without your frickin’ shovels! All of us bog down a bit, now and again. It’s experience that teaches us not to push it when a bog down starts to occur. The earlier you get out to see why progress had slowed or stopped, the greater the chance further airing down – the numero uno way to get out of less-than-deep trouble. For impatient or inexperienced buggyists, failure to quickly stop and appraise the sinking situation leads to the “burying” of a buggy.

For those unaware, “burying” does not mean the buggy goes clean out of sight. It means it has been sunk to where the chassis – especially the front skid plate – is fully resting on sand, i.e. the entire vehicle has become part of the beach. Logic alone dictates that such a buried vehicle can no longer move until the entire frame is freed using – voila! – shovels. Don’t forget ‘em. 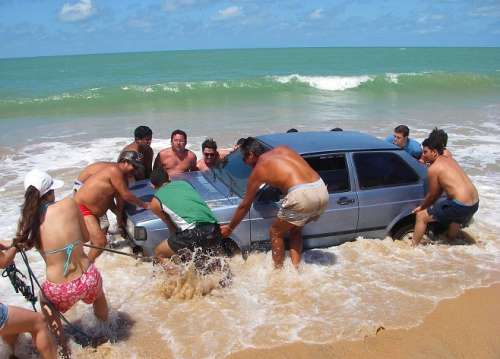 For the fully clueless: There are no “free” buggying beaches on LBI. Every town requires a for-pay permit. I had a stuck folk just last week actually say, “I figured the season was over so we didn’t need a permit.” I quite kindly said, “Uh, I’m pretty sure you’re thinking of beach badges. Now is the buggyin’ season.” That was the big black Jeep Cherokee in Holgate, which aired down and got off uncited and unscathed – unscathed by a $300-plus tow-out fee.

HOLGATE HAPPENINGS: The last storm smoothed out the beach but left it flat and easily drivable.

High tides will remain a beachfront problem for a couple more days, and then we’ll get into a low tide-impact stretch.

I want to note there is an ugly presence of cigarette butts near the back-cut. Folks, please …!

Many of the younger gulls in Holgate are still not overly wise to buggies – not that gulls are rocket scientists at any time in life. It’s hard to believe but it is often necessary to fully brake for some gulls as  they cluelessly rest up ahead -- even as we approach at the slow and legal 20 mph.

What’s the big deal with one less over-populated gull? It’s very much a PR thing. A recently-squished bird of any sort sets beachcombers off like nobody’s business. I even see their point. So, just don’t run any over.


Looks like there might be a break in the wind and weather this Mon,  Sept 15. They are forecasting a 5 to 10 knot north wind which would mean a run to Barnegat Ridge is looking very good. If Mon morning comes, and the inlet or sea condition is not as nice as forecasted, I will have a box of shrimp ordered as Plan B. I am only accepting reservations from individuals who are flexible with this plan. Keep in mind that the only one who wants to get to the Ridge more than you guys is me! That area is alive with bonita, albacore, and who knows what else after all this easterly wind! But, as those of you who have fished with me already know, I do not sail in borderline or questionable sea conditions. 6 AM to Noon. $160 per person. 3 people max. All fish are shared. I am going to bring a pail of spearing so we can troll and bait fish the bonita and albies if conditions dictate. Call to reserve a spot.


Tomorrow, (Sun) is going to be a rough ocean but the bay is fishable if anyone wants to call for a charter.

In my last report I talked about the bait and false albacore.  Well since then there have been many reports of Fat Albert’s along the beaches and inlets.  And it even gets betters.  My friend Capt. Dan Siegel was on a trip late in the week and had Alberts pushing in on the flood tide as far back as Oyster Creek Channel off Sedge Island and even into Double Creek west of the Dike!  After my first full week back in the classroom, the recent NE blow, the waning full moon, and the bait movement in the back the sea was calling my name Saturday morning.  No I am not schizophrenic. I braved the NE wind at first light and ran over to the sedges to get away from the wind and was not disappointed.  All the 1 to 3 pound blues you could ever want where destroying spearing and mullet.  Also managed a pair of short bass.  The terns, gulls and dozens of pelicans were smashing the water some times.  Not a good time for my DSLR to be broke and my GoPro battery dead.  With school is session I am running trips weekends and weekday afternoon/magic hour/into the dark trips. Just give me a call.

On the nature side of things: Friday a Whiskered Tern was found in Cape May. So what is so significant about that you may ask?  This bird breeds in parts of Europe and Asia while wintering in places like Africa and Australia.  In the historic records of bird sightings this is only the third time it has ever been spotted in North America.  The first time was in 1993 in Cape May and second time was in 1998 in Cape May. It sure does highlight the geographic uniqueness when it comes to Cape May but does it also show a shift in weather patterns………………………

Hoping you find a Fat Albert soon to scream you drags,