Thursday, July 24, 2014: I sometimes try to be cynical but it just doesn’t feel natural. Take for instance the upcoming weekend (Fri/Sun), which looks to be split right down the middle, with Friday a…

Thursday, July 24, 2014: I sometimes try to be cynical but it just doesn’t feel natural. Take for instance the upcoming weekend (Fri/Sun), which looks to be split right down the middle, with Friday and much of Saturday looking real nice, albeit a bit hot, and late Saturday and all Sunday going sorta gloomy and spitty, a bit of a repeat of last weekend. Still, I fully see the weekend as half-full -- and ready to rock. Let’s do it!

The winds could also be a half-and-half . Friday and Saturday will host light winds -- until late Saturday, when the southerlies will accelerate, even reaching a 25 mph pitch, in gusts. Still, the half-fullness side of things offers very decent angling openings tomorrow and most of the next day. No, I can’t tell you to play hooky tomorrow. I will write you a note, though. “Who is this Dr. Jay on your note, Crothers?”

The bay remains fully fluke-ified. Shorts galore -- which isn’t really a bad thing. Aggravating maybe, but not bad. The bayside seems to be the way to go.

Large baits seem to separate the short fluke from the take-homes. Bucktails/leadheads are working very well and help to add size/bulk to the bottom presentation.

This super bayside fluke showing is a bit contrary to the last few summers, when scalding hot midsummer weather drove the heat-sensitive flatties into inlets and the ocean. Cool night and subdued sunlight have kept bay waters in the 70s, just fine for larger fluke, including some 5-pounders I’ve seen on tackle shop boards.

The surf fishing has been highly aggravated by winds, waves and weed. I talked with a fellow (mid-Island) who, the previous day, had taken the largest fluke of his career, using a Hopkins, which isn’t strange at all. He only offered a hand-to-hand portrayal of the flattie’s size but I’m thinking it might have been three or four pounds. Ready for this? He released it. “My wife and I don’t eat fish.”

When fished slowly – and this fellow had a small rod and a larger lure, thus slowness -- a Hopkins can slay surfside fluke. I use a smaller, single-hook Hopkins with a nice slice of squid or GULP.

Belly content for kept bayside fluke show spearing, shrimp and crabs are high on the natural menu. However, of all our gamefish, fluke are the top regurgitators so many fat flatties will have squat in their stomachs when being cleaned.

I haven’t heard much more on the croakers, short of some being taken near Little Egg by folks fishing for fluke.

I’m not sure it’s the best way to fish for croakers but I prefer squided pompano rigs, with small floats and baitholder hooks – not curved hooks. This is a little larger setup than the very similar kingfish rigs.

Sharking has quieted down due mainly to the lack of decent night fishing condition. However, sea sand tiger hookup shown below.

Sharkers are running into massive rays, many feet across. These are likely southern stingrays (Dasyatis Americana), which can grow to over 200 pounds with an awesome 6-foot-plus wing span. 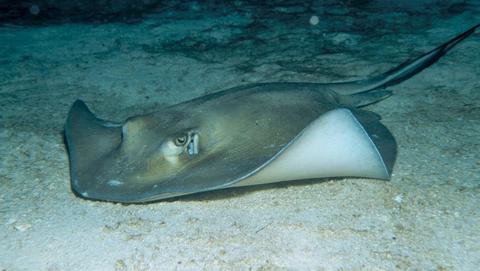 Black seabassing has been fair to middling. Still nothing near what we had years ago. 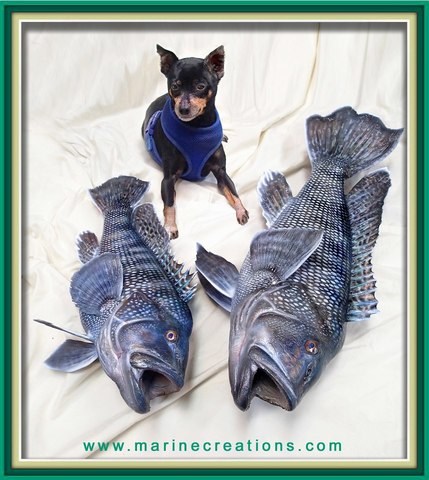 Who wants to go for a swim? Look at the teeth on this thing!

Matthew Bucelli sent me these pictures from yesterday where his buddy caught a 6' Sand Tiger shark off the Brigantine surf. I think if you look in the belly you...

Yes, this is news! And it doesn't appear to be the larger sand(y) shrimp ...

Watch a Guy Catch Bass Underwater with a Rod and Reel [VIDEO] - Wid...

If you've ever wondered what underwater fishing with a rod and reel would be like ...

This video sorta shows the thought process of a freshwater bass ...

The Navy is prepared to kill nearly 1,000 marine mammals and injure thousands of others during the next five years of routine training with sonar and explosives.

Tell The Secretary of Defense Not To Needlessly Deafen And Kill Wha...

The US Navy estimates its plan for training with sonar will kill nearly 1,000...

The giant wels (silurus glanis) was caught from the River Po in Italy recently and sets a new record for the pair at a massive 265lb, measuring 8.5ft in length.