Wednesday, June 18, 2014: It’s one of those ocean days that looks more like further south? Huh? The water is clear and blue-ish, a shade more like the Carolinas. While the water isn’t toasty (mid-…

Wednesday, June 18, 2014: It’s one of those ocean days that looks more like further south? Huh? The water is clear and blue-ish, a shade more like the Carolinas. While the water isn’t toasty (mid-60s in some places), the air is starting to sizzle a bit, inching toward 90-ness. With west winds dominating (they might come onshore later in the day), there’s not much temp relief for LBI’ers. Still, you couldn’t ask for a finer preseason surfcasting day.

As for the fish, they’re not going to be overly cooperative in the suds. There’s simply too much transparency for bass and even blues, though I’ll bet Barnegat Inlet rock-toppers find some fun blues and such, mainly on Avas or bucktails

The one species sure to be saluting in the surfline is fluke. If the past few days have been any indication, the flatties will readily come to bucktails tossed over the bars – and graced with GULP, squid or even minnies. The surf is so small that such bayside baits can be cast out a short ways. That technique can even be used from the New South Jetty, BL.

Expectedly, I’m getting reports of huge stargazers. They come with the surf fluking territory. 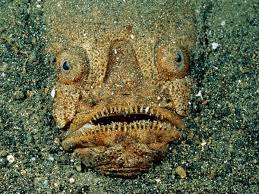 I’ve eaten these – and they have a huge chunka meat, very similar to blowfish in shape and location. However, the taste is not as good as delicious puffers.

Late today -- and mainly tonight -- will be shark central along the beachfront.

I got an email from a fellow who nabbed a “huge” sand tiger and wanted to know about keeping its jaws. Unless it can be done without killing the shark, that’s a no-go. I’m told that even if a released (protected) shark dies and washes up, you cannot perform jaw surgery. I’ve actually found a couple majorly jawed sharks washed up over the years but always resisted any parts removals, even though the fish were dead as fried chicken.  Laws be laws.

Has anyone been officially asked to show proof of saltwater registry in NJ?

Both the inshore and offshore waters surrounding Long Beach Island are offering a wealth of fishing opportunities for the boats of the Beach Haven Charter Fishing Association.

The fluke fishing in the waters of Little Egg Harbor Bay and Great Bay are producing not only good numbers of summer flounder, but a much higher percentage of fish are over four pounds than has been seen in recent years. Waters which have been producing big fluke include the Middle Grounds, the ICW, Marshelder Channel, and Great Bay waters from the old fish factory through the clam stakes.

Also providing action in the bay waters are some feisty 3-5 pound bluefish that have the knack of showing up practically anywhere. Boats have been finding them near the inlet early in the morning before the heavier boat traffic arrives.

The striped bass action in the ocean has slowed somewhat, but there is a lot of bunker around, and stripers can often be found around these pods of bait fish. Right now the best bet for the BHCFA has been trolling bunker spoons and looking for signs of fish on the machine. At times big bluefish and even thresher sharks will attack the bunker spoons.

The inshore wrecks and artificial reefs are producing some good numbers of black sea bass along with some ling, blackfish, and even some cod. Captains with their own numbers for pieces of structure have found some very nice fish.

The canyons have already come alive and recent trips offshore have resulted in catches of big eye tuna, yellowfin, and some bluefin. This is a good time to fish offshore as the weather is usually better than the fall, and there are not as many boats.

The Beach Haven Charter Fishing Association will begin its Junior Mates Program on Thursday, June 26, at the Beach Haven Maritime Museum. This summer long learning experience is open to any youngsters over the ages 13 and over who would like to have the chance to learn more about fishing. Information on this program and the BHCFA in general can be found at www.BHCFA.org 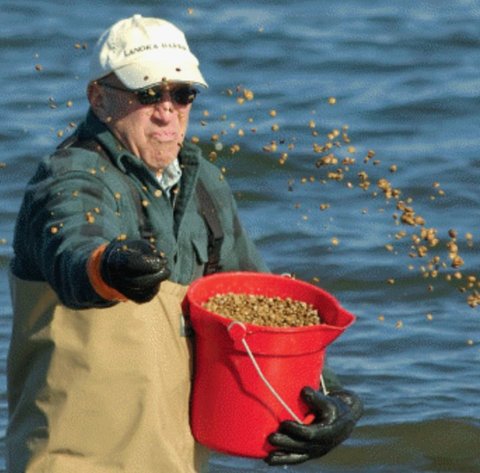 ReClam The Bay wants to let you know that on Monday, June 23rd, about one o’clock they will be doing a “remote set” of oyster larvae at Cattus Island County Park, and you are invited to see this setting of the oyster larvae on shell. This will take place near the County Park Headquarters building. To get there off Fisher Blvd., turn on to Yellow Brook Road, then go four blocks and turn left on Bandon road.

This is the time in an oyster’s life when it is only microns in size.  Millions can be held in the palm of your hand.   Oysters attach themselves at this stage to something hard, and in a tank at Cattus Island 3 million larvae will be put in the water with hundreds of shells so that they have a place to attach and spend the rest of their lives.  Many of the shells have been colored by local students, and in a few months as the oysters grow, the art work will be covered by the new oysters.

After the oysters attach to the shell, they will spend a short time in the tank to develop.  In a few weeks they will be taken out into Barnegat Bay where they will be placed on an oyster reef.  Oysters that once were plentiful in Barnegat Bay are now rare.  They are very important to the health of the bay as one adult oyster will work 24/7 filtering the water to obtain the algae they consume for food.  One adult oyster will filter about 50 gallons of water a day.

Kinda close to the leg, eh?

Too late to win tournament, 14-footer scales at least 1,130 pounds This past Saturday, Frampton Ferguson and his crew won the Edisto Shark Tournament out of Edisto Island with a massive, 482-pound tiger shark. Little did they know, a shark almost three times the size of their winner was headed to the dock – just not in time for the tournament’s deadline.

Cal Young, captain of the Cold Beer, and his crew of Johnny Sanders, Madison Utsey, and Patrick Zemp finally managed to get to the docks at Edisto Watersports and Tackle and the Thirsty Fish with a 14-foot tiger shark that weighed at least 1,130 pounds – and maybe a lot more.

Young and his crew fought the fish for nearly 2 hours, some 20 miles out of Edisto Island, over a livebottom ledge. With two hours to make it to the dock for the 5:30 p.m. weigh-in, they tried to lift the shark over the gunwales but were afraid it would swamp the 25-foot Sea Pro center console and decided they had no choice except to drag it behind the boat.

“It was slow going, and we tried several times to get her onboard, but it just wasn’t going to happen,” Young said. “We could only make about 4 knots, and that was going to be too late.”

Young and crew finally made it to the docks at 9 p.m., and tournament officials hung the huge fish from scales, but it was so long that its nose was still touching the dock with the scales registering 1,130 pounds. When the weighmasters tried to hang the fish off the dock, the rising, full-moon tide prevented it from clearing the water.

After the fish was taken down and processed, Young made an interesting discovery about the fish.

“We found a whole 100-pound loggerhead turtle inside the fish’s stomach,” he said.

Young, who guides out of Edisto Watersports, said the crew first saw the shark “come up to the surface behind our chum slick.

“We got her to eat one bait, but she popped the leader, but we were fortunate to get her to eat another bait about 1:30 in the afternoon.”

Had the shark weighed the full 1,300 pounds that several people estimated it, it would still have been short of the state and world record by almost the weight of Ferguson’s winning shark.

On June 14, 1964, Walter Maxwell landed a 1,780-pound tiger shark off the Cherry Grove Fishing Pier in Myrtle Beach. That fish stands as the state record and all-tackle world record.

Invisible Barn Brings us Back to Nature

Do you remember Parc de la Villette in Paris? The park was designed by the French architect Bernard Tschumi, who built it from 1984 to 1987. It hosts museums, concert halls, live performance stages, theaters, and children playgrounds. It’s one of the largest concentrations of cultural venues in Paris, including Europe’s largest science museum. But it is most famous for its 35 architectural follies. They are placed on a grid, forming a distinct organization within the park and acting as points of reference that help visitors navigate.

What is a folly?

In architecture, a folly is a building constructed mainly for decoration, but suggesting another purpose, or a structure so extravagant that it goes beyond the normal range of garden ornament. Follies are found worldwide and have been used since the 18th century. Mainly used in English and French gardens, follies often took the form of Roman temples, ruined gothic abbeys, or Egyptian pyramids. In Parc de la Villette, the iconic follies act as architectural representations of deconstruction. But what would a contemporary folly look like?

The Architectural League’s Folly Competition is a contest that asks architects and designers to create a 21st century folly to be installed in the Socrates Sculpture Park in New York. The call is to explore the contemporary interpretation of the architectural folly. The designers should explore the boundary between sculpture and architecture, and the overlapping concepts and techniques between the two fields.

The design practice STPMJ has come up with a cool and extraordinary conceptual project: The Invisible Barn is designed to challenge visitors’ perceptions. The structure is made from two-by-four wooden surfaces covered in Mylar. The shiny material reflects its surroundings, creating the illusion that the building has disappeared.

The Invisible Barn sits in the middle of a grove and reflects the trees and plants around it, the sky, the ground, and the seasonal changes. A few strategically placed cutouts support the illusion, creating floating windows to the surrounding landscape. The illusion is exceptional, especially when the visitor discovers that he can actually walk through the passageways like a door.

A close up of The Invisible Barn. Credit: STPMJ

Nobody would expect to not see the folly. The designers decided to hide the architectural construction and to emphasize the natural landscape around it, making it more challenging and interactive for the visitor. It steps back in order to celebrate nature.

Even though the project didn’t win the competition, this concept is an excellent example of the contemporary folly. For the sake of being cool, it wins all the points. Moreover, it implies a “coming back to nature” message that is clearly appreciated. Through the invisibility of the architectural construction, the focus is shifted from the manmade to the natural world.

A traditionally attractive small-scale building or pavilion, part of a garden or landscape to frame a view, the folly takes different shape in the modern world we live in. This notable entry plays with the ever-changing environment, as well as with the perception of the visitor between the real and the mirrored surroundings.