(Above) Just got sent this pic of a myself and a 50-pounder. It was tourney time or I wouldn't have kept it. That same year, I released 227 bass unharmed. Yes, I used to tabulate. I kinda earn… 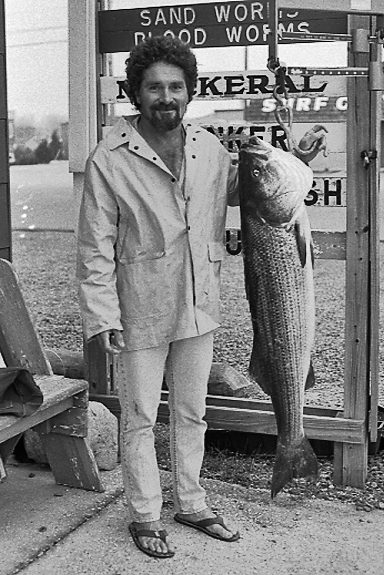 (Above) Just got sent this pic of a myself and a 50-pounder. It was tourney time or I wouldn't have kept it. That same year, I released 227 bass unharmed. Yes, I used to tabulate. I kinda earned keeping this one -- but still felt a bit bad. I think I could now keep it alive long enough to weigh it in and still release it. That's implying I can still get  fish this big. I might wanna rethink that.

5/2/2014: Simply Bassin’ entry form are in participating shops. Sign up (mere $20) before heading out. Bigger bass are already in the system, mainly Delaware Bay area – but on the move.

Winds have kicked in from the west and should slowly dry things out and, eventually, knock down the surf and high tides.

That was a helluva rainmaker we just had, essentially a one-day wet nor’easter. It may muddy the bay a bit on the whole, but you will never see the bay so clear as it will be through May. While I could also add clean to “clear,” that might muddle the concept a bit. The bay is often at its healthiest – and liveliest -- when it’s turbid in the summer. Providing the turbidity is not an algal overgrowth (or road runoff after a rain), a lack of clarity is most often a healthy sign of vital nutrients in the water.

Why is it so clear, bay-wise? Storms and freezes and storms and freezes, etc. The bay has been purged by storm tides, then sanitized by a couple fast and deep freezes. Admittedly, even the good-guy algae and nutrimental substances such have been laid low. Via spores and the reintroduction of planktons and such, eco-friendly things will rapidly replenish once temperature warm. In the meantime, this leaves a cool transparency.

I have yet to try stand-up paddling but on a sunny calmer day the bay bottom looks one will be able to get while SUP-ing should be a blast.

As to what the top-to-bottom clarity means to fishing, I’m thinking not a whole lot. The winter flounder and weakfish are on the move regardless of clarity. The weakies have shown in spurts of sheer gloriousness. The colors on some of the extra-large – near tiderunner – sparklers have been amazing, per photos and reports I’ve gotten. Obviously, many of those caught-and-released weakies (night caught) are being seen under artificial light, which sometimes make them seem all the brighter. Thanks to the many highly conservational anglers who are releasing the spawning weaks with care. Female fish during spawn are quite easily injured.

I have only gotten a couple winter flounder reports due in large part to perpetually unfavorable boat fishing conditions. I’m hoping May will finally see a protracted break/brake in wind and weather. I’m not betting on it.

Sadly, gone are those super fun, now nostalgic, days of parking near bayside Ship Bottom with all the old-timers to slow-fish flounder from the bulkheads. Part of the fun there was the occasional hookup with large tog or even eels. Such hookups seemed like fighting a 200-pound tuna after sleepily waiting for the tip-tap – and deadweight fight – of a flounder. It was even fun when the floundering slowly gave way to the first arriving blowfish.

Bassing is flaring and falling. The sharpies seem to know how to work the beachfront, even with artificials. One such showoff, has an interesting repertoire of diamond jigs (teasers), chunk jigs (Fin-S and plastics), slow diving plugs, faster sinking plugs and even some surface plugs – all to test the waters. A cool option that is working – and oft does in spring – are fake eel plastics on either a classic squid or (more commonly) simply rigged on a Spro or so. Even sluggish bass hit eels fast and hard.

Bait fishing is, somewhat sadly, the best chance at nabbing a keeper striper. I envy all those who have the patience and baiting knowledge to work a couple/few dead sticks while lounging nearby in truck or beach chair.

I was telling someone about the days when I gave bait fishing a try but elevated the action a bit by tying teasers or larger herring darts on droppers loops, up the line from the bait. That way, I could hold the rod and give it some jerks now and again to add life to the artificials – and my interest level. My thinking: Fish might grab the teasers/darts – and I had some blasts on them -- or those danglers would attract fish to the bait below. Yes, that’s ADD thinking all the way. Hey, I didn’t worry as much over possibly having lost my bait, I still had the danglers. I knew that concept was getting out of hand when I was soon throwing out a feeble chunk of bait but five or more dropper loops above, hosting every type thingy I could hang out there. It looked I was throwing out a trolling umbrella.

The captains of the Beach Haven Charter Fishing Association are making the final touches on their boats and gear as the 2014 fishing season gets ready to get rolling.

As the air and water temperatures in the Beach Haven area slowly start to rise, the fishing action is equally slow in picking up. Over the past week there has been a definite uptick in the striped bass action with more and more keeper bass being landed on a daily basis. A few bluefish are making their way into the mix and some very nice black drumfish have been landed. In addition, some anglers with the know-how are picking up some "tiderunner" weakfish.

The BHCFA recently welcomed its newest member, Captain Gary Dugan of Irish Jig Sportfishing. Captain Gary berths his two boats on the mainland in the Tuckerton area, but regularly picks up anglers and parties on Long Beach Island for his trips.

Captain Gary reports some small stripers caught off Graveling Point while anchored in 6-7 feet of water. He says the ticket is clam for bait with plenty of chum in the water to stir up interest. With the influx in the drumfish, He adds that he may be targeting them this weekend in addition to the linesiders.

Captain John Lewis of the "Insatiable" reports he has been working hard on getting his boat back into its slip at Morrison's Marina in Beach Haven. Weather has been a factor in slowing his work schedule down. He has been tracking a warm water eddy far to the east in the ocean that is moving toward Beach Haven at a rate of about 60 nautical miles per week. He is hoping that this movement could result in the possibility of an early tuna bite off Beach Haven.

WE HAVE A WINNER! First keeper striped bass caught from land, Graveling Point 8:39 pm., checked in at Scott & Mo's and officially weighed in in 4/20 6:15 a.m. Congrats to Dave Curry for the $100 gift certificate.