IMPORTANT: SALTWATER REGISTRY IS BEING CHECKED. DON'T LEAVE HOME WITHOUT IT.  Friday, May 23, 2014: You always hear it’s not the heat it’s the humidity, well in angling the saying is “It’s not the r…

IMPORTANT: SALTWATER REGISTRY IS BEING CHECKED. DON'T LEAVE HOME WITHOUT IT.

Friday, May 23, 2014: You always hear it’s not the heat it’s the humidity, well in angling the saying is “It’s not the rain it’s the wind.” OK, so maybe I just made that up but I’m getting hyped for the holiday weekend, which could see drippage but, hopefully, some workable winds, mainly Sunday and Monday. That makes fishing potential fair to good for the weekend; mainly bayside and inlets for fluke-seekers. Just watch for any nasty-ass thunderboomers. Even small ones can ruin a day. The cool thing is the dead-on accuracy of radar -- and everyone’s ability to monitor same on cellphones or onboard wi-fi laptops and smarts.

The fish are there, especially the blues, I had put in some videos on bluefishing the South Jetty and apparently struck a chord for many weekend warriors, I got plenty of response from folks saying, “I’m there …. Just hope the blues still are.” They still are as of today, though the tides seem to play a role, with incoming bluing up the best closer to the lighthouse and the far end of the jetty less concerned with tides and more so with the cruising past of bluefish schools, at any time. Metals are great. Teasers are superfluous. Plugs not only draw a little less action but present that unhooking mess when trebles dig deep – as finger-severing teeth clamp down when trying to unhook.

The bassing is iffy for most though fairly stellar for others. I know that’s a broken-record report but it plays out in reality. It’s either the skill level or luck level (in finding a hot spot) that sperates the hookers from the also-casters. Per usual, bait is the surer way to not only find a striper but also find a striper to invite home to diner. This BBQ weekend is one of those times that many an otherwise released bass won’t fair so well – or, will fare well.

I had a wham-bam hookup session, mid-island. I went plastic (my favorite hued Wildeyes) and a couple bass responded quickly. Both were small, though one was close enough to keepage that a passing couple asked if I wanted the fish – with that tone of “If you don’t want it, we’ll take it.” I explained the size shortage and they moseyed on.

Getting grumps galore about the “sandshark” presence. They’re mainly smooth dogs, though the first fluke anglers are seeing some (edible) spinys. The omnipresence of the dogs brings up that weird debate over both species being overfished. While evidence would highly indicate otherwise, management is sticking to its regulatory guns regarding commercial harvesting them. I did see an interesting dogfish carcass on the beach. It had been filleted. I like it – even if they were cat bound slabs of meat.

Make sure to sign up for the Simply Bassin’ 2014. Now is when the hooking picks up. Sign up as Captain’s Quarters, Fisherman’s HDQ, Surf City B&T, or Viking Outfitters.

Drumming should be decent this weekend, especially if ocean winds hold folks at bay. I’m sure there will be some drum hooked as fluking bycatch, Little Egg area especially. Tough bring-in on lighter gear. By the by, crabs (shedders preferably) are a fine coaxer. Clams still the easiest and cheapest. Simple gear rules. Purists do a direct hook tie on ( to tag end) with a dropper loop tied about 18 inches up from hook.

Seabassing is fair to middling. Per usual, it’s first-come/first-served at any structure. It doesn’t take long for a piece of reef or a wreck to get de-bassed – before a new batch of migrator moves in. Cooking seabass whole maximized the meat take.

Good start to the weekend 33 inch blue, skunk is off my back finally !!!

Had Pete Menges and Tom Altman out yesterday afternoon (Wed). We ran just north of the Bathing Beach and found some caually flipping bunker. Minutes after snagging a few baits Pete's Cabo 80 was screaming, 200 yards non-stop against full drag, didn't even think this was a bass, I was waiting to get bit off by a thresher shark. While Pete was doing battle, Tom's bunker is getting crashed on the surface by a second big bass, but that fish is lost after a short time. All the while, a huge finback whale is surfacing and full breaching just offshore of us.

It was a very surreal 10 minutes and I got most of it on video:
http://www.youtube.com/watch?v=oxYY7YewKpw

Attached is a pic of Pete's 33 pounder as well as a 38 pounder we trolled on a white Maja spoon Monday afternoon in that awful southeaster that cut our trip short.


Trolling spoons and snagging are both producing 25 to 40 pound fish. It's a great time of year!


I just added an afternoon open boat for the Tuesday after Memorial Day, Sept. 27, 1 PM to 7PM, $150 per man, 3 people max, all fish are shared. I also have Sun and Mon, June 1 and 2 available for charter or open boat. We will be sailing two trips a day on Sat, Sun, and Mon's. See you out there,

Romance and Adventure on the Great bay today . A message in a bottle was discovered by two of our first Kayak renters Rachel Lewis and her Boyfriend Mike Sallese. Here is her story in her own words .


After a long day of fishing (unsuccessfully) We decided to our luck at Kayaking . We headed toward Parker island And decided it looked worthy of exploring .

We beached our Kayaks ,climbed ashore a nd around the island . We weren't on the island more tahn five minutes before a large glass bottle caught our eyes . To our pleasant surprise there was a note inside. A classic message in a bottle . To add to the surprise it was a map . To what we will have to find out . We may not of caught anything any fish but i think we got something better ! taken form a hand written account from Rachel Lewis and Mike Sallese . 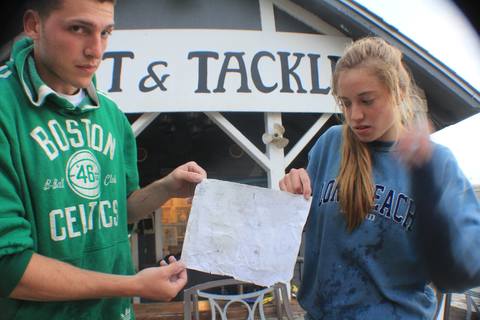 Some nice bass caught north of Barnegat Light in the boats yesterday with the snag and drop. John sent us this picture from his 2-8 trip last evening. He reported plenty plenty of bait and fish.

More than 1 trillion pieces of plastic trapped in Arctic sea ice could be released in the next decade, a new study shows.

Nearly 300 million tons of plastic was produced in 2012. Large amounts of this ends up in the ocean, near coastlines or in swirling eddies such as the Great Pacific garbage patch. A new study has found plastic debris in a surprising location: trapped in Arctic sea ice. As the ice melts, it could release a flood of floating plastic onto the world.

In a study published recently in Earth’s Future, scientists argue that as Arctic ice freezes, it traps floating microplastics, resulting in abundances of hundreds of particles per cubic meter. That’s least two orders of magnitude greater than those that have been previously reported in highly contaminated surface waters, such as those of the Great Pacific garbage patch.


The authors estimate that, under current melting trends, more than 1 trillion pieces of plastic could be released in the next decade.


The scientists based their counts on four ice cores gathered during Arctic expeditions in 2005 and 2010. The researchers melted parts of the cores, filtered the water, and put the sediments under a microscope, selecting particles that stood out because of their shape or bright color. The particles’ chemistry was then determined by an infrared spectrometer. Most prevalent among the particles was rayon (54%), polyester (21%), nylon (16%), polypropylene (3%), and 2% each of polystyrene, acrylic, and polyethylene. Rayon can be found in clothing, cigarette filters, and diapers, Science Magazine writes.


Another study from 2013 suggests that a garbage patch similar to the existing five large garbage patches in the subtropical oceans may form in the Barents Sea.

Russell Short fished the surf this afternoon. He reported catching bass blues and this 27" weakfish. He caught most of his fish on metal (kastmaster) but also got fish on a yellow Bomber.