3/26/14 We're down to the final days of accessing Holgate before the April 1-Sept. 1 bird closure kicks in -- and kicks me out. Oh, well, time to find some mix-and-match alternatives to my near … 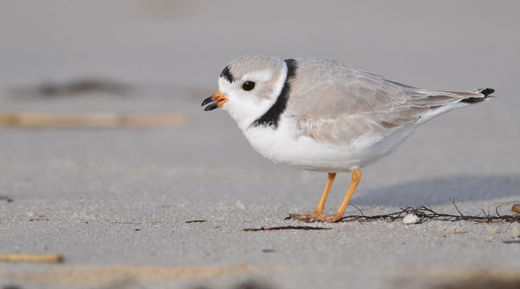 We're down to the final days of accessing Holgate before the April 1-Sept. 1 bird closure kicks in -- and kicks me out. Oh, well, time to find some mix-and-match alternatives to my near daily drives to the far south end. Not that anything can replace the wilderness area -- the last bastion of un-development on LBI. 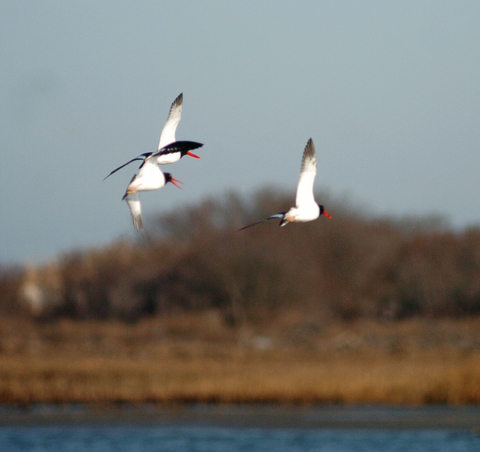 There are still snowy owls in Holgate, which now could present a very real danger to piping plover and a daunting dilemma to the Forsythe Refuge. I promise I'm right as rain when it comes to snowy's willingness to take prey that are much smaller than ducks. Years back I collected a dozen boluses (regurgitation balls) from Holgate snowys and six had sanderlings and four had mice within. I have absolutely no doubt the snowys would scarf up plovers, with a relish. The bad part is the plovers have no sense of the dangers posed by a diurnal (daytime) owl. I'm guessing the likes of now-arriving oystercatchers are wary enough to see an owl coming at them. In fact, snowys and oystercatchers crosses paths late last fall with seemingly little interplay -- though "play" is a distinct euphemism in this case. 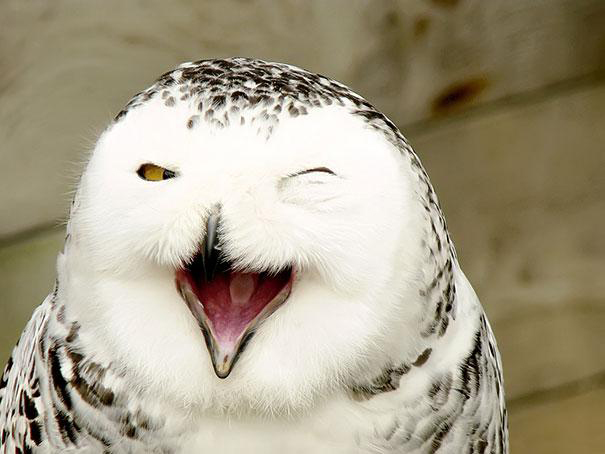 I did a bit of nostalgic pickerel fishing prior to the snow and cold -- that one warm day. I went to a very secret lake, i.e. full-blown trespassing on my part (private cranberry farm area). Despite the hideous, hard-frozen winter we had, all the regular pickerel were out and eating in the shallows. And, yes, I know they're regulars. I've caught most of them before.

Ask any chainside angler how easy it is not know which pickerel are which -- and where. It's doubly easy for me because I fish unfished areas and I'm also a premier pickerel unhooker, something that takes time, patience and bona fide talent -- starting with using wet hands and never squeezing a fish too tightly. I also use spinners with single hooks. When pickereling, trebles are insane overkill. 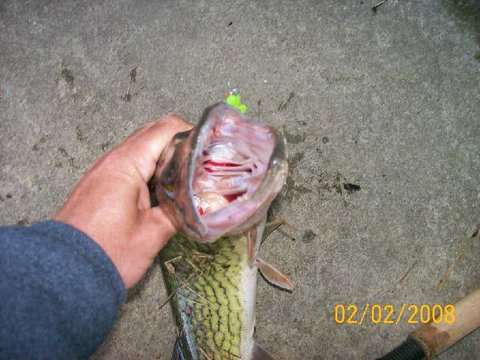 Most importantly, I have mastered -- with both pickerel and stripers -- the humane art of through-gill-plate removal of throat-stuck lures. By pulling a duly disengaged plug/spinner/lure out through the gill plate, you avoid the dastardly rehooking syndrome, whereby you painstakingly unhook one barb on a treble and simultaneously drive another one in even deeper. Removing a deep-throated lure through the gill plate allows the barbs to slide harmlessly over the flesh of a fish. Sure, the fish is usually far from cooperative but that's where patience and persistence pays off. To me, successfully releasing a fish that had been horrifically hooked is a high-fiveable accomplishment, damn near as fulfilling as fighting in the fish.

I assume winter flounder season has begun, March 23, based on last year's regs, which default to 2014 if unchanged. It is about to become a year-round fishery once the new regulations are signed into law.

RFA ON A ROLL: I recommend going to the website below for a cool look/read on the RFA. The site offers an advanced method of displaying it “Making Waves” publication.

(Click on right-pointing arrow to turn pages. If copy is too small, click on page to enlarge print.)

RFA is turning it up a big notch on the DC lobbying and angler-supports front. The group is more powerful than ever and is constantly improving its representation of fishermen at local and national levels.

Importantly, RFA is now fostering a greater solidarity among anglers. Per its literature, “RFA executive director and lobbyist Jim Donofrio explains how ongoing pressure by grassroots angling activists under the RFA banner have made clear the need for an overhaul of the Magnuson Stevens Act in order to better represent saltwater anglers, and perhaps unite the recreational fishing industry.”

Job well done goes out to the NJ Beach Buggy Association for its cleanup at Holgate. I was committed to a Habitat for Humanity project at my house in Ship Bottom (Habitat is amazing!). I got word of the great turnout from a number of participants. Here's a press release from the Refuge:

Members of the NJ Beach Buggy Association pose proudly next to the dumpster they filled with debris cleaned from Holgate, the section of Forsythe NWR at the southern tip of Long Beach Island.

Over 120 volunteers, most of them members of the New Jersey Beach Buggy Association, gathered at the southern tip of Long Beach Island last Saturday morning to do a beach clean-up. When the sand had settled, two huge 30-yard dumpsters had been filled with trash and debris, much of it left over from Superstorm Sandy.

The area, known as Holgate, is part of the Edwin B. Forsythe National Wildlife Refuge. This particular section of the refuge is a federal wilderness area, and consists of about 3.5 miles of barrier beach and dune, pristine except for the junk that Hurricane Sandy and other storms deposited there.

“We are thrilled that the New Jersey Beach Buggy Association did such an outstanding job cleaning the beach and dune area of Holgate” said Virginia Rettig, manager of the Forsythe Refuge. “Their dedication to New Jersey’s beaches is commendable.”

The bulk of the debris was pieces of wood from docks and buildings, along with parts of boats, trash containers, and other household waste. A few unique items were found, including a stuffed-animal replica of a Snowy Owl.

New Jersey Beach Buggy Association members volunteered not only their time and labor, but their beach buggies, using the vehicles to haul heavy debris up the beach to the waiting dumpster, where it was offloaded.

WASHINGTON, March 24, 2014 —  Chris Christie, embattled governor of the Garden State, is facing an important decision concerning the new gun control legislation fast tracked through the New Jersey legislature: the Governor has to weigh the impact signing it or vetoing it has on his prospects for one day finding himself behind the Resolute Desk.

The bill would bring down the magazine capacity limit in New Jersey from fifteen rounds to ten rounds. This covers weapons that have both detachable and fixed magazines, which would expand the banned gun list in the Garden State dramatically. The new ban would include some very popular and widely held .22 rifles which have fixed tube magazines with higher capacities than the new gun legislation would allow. In addition, there is no grandfathering clause or period of amnesty. Essentially upon the signage of this law, and its implementation date, those who hold these weapons would be guilty of second degree felonies.

Proponents of the bill defend the legislation with claims that it would help curb gun violence in New Jersey. But what is really behind this move? Criminals don’t exactly check their weapons to make sure they comply with the law. Certainly they don’t read up on current firearm legislation and upon learning that their guns are no longer in compliance, line up to turn in their illicit items. It does not work that way, but that is a dead horse beaten far too often. We all know that law breakers don’t follow laws.

So what else could be behind this newest gun control push in New Jersey?

We all know that New Jersey, despite their Red governor, is a blue state. And there is nothing more in vogue in Blue states than treating gun owners like criminals. Could this be just another push by Democrats in an anti-gun state making their latest anti-gun suit?

Perhaps, but that is not the only reason.

Chris Christie is their target. Many among Democratic leadership still believe that he is the best hope the Republicans have to defeat Hillary Clinton in 2016, and any way you slice it any action taken by the governor in this case is damaging.

If he signs the bill, he will run into a world of problems. He is already seen as a RINO (Republican in name only) by much of the Conservative right, and based on his previous actions towards guns in New Jersey, signing this would only cement his categorization as an Establishment man and not a friend of American Conservatives. In addition, it will grant him the ire of the NRA who will use this as an excuse to throw their considerable weight behind Rand Paul, or Ted Cruz. During the primaries, pro-gun candidates will score points with Conservative voters by painting Christie as an anti-gunner and enemy of the Second Amendment. All of these situations would be detrimental to his 2016 prospects, and may cost him the primary bid.

Not signing it has an entirely different set of problems for the New Jersey governor. If he uses his veto power and stops the bill then the Democrats will use it to drive a wedge between him and moderate minded voters and independents who are still on the fence regarding Christie. It is not enough on its own to put a bad taste in the mouth of potential Democrat voters, but many have had enough bad bites of Christie goulash to choke down much more. In addition to the voters shying away from him as a result, the liberal media and the Democratic leadership will eat him alive for failing to sign this legislation into law.

There will be interviews and news reports about how Chris Christie is in the pocket of the NRA, how he does not care about the lives of children, and how he vetoed it to assuage the angry mob of right wing nutjobs banging down his door to tear up the law. If he wins the primary, he will have to answer accusations during debates from his Democratic opponent of why he failed to sign into law gun legislation that would have lowered crime in New Jersey. Again not enough to knock him off the tracks, but enough to make for a bumpy ride.

In the end, this is a very well thought out move by the Democratic legislature. Christie was, and still may be, the best hope of beating Hillary Clinton in 2016. But the problem is that by signing this bill it pushes him away from the Republican voters he needs to reach the 2016 election. It won’t happen if he is seen as soft against the gun-control lobby. If he doesn’t sign it, it will simply provide his enemies with cannon fodder when he eventually runs in 2016.