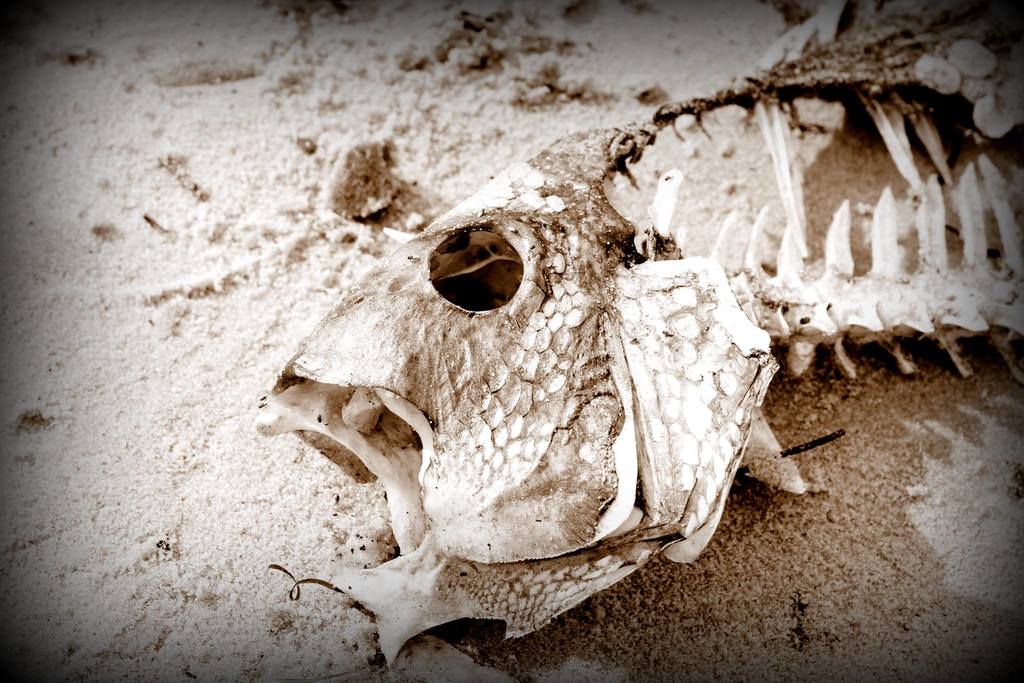 orning. Why would anyone targeting a protected species us this kind of tackle and think that anything caught would have a chance of survival? And before someone says how do I know it was the same fish, I don't think there are too many Sand Tigers swimming along the beach with a fresh tuna head in their stomach, and I am sure that is what the released one was caught on.

Polly's Dock Pollys today a chairman of the board a SNL alumni and Family — at Pollys Dock Boat Rentals.

Polly's say's keepers love our boats. Guess who and family enjoyed a day on the bay and the dock Big Mickie caught his first fish and it was a nice keeper . The Chairman of the board , enjoyed his families first Paddle_boarding as well . Every boat that went out today im happy to say had at least one keeper . The Fluke are here .

Alliance for a Living Ocean

Former MATES Academy Students and Mr. Brian Coen are in Nicaragua working with Waves for Water to provide clean drinking water. Our Summer Programs Leader, Joe, is also on this trip and we're looking forward to more photos and updates when he returns.

Having been to this area one can only imagine how stoked these people are.

When people think of New Jersey — the Garden State — they usually think of fresh produce.


However, in 2012, New Jersey landed 108.5 million pounds of fin and shell fish, valued at $187.7 million, according to Lynne Richmond, spokeswoman for the state Department of Agriculture.


The Port of Cape May itself is ranked 11th in the nation for value of landings which totaled $72 million in 2012.


Not to mention, the commercial fishing industry accounts for more than 50,700 jobs in the state.


Joe Atchison, agriculture marketing specialist for the New Jersey Department of Agriculture, said the Jersey Seafood label serves as both a marketing/branding program and as a quality grading program.


"Any wild-harvest fish or shellfish landed in New Jersey may be referred to as 'Jersey Seafood,'" Atchison said. "However, for aquacultured (farm-raised) shellfish to carry the designation of Jersey Seafood on its packaging, the grower must have an Aquatic Farmer License issued by the New Jersey Department of Agriculture and the product must follow strict HACCP (Hazard Analysis and Critical Control Points) guidelines for safe storage and shipping to assure freshness and quality."


"Our biggest value harvest is sea scallops," he said.


Because the fishermen are fishing responsibly, the waters off New Jersey's coast are full of fresh, delicious seafood.


"They want to be sustainable with everything they do," Atchison said of the fishermen. "They want to fish responsibly as well."


Fishermen catch flounder, monk fish — which is known as "poor man's lobster" because it's firm meat resembles that of the lobster — and tuna.


"Some of the tuna we land is shipped to Japan because it's such high quality, they use it for sushi," Atchison said.


Menhaden, or bunker fish, is another big export.


"Some of the larger fisheries in South Jersey package 40-pound boxes of menhaden or bunker fish, which many people think of as bait," Atchison said. "But we ship it to African ports, and fish mongers there buy a box and take it into villages. They sell the frozen fish separately to families who can cook it and have fresh fish for dinner that night."


Anything landed by a New Jersey fisherman is considered Jersey Seafood, Atchison said, including squid for calamari, blue crab and even lobster.


"Maryland is known for its blue crabs, Maine for lobster, and there's been a push to make Jersey known for its scallops," he said. "And our surf clams and quahogs are first in the nation for chowders and clam strips."


So, even though the Garden State is well-known for it's fruits and vegetables, seafood is also an important part of the economy.


"We do play a big role in the seafood industry," Atchison said. "After all, the oceans are a garden, too."

Four years after a shipwreck was revealed at Ground Zero, a new report details how tree rings helped establish the origins of the wooden vessel.  COURTESY OF LOWER MANHATTAN DEVELOPMENT CORPORATION, VIA COLUMBIA UNIVERSITY

At 22 feet (6.7 meters) below today's street level, in a pit that would become an underground security and parking complex, excavators found the mangled skeleton of a long-forgotten wooden ship.

Now, a new report finds that tree rings in those waterlogged ribs show the vessel was likely built in 1773, or soon after, in a small shipyard near Philadelphia. What's more, the ship was perhaps made from the same kind of white oak trees used to build parts of Independence Hall, where the Declaration of Independenceand U.S. Constitution were signed, according to the study published this month in the journal Tree-Ring Research. [See Photos of the Ship and Its Tree Rings]

Archaeologists had been on-site throughout the excavation of the World Trade Center's Vehicular Security Center. They had found animal bones, ceramic dishes, bottles and dozens of shoes, but the excitement really kicked up when the 32-foot-long (9.75 m) partial hull of the ship emerged from the dirt.

The vessel was quickly excavated, to prevent damage from exposure to the air. Piece by piece, the delicate oak fragments were documented and taken out of the rotten-smelling mud. The timbers were sent to the Maryland Archaeological Conservation Laboratory, where they would be soaked in water to keep the wood from cracking and warping.

A few timbers were sent back to New York, just 20 miles (32 kilometers) north of the World Trade Center, to the Tree Ring Laboratory at Columbia University's Lamont-Doherty Earth Observatory in Palisades, New York. Researchers at the lab dried the fragments slowly in a cold room and cut thick slices of the wood to get a clear look at the tree rings. 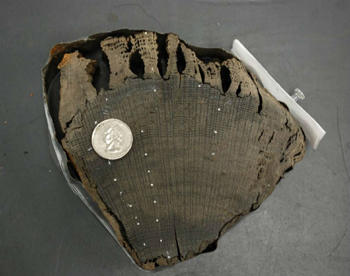 Rings in the white oak timbers used to build the ship reveal that the vessel was built around 1773 near Philadelphia.


The team established that the trees used to build the ship -- some of which had lived to be more than 100 years old -- were mostly cut down around 1773. Then, to determine where the wood came from, the researchers had to find a match between the ring pattern in the timbers and a ring pattern in live trees and archaeological samples from a specific region.


"What makes the tree-ring patterns in a certain region look very similar, in general, is climate," said the leader of the new study, Dario Martin-Benito, who is now a postdoctoral fellow at the Swiss Federal Institute of Technology (ETH) in Zurich. Regional ring patterns arise from local rain levels and temperatures, with wetter periods producing thicker rings and drier periods producing smaller rings, he said.

Martin-Benito and his colleagues at Columbia's Tree Ring Lab narrowed their search to trees in the eastern United States, thanks to the keel of the ship, which contained hickory, a tree found only in eastern North America and eastern Asia. Otherwise, the researchers would have had much more difficulty in limiting their search, as oak is found all over the world. [Shipwrecks Gallery: Secrets of the Deep]

The ship's signature pattern most closely matched with the rings found in old living trees and historic wood samples from the Philadelphia area, including a sample taken during an earlier study from Independence Hall, which was built between 1732 and 1756.

"We could see that at that time in Philadelphia, there were still a lot of old-growth forests, and [they were] being logged for shipbuilding and building Independence Hall," Martin-Benito told Live Science. "Philadelphia was one of the most -- if not the most -- important shipbuilding cities in the U.S. at the time. And they had plenty of wood so it made lots of sense that the wood could come from there."

Historians still aren't certain whether the ship sank accidently or if it was purposely submerged to become part of a landfill used to bulk up Lower Manhattan's coastline. Oysters found fixed to the ship's hull suggest it at least languished in the water for some time before being buried by layers of trash and dirt.

Previous investigations found that the vessel's timbers had been damaged by burrowing holes of Lyrodus pedicellatus, a type of "shipworm" typically found in high-salinity, warm waters -- a sign that the ship, at some point in its life, made a trip to the Caribbean, perhaps on a trading voyage. Martin-Benito speculated that the infestation might have been one of the reasons the ship met its demise just 20 or 30 years after it was built.

"I don't know much about the life expectancy for boats, but that doesn't seem like too long for something that would take so long to build," Martin-Benito said.

FISHMONSTER ALERT!
Travis from Tampa, Florida caught this 39.8 lb. BEAST of an African Pompano fishing with Captain Jack Carlson of Two Conchs Charters out of Big Time Bait and Tackle in Marathon.
WOW!!!!!!! 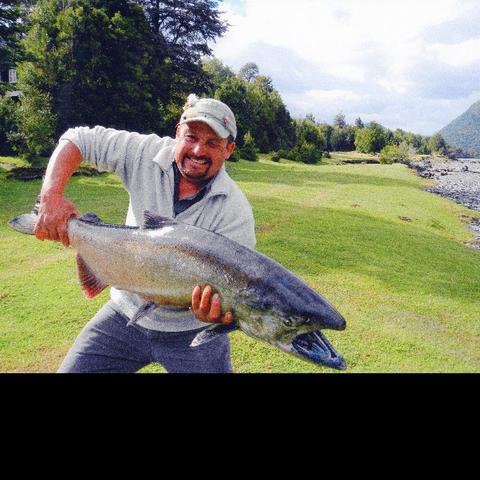 Angler Tyler Contento of Ewing, New Jersey was fishing a bluefish chunk for sharks when he hooked this spiny butterfly ray on a Tica Dolphin rod and Van Staal 200 reel. The ray measured 7 feet 10 inches across its wingspan and was over a foot thick.

Spiny butterfly rays move into the coastal areas of New Jersey in the summertime and are usually caught by anglers fishing for sharks. They fight hard and are considered gamefish in some parts of the world. While they are massive, maxing out at a width of about 7 to 8 feet, they are harmless to humans. Their only defense is a tail spine that can cause a painful wound if stepped on. Thanks again https://m.facebook.com/Fishcarver for your donation to the tournament. So beautiful!!