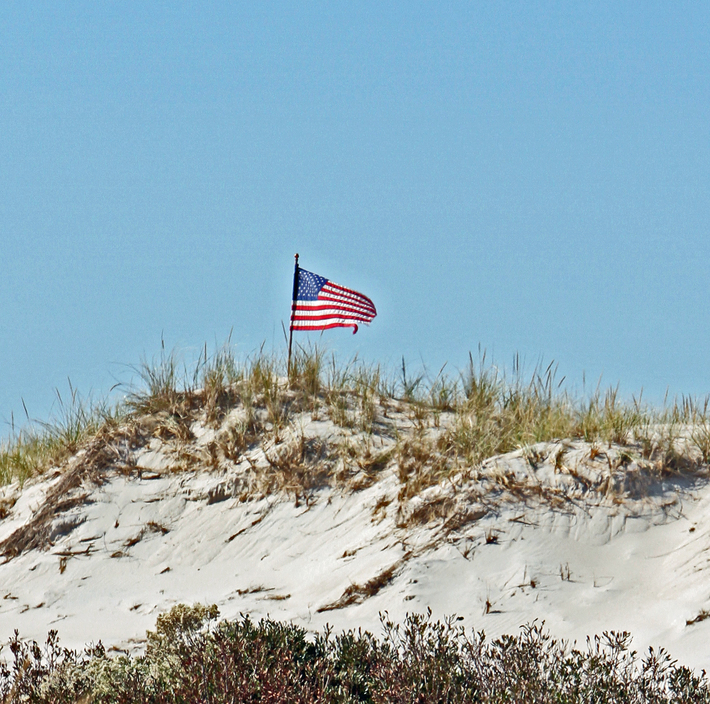 If I was out there fishing that day ... one guess as to where I'd just happen to be ... 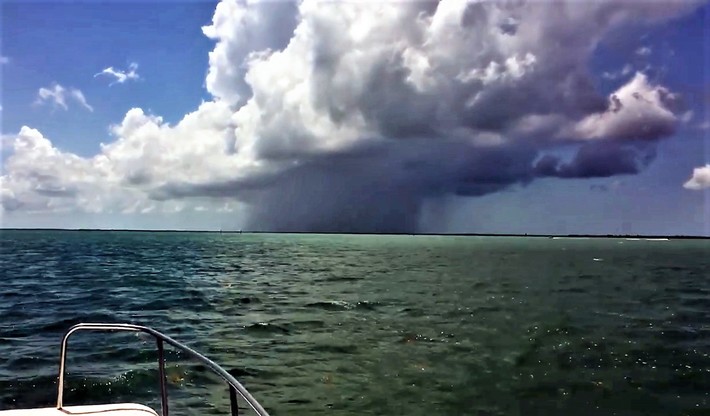 4 & 5/19/2019: I take back everything bad I’ve been saying about the weather … at least momentarily. What a piece of sky sweetness we saw yesterday and part of today. Seeing I get rammy when things get this nice, I’ve been bounding from Island to backbay to deep woods. Cool stuff but too busy to let on.

For those who made a major angling weekend of it, I know for a repeatable fact that large numbers of bass and smaller blue were taken. I tried listing some reports below but hooking overload set in. A couple folks did a bit of a trifecta, mugging seabass, stripers and small bluefish in one outing.

As to those cocktail blues, they are showing like wild. My simply suggesting they might be suffering as a biomass seems to have irked them into showing big-time. That’s right, my writings have that much sway over the entire marine environment. The problem is even this banner vernal showing marks only half of a happy return. There’s that all-telling fall factor. It is needed to round out such a return. But let’s just nix that concern for now. It’s tunnel vision on the fine bluefish bite presently upon us.

While I only allude to boat bassing in here – since these topwater folks half things in the palms of their hands -- I’m looking over some remarkable stripering action from yesterday. Every fat fish now being caught – and a massive number of them are being released – makes it all that much freakier that it was such a bassing failure last fall.  Once again, I’ll suggest that maybe we’ll be reversing that fallen fall pattern. Still, I wouldn’t let this spring bite go untapped to the fullest – just in case.

Of import: “Jay, Haven’t done great with (Little Egg) black drum but the hooking in the Delaware Bay has been insane. Fish over 50 pounds are common. Too many being kept. Sorry, but I can’t agree with what you wrote in your weekly column about people using them for cat food. This is still a rebuilding fishery …”

(There was more to the above email, but it was more about what the writer thinks people are doing with those jumbo blackfish. I must show some discretion in here since even he admits some of his guesses are a stretch.)

I’m also fielding some squawks about the black seabass takes of late. I’m fully obligated to stick with objective angle that the regs fully allow it … and that’s that. Keep in mind there is a highly regulated season on seabass.

Below you’ll see that the USCG has turned up the heat on anyone bassing past 3.45234 miles out, aka three nautical miles. I will state the obvious: Nowadays, nobody can say they accidently slipped into the EEZ. With parallel multi-channel GPS locating, one’s position can be pinned down to within 100 feet – closer to within 10 feet on many occasions. Truth be told, I don’t think many folks toy around with the EEZ, nonetheless, patrols will be a-watch. The good part is they’ll already be near should you suddenly need them when s*** gets real. Safety checks are far more the norm than striper searches.

Below is simply a slew of fun photo stuff – with some trivial things mixed in. Take a second to peruse.
(If anyone knows the divers in the one photo, please let me know I'd like to use the picture in The SP.).

The Atlantic Striped Bass are here. Please make sure you check all your safety gear before getting lines in the water. Life jackets, flares, sound producing device... NJ state regulation require a minimum size of 28” to be able to keep. Any attempt to take, target and possess Atlantic Striped Bass Beyond 3 Nautical Miles from land is prohibited by federal laws. Boarding Teams are out inspecting safety gear and catch.

Pictured here is a healthy 44.5” Bass caught Just off of Barnegat Inlet. There’s no need to be anywhere near the 3 mile line to catch these fish. 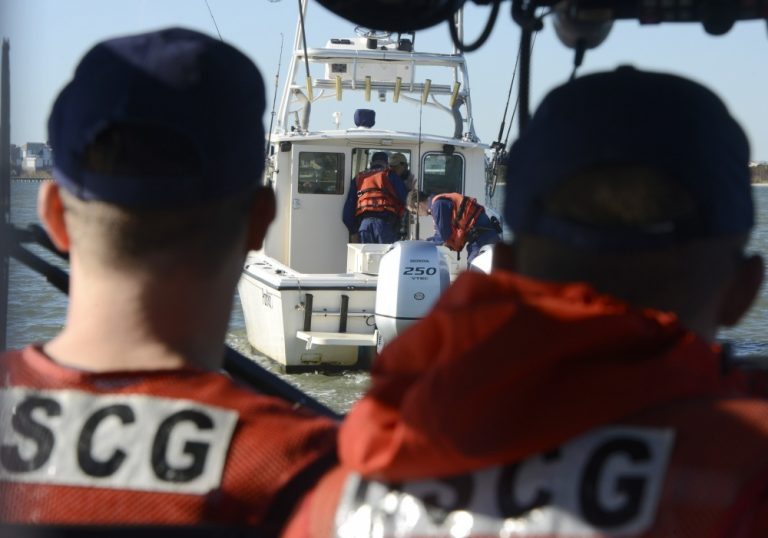 As striped bass arrive in New Jersey waters, the U.S. Coast Guard is ready to issue fines to anglers who catch striped bass outside of the allowable boundary, officials say.

The fine is $500 per fish, and anglers caught with more than five fish could face even larger fines, according to NOAA spokesperson Kate Brogan. NOAA assists the Coast Guard with enforcing the regulation.

A release from Coast Guard Station Barnegat Light said teams are out inspecting fishing and safety gear along with fish catch.

“The Coast Guard and partner agencies such as NOAA are also currently focusing on ensuring commercial fishing gear and tackle is properly labeled and equipped with weak links to prevent accidental whale deaths as part of a nation-wide initiative,” Kahley said. “Weak links allow for marine mammals and endangered species such as right whales to break away from the fishing gear in the event of an accidental entanglement.”

To prevent straying into the Exclusive Economic Zone, the agency recommends that captains use electronic charts and marine band radio.

“Protecting marine resources has long been a Coast Guard mission, and we have Coast Guard members out actively patrolling and enforcing these rules,” Kahley said. “If we find someone who is fishing for striped bass in the prohibited area, they should expect to receive a violation.”

Spotted in the bay by 28th street today. So cool

fished the beach on the northern part of the island this weekend. fished three tide changes, caught a dozen cocktail blues and an single short striper.
birds working the center of the inlet and well past the breakers.
fish are there.

Michael Dringus is with Robert Hyres.

Fun day on the water! Quite a variety in size. But everybody caught something!

Alyse Ford is with David Iacono.

It's been a hot minute...last night was a good night

Barnegat Light spear fishermen. The smiles say it all.

This choke-chain squeeze wins. All the chain-girdled trees at this "No Trespassing" point -- four of them in all -- are dead. Obviously, this slow strangulation began long ago, when ecological mindsets were different. It still waxes modern, begging for greater insights when doing any tree wrappings, even involving seemingly kindly hammocks. Many Internet posts speak of wire clotheslines quickly becoming ensconced within fast-growing trees used as anchor points. That proves it doesn't take all that long to begin the strangling process. Here's one read on what to do: https://calgaryherald.com/…/…/gaaack-dont-strangle-your-tree

Don Brown shared a link to the group: All Things LBI.

PHILLY.COM
Long Beach Island is the family-friendly alternative to party-happy...

Do not over react to this. Simply stay alert to nearby wildlife activity, taking particular note of any aberrant or aggressive behavior, especially involving bats, raccoons, foxes, skunks or (rarely) coyotes. Possums pose very little rabies danger. While the local bat population is very low due to over a decade of of white nose syndrome, take extreme caution should one fly inside a building. https://www.humanesociety.org/resources/theres-bat-my-house

A raccoon tested positive for rabies in Stafford Township, in the vicinity of Village Harbor. Residents should report wild animals showing signs of unusual behavior to Animal Control at 609-597-1000 ext. 8525. Additionally, it is recommended that residents should avoid contact with wild animals and immediately report any bites from wild or domestic animals to your local health department and consult a physician as soon as possible. Finally, be sure that all family pets are up to date on their rabies vaccinations.

The Southern Ocean County Animal Facility in Manahawkin offers free rabies vaccinations every other Wednesday by appointment.
Please contact (609) 978-0127 to make your appointment.

For more information on rabies, please click on the link below.
https://www.nj.gov/…/faq/Rabies-New%20FAQ%20logo_Jan2018.pdf

Bob Misak is with Brynn Misak.

Sean Sherwin with his first ever striper - 28.86lbs and 40”. Congratulations Sean!

Sea bass fishing was ridiculous this morning. Limit of 90 jumbos!

Anglers- are you tired of losing fish!?

We’re here to help.
That’s why we built a better fish hook. 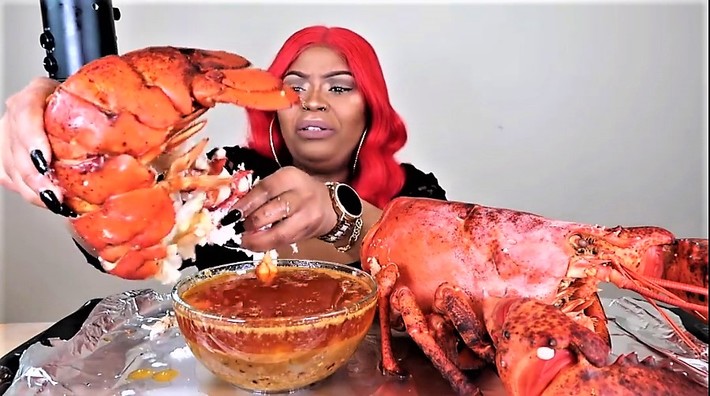 I guess fluke eat there young I caught one today ( bycatch)

Enclosed is this week’s fishing report for the Beach Haven Charter Fishing Association. If you have any questions, my cell phone number is 609-290-5942 and my e-mail address is jamesghutch1@aol.com

The fishing scene in the Beach Haven, NJ, area is starting to break open. This is the time of the year when the bite for spring fish is going strong while the summer fish are already arriving. This makes for a wonderful combination, and the boats of the Beach Haven Charter Fishing Association are taking advantage of it.

The run of big migrating striped bass is within easy reach for trolling along with a range of varying bluefish sizes. Black seabass season has just officially opened, and the inshore structures are loaded with limit catches. Boaters who have ventured further offshore have found hungry bluefin tuna. It is just one week until the long-awaited summer flounder season opens for the icing on the cake.

BHCFA Captain Larry Rosica of the “Dreamliner” went on a short prospecting trip this week just north of Barnegat Inlet and found a nice pair of bass. One was taken while trolling a white bunker spoon and the other on a plug.

Some of the BHCFA Junior Mates ventured out recently with Tucker Blanchard, Jon Kelly, and Raymond Stack finding some good action on bluefin tuna. Another day Maxwell Goldman and Tucker Blanchard had a great day bottom fishing with close to 25 keeper sized black sea bass to 3-pounds.

Captain Brett Taylor of Reel Reaction Sportfishing recently had Rich Sanborn and family out looking for bass despite some strong winds against the tide conditions. The group worked through the conditions with the Minn Kota trolling motor setup helping produce good drifts. They managed a dozen short bass to 25-inches along with a 26-inchblue. A large bass was on for a while near the end of the trip but could not be brought to the boat.

In other news the BHCFA presented their plans to the Beach Haven Borough Council regarding the reef re-nourishment project started by the Junior Mates Program. Also addressing the Council was Junior Mate Liane Lopez who described the deterioration of the current reefs and the need to maintain them.

The evening went well as the Council issued a proclamation supporting the project which will be sent to the other towns on Long Beach Island urging their support for the program.

Trevor & Brad trolling Mojos got this 36.88 lb striper today in close. Wanted to release it but it was gut hooked. 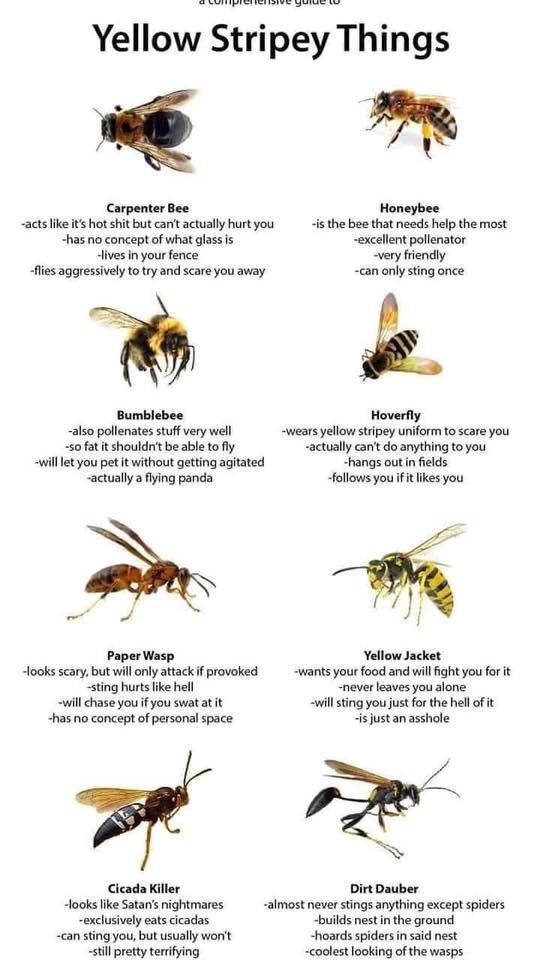 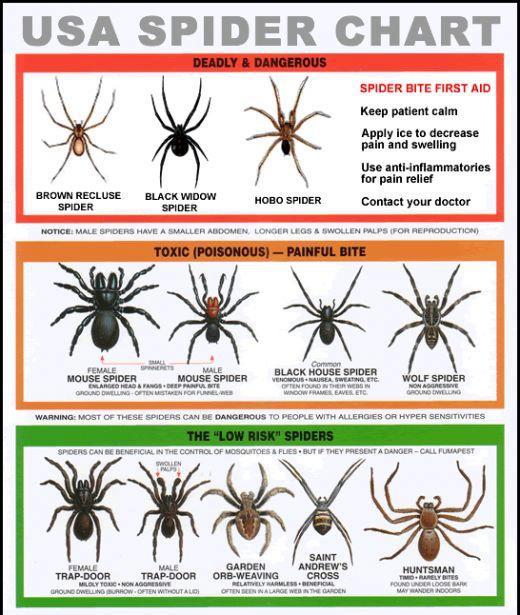 Yesterday at 6:21 PM · Never been more stoked on a fish. Guys been sitting home since January 9th without one complaint. Comes out and slays a cow! Much deserved ! #48.5 @just_one_more_turn Jim M Oler Steven Meyer