We don't often get snow in these parts. Just sayin'.

Sunday, February 15, 2015: What a revoltin’ development this is. Not only are we going to freeze our asses down to the bone tonight but later in the week another similar arctic blast is going to go single-digit on those prefrozen asses  – taking us into the last part of February. I de-friend February. Oh, there’s also that matter of potentially eight inches of snow coming at us tomorrow.  At what temperature does "worst" begin? 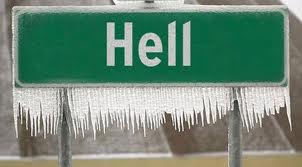 PIPE UP – OR ELSE: As tons of freeze photos flood Facebook, offering a wild look at our imitation of the tundra, it’s the unseen freezing that’s going to do a destructo number on many of us tonight. For older homes – and copper piping – things are surely shivering down below. 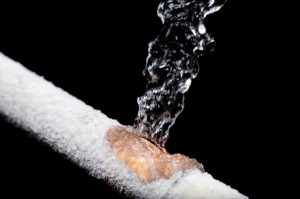 If you think a mere “dripping” faucet is going to be enough to prevent frozen pipes tonight, you better not want a hot shower tomorrow morning.

Screw being insanely water conservative, you can make up for lost water at a later warmer date. Run your cold water at a rate of one gallon every four minutes—about the stream width of a pencil. Also, go pencil thickness on cold water and hot water combo flows – though heavier on the cold.

Below: Flow recommended by Bay City, Michigan, public works -- And they know. Yes, you have to flow the hot water pipes. Hell, 70 percent of pipe repairs after freezing are due to hot water lines breaking.

Prevention tips: -Open under-sink cabinets in kitchens and bathrooms and interior doors to places, such as the garage, where pipes are located.

Hint: Although it’s tough to do, force yourself to get up in the middle of the night to flush the toilet(s) and turn all faucets on full blast – all together works well -- before backing faucets off to a pencil-thick flow. I also have to get my washing machine pumping a bit. No need for  full cycle or anything.

If you're sure to be groggy in the middle of the night, place this sign up near the toilet:

When you leave for work in the morning, don’t be fooled in thinking since you made it through the night freeze-free you can go back to fully closed faucets. Keep things a-drip. You can back off the flow a bit but daytime freezes (especially a.m.) are what often sneak up on working sorts. Keep faucets a tad open to prevent ice-growth in the pipes, which can lead to pressure buildup that leads to bursts.

Q: Should you still run the water if you've insulated your pipes?

A: An incomplete insulation job is probably worse than no insulation. If you're using the foam tubes, you have to look very closely at what's happening at the plumbing fittings, the elbow or tee. Lots of times, people will put the tube on the straight section and leave the fittings exposed.

UPDATED: Woman Falls, Freezes to Death Near her Home in Lakewood
FEB 15 2015 10:42 AM
breaking news tls[UPDATED 3:15 PM] A woman reportedly froze to death after falling near her Lakewood home early this morning, officials tell TLS.

Advertise On TLS »
Olivia Benito, 66, of Lakewood, went with a neighbor to a benefit last night, and then stopped off at the neighbor’s house for a short time, the Prosecutor’s Office said this afternoon.

“The neighbor stated further that Benito, who had consumed a number of alcoholic beverages during the course of the night, departed her townhouse around Midnight to walk home to her townhome approximately two doors down,” Ocean County Prosecutor’s Office Spokesman Della Fave said.

This morning, the neighbor went out to clean her car, when she made the discovery.

“This morning at approximately 7:04 am, the neighbor went out to clean off her car and found the decedent face down in the snow,” Della Fave said. “She attempted aid, dialed 911 and alerted the victim’s husband. The husband was under the assumption that his wife had decided to sleep at the neighbor’s home.”

Benito was pronounced dead at the scene at 7:26 a.m.

The preliminary investigation found no outward signs of trauma or foul play at this time. The Lakewood Police Department, OCPO and OC Sheriff’s CSI await the results of an autopsy by the OC Medical Examiner’s Office before making a final determination in the investigation.

Trail-camera test. Animals don't know what it is. Hmmm.

"If you'd take this stupid frickin' outfit off me s*** like this wouldn't happen!"

3 Droll Yankee feeders hanging from the rain gutters had to filled twice over the last 24 hours.  Loads of birds battling for position on them. I wish I could let 'em in.

Wonder if that guy from Seaside went into the ocean this week..