Below: If there's any doubt that a brown bear can decapitate a human in one swipe ... it would be nice to see it displayed here ... 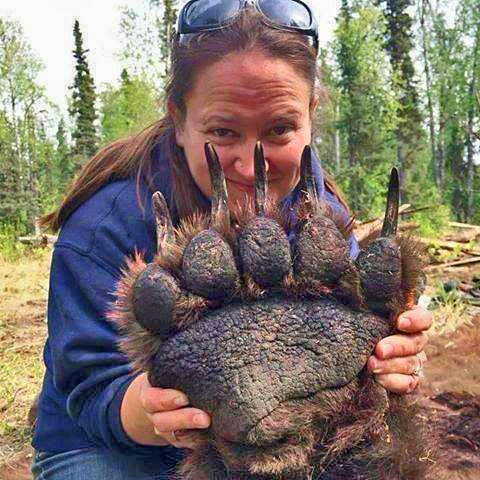 Monday, January 11, 2021: Haven’t talked weather lately since there hasn’t been much to talk of, which isn't a bad winter thing. Admittedly, we’re a couple cumulative degrees above normal for the season, though most of us can attest to the fact there have been some mighty bitey temperatures aflow, especially when beachcombing or clam digging.

I've been sidestepping any chill by metal detecting in well wooded mainland places, those  I’m duly permitted to dig. The problem is how worked over most of those sites have become – due to me, mind you. If you have any insights into sites, I’ll split everything I find with you – or offer metal detecting lessons in trade for locations.

I’m also open to digging artifacts pro bono, providing any pertinent historic items are allowed to sit in museums for a stint.

As to digging in yard zones, I use a trap door removal technique that leaves virtually no damage to lawns and such. It’s done by gridding off a square plot, roughly a foot wide and a foot long. The grid is then dug in one piece, the way they do sod. This is far better than a former method of removing a small plug of turf about the size of the signal/reading. That left spots of dead grass over the place. Using the plot method, a parcel of turf is rolled back, the item located and removed, followed by a roll back of the turf -- no damage, no foul.

The last full-blown yard I dug took place on the lawn of a circa 190-year-old house that was about be resodded. Without meticulous digging constraints in play, short of a three-day dig window, I uncovered over 150 relics, including 54 coins (12 large cents dating back to 1804 and a silver dime worth $400) and 34 very cool buttons (seven military varieties).

Everything I dug there went into an in-house, under-glass display, done by a curator. I was monetarily reimbursed for the professional coin and button cleaning I did. I was also gifted  some large cent “dupes,” those matching the dates of other dug coins in the yard. But my favorite stipend consisted of two glorious lead fishing weights made from Civil War-era rounds, namely .52 Caliber Carbine (Gardner?) bullets, which I believe were Confederate. They were partially/manually squashed at one end and drilled to make sinkers. I’ll try to locate them for a photo. The cool part was the original owners of the house had two sons that fought in the Civil War. Below: An example; "Dug in the vicinity of Drewry's Bluff, Virginia, this is a Confederate Gardner bullet that was used as a fishing sinker. Soldiers would frequently used bullets for this purpose due to their ideal weight and shape. Drewry's Bluff was the site of fierce naval and land battles in both 1882 and 1864. This piece would make a nice addition to any collection." 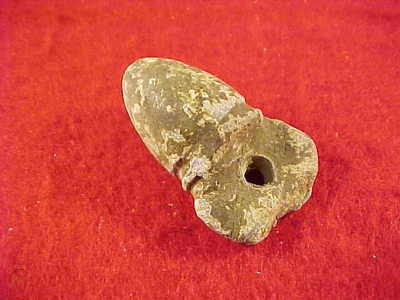 Anyway, I’m sure open for any new digging grounds.

Back to the skies above, we will soon be seeing the arrival of what might be called a minor polar vortex, beginning this weekend and extending into next week. It will be more of a melted down vortex when compared to the recent winter of vortex after vortex, which drove temps into the single-digit realm for weeks on end. In fact, the upcoming vortex is in form only, meaning a large low-pressure system parked in the arctic will drive cold air to another low in the US Midwest, after which a large bubble of frosty air will get rolled toward us.

That last bout of winter vortices: 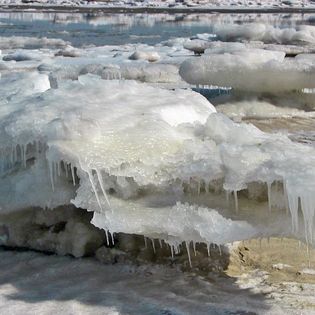 Even when fully pumping, the arriving two-part vortex should not be overly impactful, temperature-wise. Highs in the low 40s and night lows in the mid-20s will prevail with the coldest temps more mainlandish. A wiggle or two in the system could knock those lows down.

Yes, there could be snow mixed in, though mainly lake effect and such. Skiers should fare well, with possible heavier snows in New England and surely snow-machine nights for Pa.

Rolling in another weather direction, there are some long-term indicators that a warmup will arrive as soon as early February. It could even get freaky mild, though mostly across the lower tier of the county, with occasional licks of mildness reaching us. The downside is the likelihood of severe storms when unseasonable mildness is in play.

How bored can one get in winter ... Tell it to the twigs. 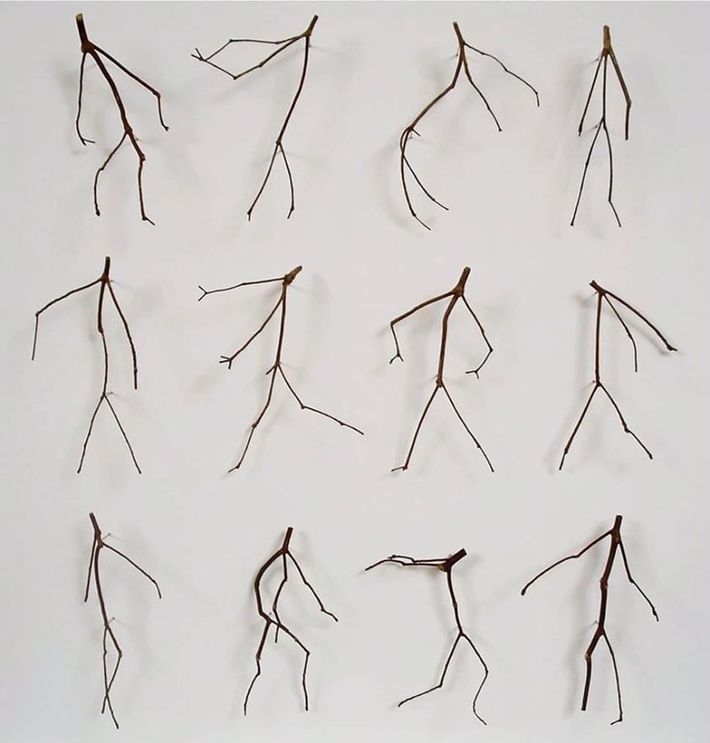 In my last column about Holgate, I was highly remiss in not mentioning this exceptional read: https://www.amazon.com/Tuckers-Island-Images-America-Gretchen/dp/14...

I had meant to hype it but got so immersed in a slew of Holgate images that I forgot. Take some time to read this. It's profiled as:

"Once located between Great Bay and Little Egg Harbor, along the New Jersey coast, Tucker's Island disappeared into the Atlantic Ocean. Sand dunes and native foliage once covered its eight miles. For generations, the Rider family kept the light illuminated, and the US Life-Saving Service provided aid to ships in distress. Two hotels were constructed by island men with building materials salvaged from local shipwrecks. Visitors arrived by sail or steam, and the popularity of Tucker's Island inspired real estate agents to sell worthless lots to unsuspecting buyers eager for their own piece of the shore. Storms battered the vulnerable island; the lighthouse toppled in 1927, the life-saving station washed away, and in 1932, the island was removed from tax records."

Even if you don’t have an eye for birds, you can’t miss the quite large crow-like black birds plying the skies above Little Egg and Tuckerton, usually traveling as loners or in pairs. Those are Poe-made-famous ravens, a tad diminished by the book name, common raven.

Once a common NJ bird, they were blasted to near oblivion by hunters who unfairly equated them with crowish pest, despite ravens being outnumbered by crows a thousand to one. Even when the prejudicial shooting receded, ravens weren’t quick to repopulate, being slow procreators.

"Have you seen ravens in New Jersey?" asks endangerednj.blogspot.com. "They were once numerous in our state. They disappeared as a nesting bird in New Jersey in the 1920s. But in the early 1990s they began to breed once more in NJ and their numbers have been increasing ever since."

It has taken over a century for them to make their presence relatively apparent, though they are still being shot, mainly for the heck of it. They present no crop, herd or pet threat.

I bring up that “pet” angle because more and more people want the elimination of any wildlife that so much as irritates their pets. Come on shooters, there are plenty enough game animals to keep even hair triggers happy. Stick with blasting the critters that overpopulate, though even allowable game is pushing human tolerances. Did you know that river otters are fair game for trappers? Something really wrong there.

Back to black, I’m highlighting these ravens to publicize their braininess. Recent findings show their intelligence is something to crow about.

But how smart can a “dumb bird” be? Just ask smithsonianmag.com writer Rasha Aridi. In an article titled “Four-Month-Old Ravens Rival Adult Great Apes in a Battle of the Brains,” Rashawrites “These clever birds are known for assembling their own tools, possessing a form of consciousness and thinking about the future, earning them a top spot among Earth's most intelligent animals alongside dolphins, great apes and elephants.”

When being watched in captivity – raised from eggs – or in the wild, they are seen as easily among the most active and rambunctious of all birds, seemingly close to attention deficit when it comes to changing tasks and activities at the drop of a hat – which is ironic since hats in the 1800s used to use raven feather for ornamentation. 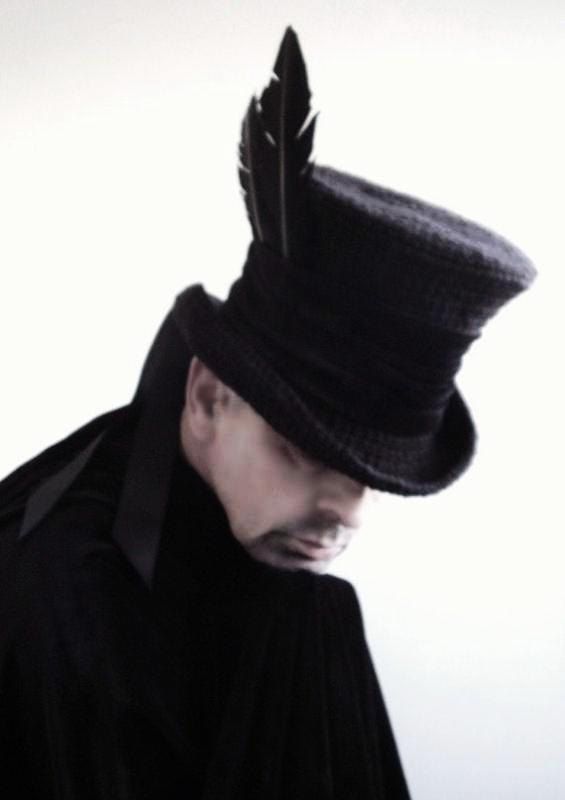 "We now have very strong evidence to say that, at least in the tasks we used, ravens are very similar to great apes," Simone Pika, a cognitive scientist at Osnabrück University in Germany, tells Scientific American. "Across a whole spectrum of cognitive skills, their intelligence is really quite amazing."

As to Jersey's trapping of otters, see:

FLASHBACK SHARE: I promise this is dang close to how it happened ...

As a kid, I was honored to hang out with the last of the previous generation’s hardcore baymen. While there are still some gruzzled kick-ass baymen out there, the former generation was doubly loaded with many clam-hard characters, most of whom took both their occupation and their “tipping” seriously. “Tipping” is an imbibing process meant to beverage away the mind muddling that comes from an entire 12-hour day of clamming through the tides.

One of the last of the great baymen was “Old” Jimmy Sprague. Us kids loved when he’d drive us to the end of Holgate in a truck-ish buggy that wouldn’t stand a prayer of being legal in this day and age. Hell, I got bounced clean off once, musta rolled five times after I hit the sand. Jimmy thought that was just about the funniest thing he’d ever seen, laughing while making me run back to the truck a football field away. Even as a kid, I hurt for a week.

Below: All 100 pounds of me back then ... and apparently hurting from sand rash. 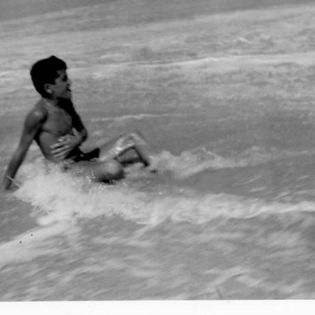 Jimmy was also the kindly gentlemen who told us we could actually hear arriving springtime black drumfish by putting our ears to the bottom of the garvey. “Listen real hard, boys.” And we could hear them! I kid you not. Arriving drumfish make a ton of honk-like sounds underwater. However, Jimmy’s real intent was to wait until we were all wholeheartedly listening to the drumfish, ears pressed to the wood, to then drop an anchor on the boat bottom. I had ear damage that rang through high school and into college. Gospel truth: It finally stopped sounding off when I came up after diving under a huge wave in Hawaii.

We often got even with Jimmy. Despite his bayman bad-assedness, he had an irrational in-water fear of anything touching his legs. And touch we did. We waited until he was into a rhythmic clam-treading trance that came about when spending five hours straight hand-harvesting over 2,000 clams. When we saw his eyes were closed, and he was back treading clams like a machine, we’d slip underwater and touch his leg. I would even grab on and shake it a little.

Boy, that man could scream bloody murder, followed by a curse-laden dash back to the garvey. For an old-timer, he could plow through waist deep water like a golden retriever, dragging his basket in one hand and using his other hand in a motion to both stoke forward and slap at whatever had touched him.

By the time he had reached the garvey, rolled over the gunnel and into the boat, us kids had moved off from the attack point. We’d stand upright, looking mystified and asking, “What’s wrong, Jimmy?!”

“Another one of those damn things touched me! Somabitches!”

“You got that right. Now, where the hell’s my clammin’ flask at?”

To Jimmy’s credit – and adhering to a long-standing bayman’s code – he never once abandoned his basket of clams during his flight from those somabitches.

Below: Right before my clamming days. 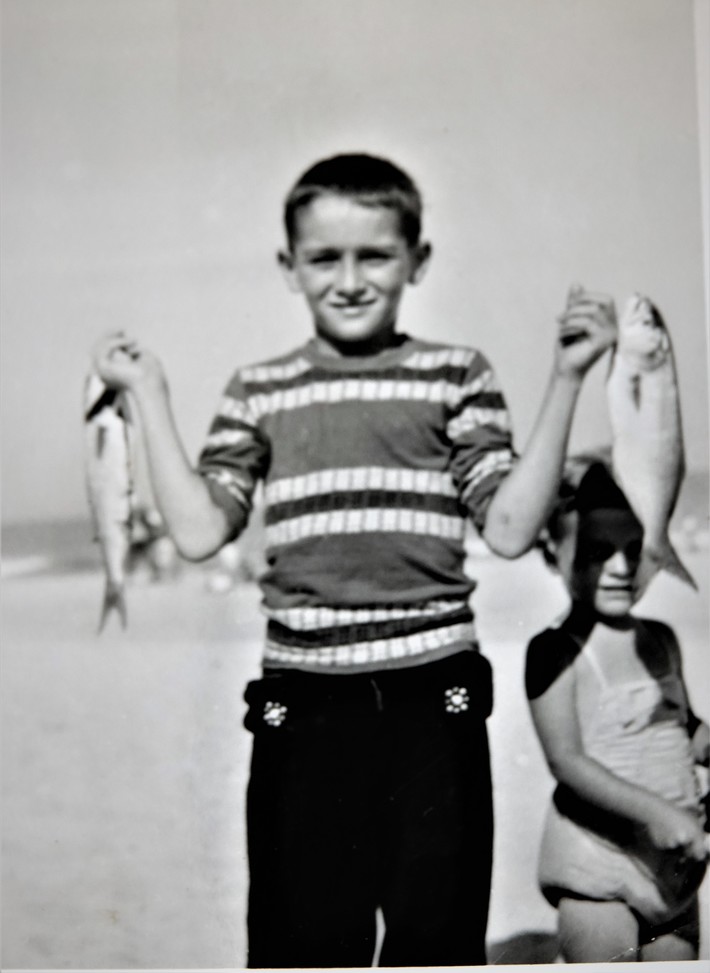