JCAA communiqué:
To All,

Here are the materials for the September 1st call on Black Seabass
and Scup emergency action. You need to register for tomorrow's call
if you want to participate on the call. The ASMFC release about the
call is below. I just finished a 2 hour call on Winter Flounder.

We might as well begin with some Holgate talk, though I know that doesn’t impact a ton of you folks but maybe it’s an interesting read considering that end of the Island continues to fall into the sea at a fiercest fast rate by geological standards. Regardless of the erosion, it Holgate opens to the public this coming week. I believe it’s Tuesday but, technically, it’s when Refuge… Continue

Friday, August 28, 2009: Waves: rapidly building 4- to 5-foot northerly wind swell with redirected southerly ground swell – that takes place when ground swells arriving from the south (TS Danny) get redirected by strong northerly winds, essentially turning the swell direction around to a more northerly direction. Leading to north to south parallel currents along beachline. Obviously, that stirs the ocean up.

Fishing pressure is very down this week, both boat and surf. This is not to say plenty of folks aren’t out there just a sign that end times (Fort Summer) are drawing near – then the huge push of serious anglers for fall. This is not to say the summer-only folks aren’t as dedicated as they come. It just seems to me that the followers of fall… Continue

Wednesday, August 26, 2009: Waves: 2- to 2.5 foot east swell. I hate to be the bearer of bad weather news but if I were you. I’d get any angling in over the next couple days because this weekend cou…

I hate to be the bearer of bad weather news but if I were you. I’d get any angling in over the next couple days because this weekend could very well go down the crapper. Just off the phone with the Weather Service and a fairly sudden tropical system in the Bahamas is about to be named as it turns northward into the Atlantic. While it won’t hit us, per se, combining with an arriving northerly high pressure system it’ll… Continue

CANADA DECLARES WAR: Let’s talk pirates. Pirates, sans Johnny Depp. Pirates with fierce weaponry and even uglier intent. We’re talking Somali pirates, murderous goons emanating from a country gone to the dogs – albeit one of the few places I can actual afford to vacation. Unbelievably, they’ll actually pay my way there. I’m not sure what that “one-way ticket” thing is all about but I hear it’s pretty nice in Somalia… Continue

Monday, August 24, 2009: Waves: Dropping swells. Water temps: Low 70s.
Had a couple fluke reports of very good keeper ratios inside LE Inlet during all the wave action outside. Total numbers of hookups were down, though. The flatties aren’t going anywhere fast, guaranteed – even though the season is running out a breakneck speed.
Bluefishing near Barnegat Light is spot-free. If you want smoker fillets, now is the time to grab them.
(Weekly prewrite)
It sure seems the weakies… Continue

Sunday, August 23, 2009: Waves did not materialize to the expected degree. Still plenty of grind for 5- to 7-foot waves.
A congrats go out to Island towns which did a banner job in alerting the public to the threat from waves and dangerous water related to a close-passing hurricane Bill. Along with a digital sign on Bonnet Island coming onto LBI, towns not only their own digital signs warning of rough surf but Ship Bottom used its automated telephone warning system to alert residents via a… Continue

The main angling news remains the wave action. It continues to build and will peak between this evening and Sunday evening. Don’t be fooled by the downgrading of Hurricane Bill to a Cat. 2. It is huge and generating monster swells. North Carolina is getting battered. Those waves are heading this way. At high tide last night, there were some areas of the Island with beach… Continue


The Atlantic States Marine Fisheries Commission's Interstate Fisheries Management Program Policy Board directed the Summer Flounder, Scup, and Black Sea Bass Management Board (Board) to consider potential overages for all three species and take action prior to September 1. This directive was taken in response information presented to the Policy Board regarding available… Continue

It has begun. Powerful groundswells have already begun to arrive, somewhat ahead of schedule. This is going to be a fierce swell, possibly topping a consistent 8 feet with larger to much larger sets. The buoy reports I was reviwnign this a.m. are already getting rocked.

Had an interesting report from a buddy who took up the challenge to chum for panfish (South End). He got some small blues (no surprise) but “cleaned up” on fluke. “We even had other fluke following hooked fluke up to the surface. That’s the first time I ever saw this with fluke. Best fish of the day was a huge triggerfish.” That action… Continue

That front blew threw like gangbusters last night but lasted only maybe 30 minutes. Some rain but not enough to cause runoff problems in the bay. Calm conditions this morning are going to hang most of the day. Could actually be too light to get decent drifts if ocean fluking. Wear sun block an inch thick.

We should begin watching Hurricane Bill with more than a passing interest. It’ll… Continue

Waves of Sulp in the Surf;
Save That 100-Year-Old

Loads of this-and-that stuff this week – with a tad more “that.”
A logical starting point is this freaky-warm water of late. We topped 80 degrees in the surf, with low 80s being read by some boats near inlets -- where bay water was pouring out.
The warmest I had ever recorded personally was in the late Seventies, when I took two days of 83 degrees readings in the surf. Interestingly, that warm stretch was ingloriously… Continue

Winds picked up throughout the day with plenty of whitecaps and south-to-north current by afternoon. Nice early-day drift for fluke became too fast and most boat in the ocean headed in. Not a thing has changed on the flattie hook-up front. No drifts without fish and few drifts with keepers. There is a tendency for keepers to be a bit bunched up so more than a few folks use the old Clorox… Continue 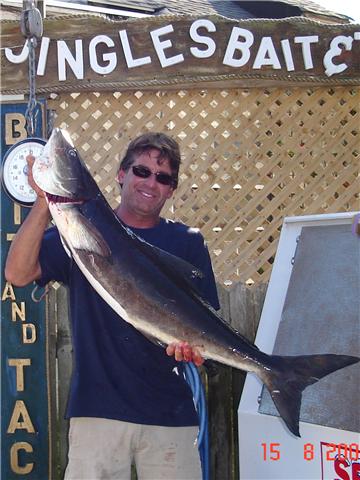 Mike and 32-6 cobia. Sunday, August 16, 2009: Waves: Small. Water temps: Upper 70s with numerous reports of 80-degree plus in some areas. . Water clarity: Good. Lots of fishing pressure on the water, mainly flukers but also folks chasing reef and structure fish, i.e. one tog, seabass and whatever wants to grab on. An couple interesting grab-ons came via Mike Saulle and his 32-6 cobia he caught while fluke fishing Aug 15 2009 in 40 foot of water,… Continue

A few salps washed up on the beach today – a few billion. And I’m fairly serious about that number. White clouds of them washed ashore in ship Bottom and north and south as far as I could see. Just at the end of my street there were millions of this quarter-inch blobs. Today they were so thick you simply couldn’t swim through them. Impossible to grab a breath with them clumping on my face and around my mouth.

While most everyone was calling them… Continue

This stir could excite some bassing action. I base that on even more reports of nice stripers nearshore. “Jay, Got my biggest bass of the year while jigging for bluefish. It was 36.5 inches and as fat as I’ve ever seen a bass. It had spearing in its belly. Have you ever seen stripes like this fish had? What about the sore on the… Continue

Wednesday, August 12, 2009: Waves: Small. Winds: Light early then NE to maybe 10 mph. Look for some of the warmest ocean waters in years. We’re already pushing 77 and light NE winds for the next few …

Wednesday, August 12, 2009: Waves: Small. Winds: Light early then NE to maybe 10 mph.
Look for some of the warmest ocean waters in years. We’re already pushing 77 and light NE winds for the next few days will lead to more downwelling, the pushing in of warmer water. This will keep the baitballs very active. Bunker become very animated in ultra warm water. Of course, stripers and blues aren’t wild about the balminess but the lure of foodstuff should compensate for them being put of by sauna… Continue

A Down-home Locust Hearin’;
Sharks Showing at Every Turn


A HIGH-FLYIN’ HEARIN’: Seeing we’re a-wade amid the soggy doggishness of summer, I want to lead with an olden tale coming from my days of fanatic Pines-ing, i.e., hanging out in the pine barrens, even when the heat was so staggering that sugar sand roads blurred just feet ahead, offering a feeling of walking through some gauzy cosmic portal.
Back then, I buddied up with a few full-blown Pineys. It… Continue