We came out in the pea soup fog (in the dark) and were not happy; luckily once the sun poked up in the East the fog burned off and we were sitting in miles of baitfish. We filled the live well with bait in no time and landed a bunch of huge bruiser Bluefish but no Bass. We made a smart decision to zig when… Another beauty of a bass jumps onto the leaderboard. Nice work Fred Strausbaugh. This could be a hot bassing week/weekend. Lookin’ for a 50. Tons of time left in the event. Get folks entered. I see that a real nice boat was ripped asunder in Barnegat Inlet. All I have is a photo facebooked my way; very few details. Here’s what I got from Jim Watson, via  Jersey Shore Hurricane News's: After encountering fog earlier this morning, a boat ran…

We hope that you will participate in the 6th annual fishing tournament to benefit the High Point Volunteer Fire Company of Harvey Cedars (Est. 1937).
This fire company takes pride in earning most of…
Continue

I’m glad to see all y’all made it down for the holiday weekend – and apparently all y’all’s friends, relatives and distant in-laws made it down to boot.

I know every year it’s one of those “most crowed ever” knee-jerk responses to this fist big summerish weekend.

To me, Memorial Day Weekend is like a practice weekend – loosening up for serious summer weekends beginning in late June, i.e. school-out. But, this year, I got some semi-nonanecdotal reports from the… 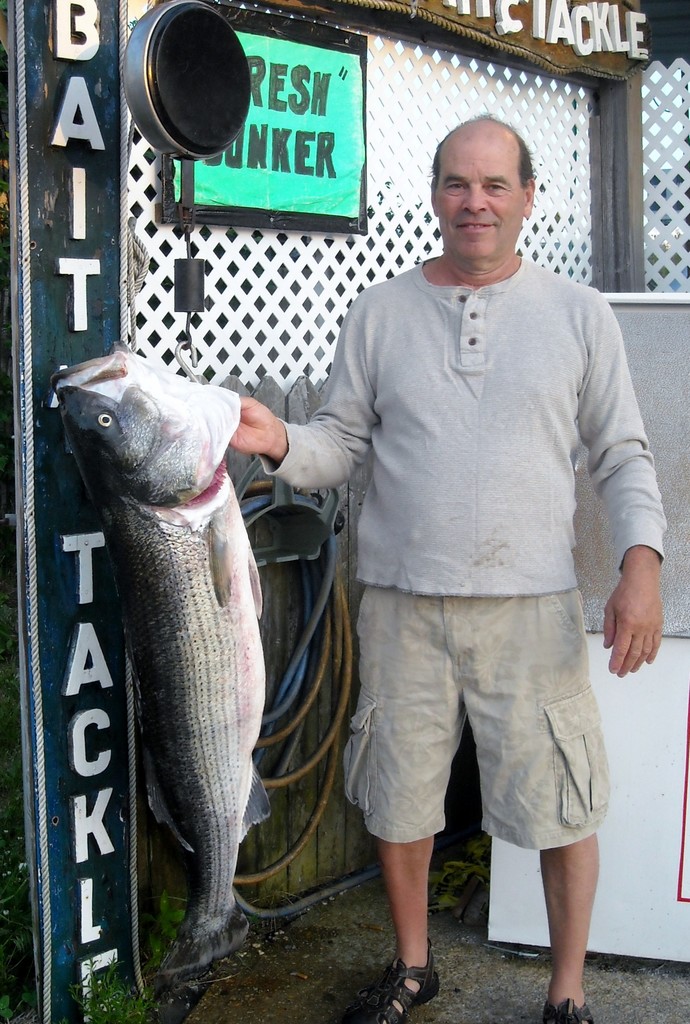 The oddity (for me) was the mega-bass went for clams. I’ve never been big on clams as a trophy-fish attractant but Mark stuck to his bait guns and…

Monday, May 28, 2012: I was wrong. I had so suspected it would light up on the striper front this weekend. I based that on the insane number of anglers out there, the damn-good water conditions and, more fundamentally, the fact we’re approaching the height of the spring run. Just can’t say it happened that way.

While I didn’t get any real skunk reports, thanks to fluke and bluefish, I heard what was close to some grumbles of…

Friday, May 25, 2012: Kinda pale ;looking out there but the relatively light onshore winds make for fairly decent fishing conditions. The surf is pushing a 2 to 3 foot easterly short-period swell and the water is clean and, once again, looking very fishful. However, I did some beach stops and the fishing pressure is surprisingly light, considering every breakfast joint on the Island is hoping, with waiting lines.

I have to think that boat anglers will find some serious…

Thursday, May 24, 2012: It seems fishy out there. You can smell it – helped along by light directly onshore winds. That said, where the hell are the frickin’ bass? Yes, there have been a scattering of beachfront bass taken, mainly shorts and a few just keepers, going for clams and bunker.

Yesterday, I had my first full-skunk plugging session in weeks. I had a workload on my mind and wasn’t overly immersed in my casting. I swear there’s some cosmic thing…

Some state saltwater records from local/nearby waters or ports

Wednesday, May 23, 2012: If you’re a saltwater angler on the mainland right now – noon – you’ll surely be champing at the bit. The skies have been burnt clean -- into a blue like we haven’t seen in awhile. What’s more, the sun beat down has already pushed mainland temps well past the predicted high. It’s into the 80s.

And if you’re contriving any way possible to get over here to fish the LBI area, you’re kinda on the right track. That said, I’m going to go off the…

I really should concentrate purely on fishing for this holiday weekend’s column.

(Disclaimer: The following is based on an actual occurrence, though I may have melted down the hard cold facts a wee bit.)

I saw this advertisement for a “Hoarders Seminar” and felt professionally compelled to attend. I figured it would be a load of really cool people, all mulling around eating bagels, sipping energy drinks and ravenously talking about all the cool…

Corrected May 22 Simply Bassin' Board

The big weekend will be hugely fished. Let’s get folks signed up for Simply Bassin’.

Sunday, May 20, 2012: Winds and waves are conspiring to squelch any hopes of slow and easy angling, be it boat or beach. While high rip current warnings are in effect, it’s closer to just crappy surf conditions.

With the way everything has been early-ized this spring, yesterday-formed Tropical Storm Alberto shouldn’t be overly surprising – and really not as much as indicator of things to come as many folks might think.

What I call the Southeast US Gulf, where Alberto…

Saturday, May 19, 2012: Damn, it was mighty decent out there today. I got in a load of backwoodsing time and the energy/wildlife level was through the high-sky ceiling. It’s days like today that remind me why I’m a spring person – and a summer and fall person during those seasons. Yes, that leaves one season of which I’m not “a person.”

Freaky comment: I stopped by Cumberland Farms for a cold one (Pepsi “Throwback”) and the talk in line focused on the gorgeous day, to which a lottery…

This is the time of year I throw my hook/line/sinker support to one of the most valuable training experiences any young angler/navigator can get.

The Beach Haven Charter Fishing Association’s “Junior Mates Program” is back and looking to train “juniors” for mating duties.

As I say each year this is an uncanny offer. Throughout the planet, mate training is literally a secret pass-down cache of knowledge, limited to friends and family of those who know the ropes – and…