Friday Aug. 19, 2011:
Holgate note: The Holgate front beach will open to mobile anglers and pedestrians on the afternoon of Thursday, September 1. There is a high tide in the a.m. of that day. I'm told the beach is pretty much the same as we left it in April: eroded and essentially connected with the bayside at a number of points. However, the subtleties of driving the front beach won't be known until we cross it a few times. As nearly as I know, the developed section of Beach Haven…

Shack update -- or not 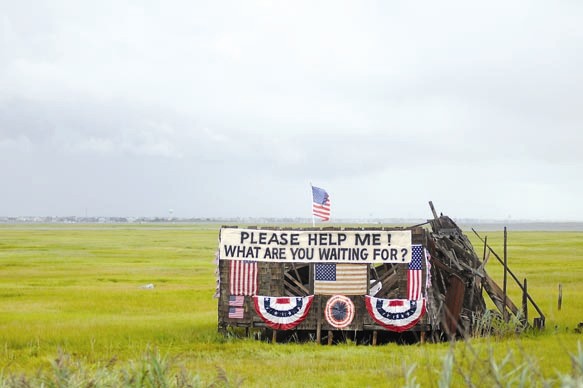 It’s pretty obvious you can no longer tell the Shack from shinola. The new drapery on the outside of the famed landmark is part of an ongoing effort to somehow breath life back into essentially an architectural corpse.

I’m getting a goodly load of calls and emails regarding the latest “sign,” and it’s humanesque…

A Fishing Session That Bombed;

Sharks Have Minds of Their Own

The coolest part of columnizing and blogging is when the readership checks in with me, proving there are actually folks reading this sh-tuff!

Over the past few weeks, I’ve been graced –semi-inundated – by emails from all over Tarnation. Even though my summer workload often goes gonzo, I always try to answer emails, either via…

After the rains moved out the heat and a stifling humidity moved in. The non-winds have quite a few boat anglers zipping out to fluke, though low- and non-drift conditions are entrenched -- and storms will grow to the west. Ocean water has gone brown, though very warm. I had small weakfish at night, bridges. Small jigheads worked best.

I got mainly fair to junk reports from weekenders. Loads of small fluke. Many folks are going with big baits but even…

The winds and weather are so iffy many anglers have taken the day off or are hanging close to port, mainly fluking bayside areas. I did chat over the radio with a fellow who has a doormat he thinks might push 8 pounds, hand scale estimate. He got it on a live eel. When said eel had given up the slime – and its ghost – he chunked it and nailed some other nice fluke. Not surprising. Fluke will eat orange peels covered in coffee ground if they happened…

There is some birdplay off north end beaches. It seems to be small bait being chased by small fish.

The main fish chat centers on sharks, which are being spotted – or caught -- everywhere watery. Bays, inlets, nearshore waters and further out waters have an unusually high showing of the men in gray suits. I’m sure that is primarily due to the stingray and… 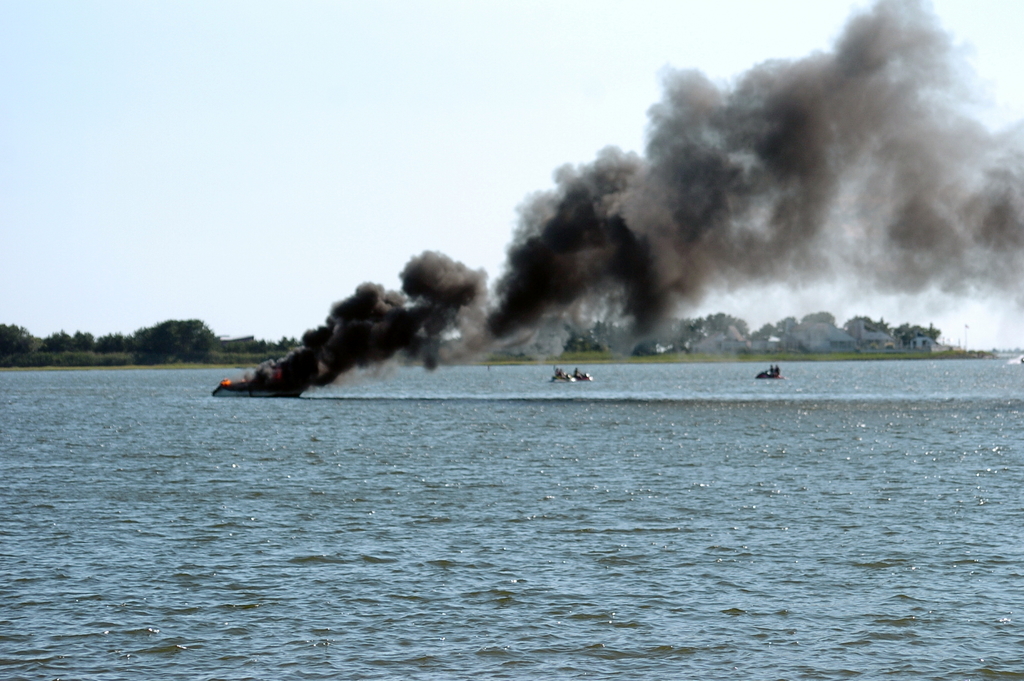 (Above) It was a bad boating day for this vessel in Loveladies Harbor.  I was heading down to do some plugging off the New South Jetty and saw the mushroom cloud that marked the start of this boat's, uh, ignition woes. I didn't get any details on what happened. I'm sure the incidentals will reach my news desk. Per most showy blazes, this one attracted folks…

Big Bass Could Be Big-Time;

I’ve got a goodly gob of fishing minutiae to bandy about this week. Hopefully, you folks who duck in here to read about odder out-there stuff will come along for the angling ride. (Above) Here’s a look at the very-cool 2011 LBI Surf Fishing Classic cap.

The west winds have surfers happy, since it has combined with a decent long-period tropical swell. However, it did make it a tad snotty out in the ocean.

I hung out at the Barnegat Lighthouse for a good chunk of the day, going to the top… 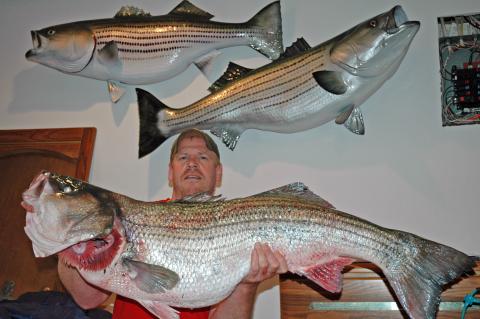 Yes, the striped bass world record – NJ’s prize for decades -- has likely been broken. I’m going to start there and sidestep the insane and indubitable onslaught of doubts and accusations already being blindly shot forth by chatroom numbnuts and half-ass easy chair… 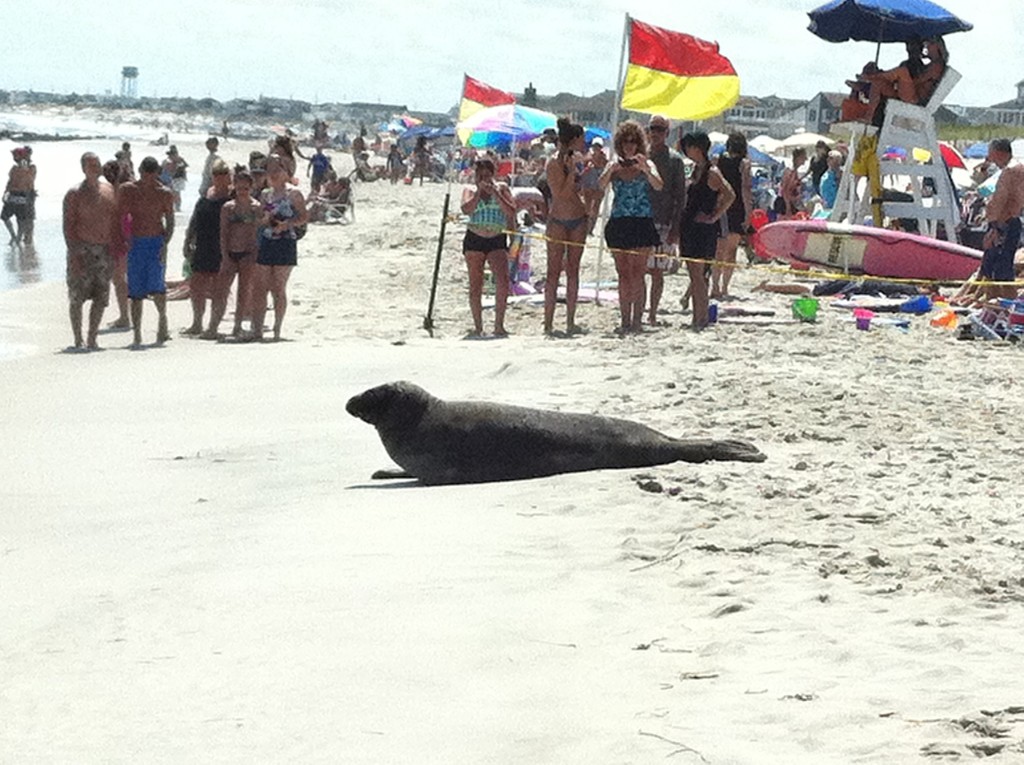 Sunday, August 07, 2011: Above is one of the better shots of our pet-like LBI seal. Thanks Scott Kegler. Thanks to the loads of folks keeping me posted on this perfect summer distraction. Such nature stuff makes my day when I’m stuck in the office -- or traffic.

Well, the weekend weather is looking a lot iffier by the minute. It’s far from a washout, or even seriously threatening, per se, just a lot of unstable air. The good side is the instability has greatly reduced the wind potential. Look for light and variable Not a bad trade-off.

I do want to note some significant ocean swells and waves today. A southerly groundswell has mixed with yesterday’s northerly windswell. The resulting 4- to 5-foot waves…

The first northerly winds in a while have blown up a bit of swell. But, a switch to the south will happen by tomorrow, followed by pretty brisk southerlies. The windage is going to make fluke fishing a tad trickier than it’s been. Unfortunately, it’s going to be a lot more than drift speed, especially by late-day. Take along some (much) heavier bank sinkers. Don’t be one of those improvisers (too often yours truly) who end up trying to jam two or…

SEALED WITH A BITE: That over-summering huge gray seal visiting our parts has made quite an LBI name for itself. The one name it won’t accept is Sam the Sea Lion.

A seal balks at the mere mention of being a sea lion. Not only does the closest sea lion live thousands of miles away but also no self-respecting seal would be caught dead with showy ear flaps, like those which distinguish a sea lion from a…

The coming days will be the tale of two fish and the regulatory process by which the pair is protected and managed.

The future of one fish, the striped bass, is directly tied to the future of the other, menhaden. But you wouldn't know it by the way the Atlantic States Marine Fisheries Commission is acting.