Tuesday, March 29, 2022: This blog had momentarily fallen out of favor with me due to a prohibitive workload ... 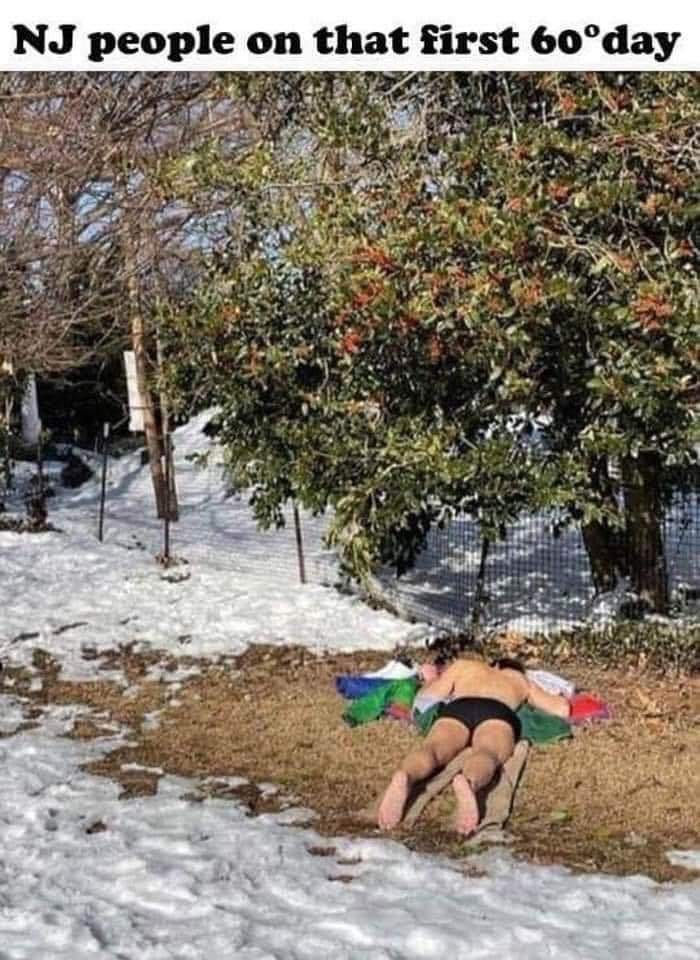 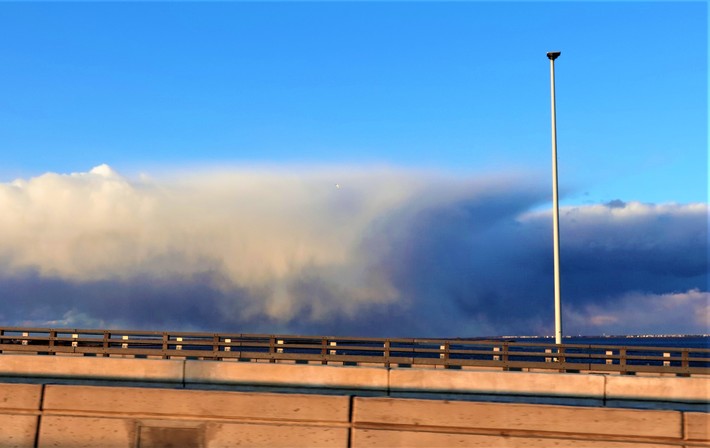 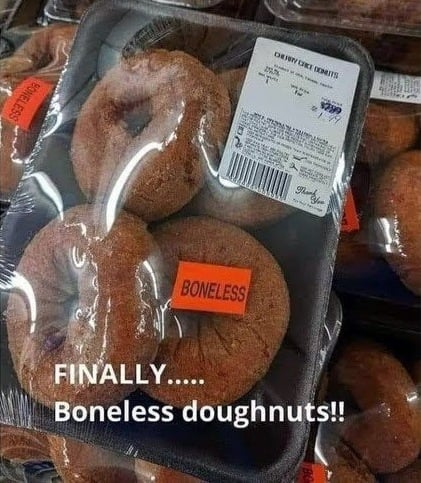 Tuesday, March 29, 2022: This blog had momentarily fallen out of favor with me due to a prohibitive workload of writing demands. However, it shall persevere as I reacquaint myself with life’s proper priorities, like keeping this blog going for its 25th year.

As to my back-off in here, I’ve been dedicating my extra wordage – not bound for The SandPaper -- to articles destined for treasure magazines. For fodder, I’ve been swinging the detector loop all winter, at least during any free minutes. In a month or so, I’ll be going back into the water to hunt. Here’s what I looked like in the way-back days, as I explored local lakes and creeks where swimming took place as much as 200 years ago. 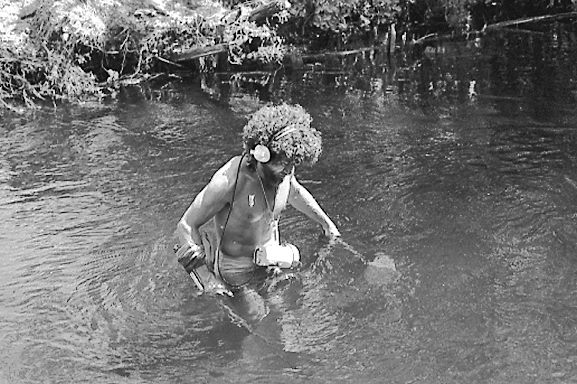 Along the treasure-of-sorts lines, I’m upping my scrap collecting game, to the point of some entry-level dumpster diving. Entry-level. That’s kind of a pun, eh? I’m mainly seeking copper wire to benefit charities – once sold to scrap yards. With copper prices flirting with all-time way-highs, it is well worth accumulating. In fact, a pound of pennies melted down is worth twice the face value. But don’t even think about. It’s federally illegal to profit from such a meltdown, though it can used for industrial purposes. Along with that, just try to find pounds and pounds of all copper pennies nowadays, after banks have been removing them from circulation for decades. 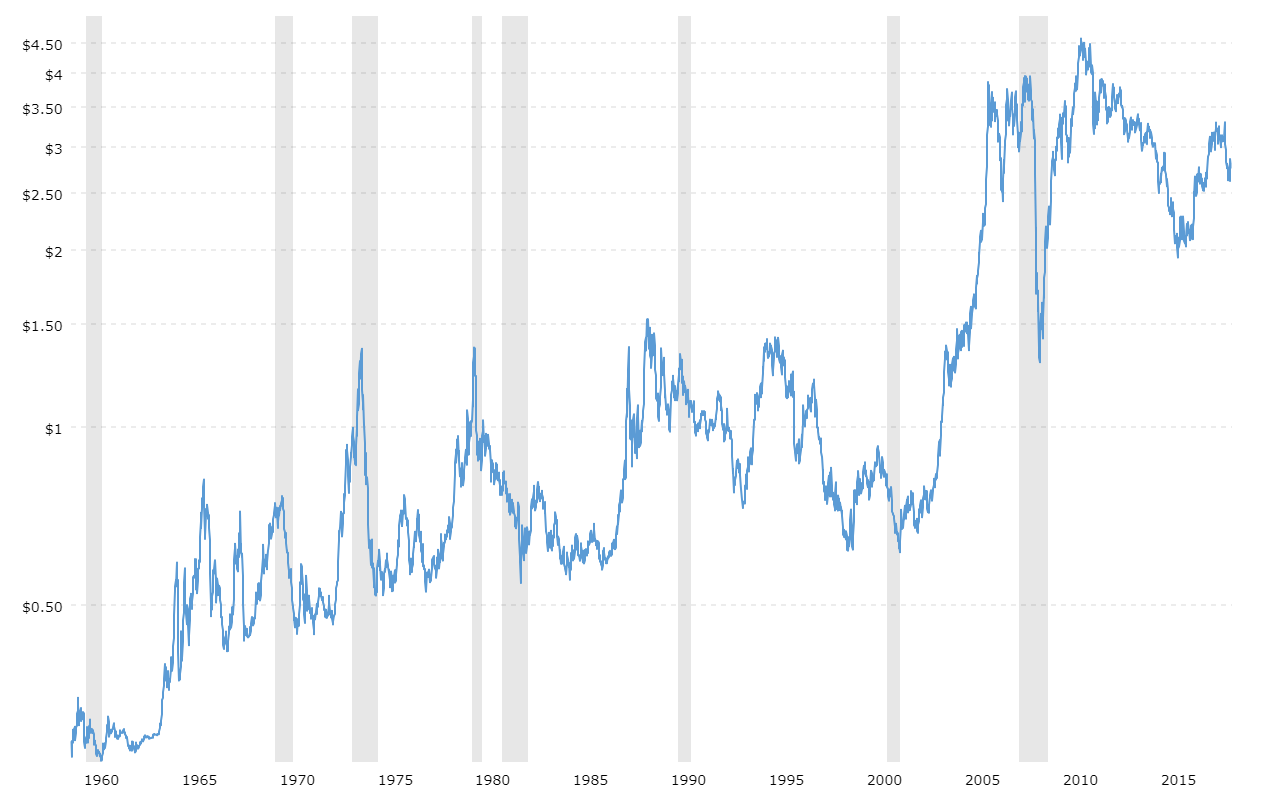 LBI-ISH: On the topic of LBI, I can only state the obvious and project it into the future. The road scars from the Causeway Project’s Ship Bottom sector have reached an all-time level of awful, dating back to the opening days of the Causeway.

As to the incoming (9th Street) far right lane, the NJDOT might as well call it a joyride and sell tickets. The bumps almost qualify as dirt biking whoop de whoops. I can't see it getting repaved before summer but we'll see -- and hold on for dear life.

Outgoing (8th Street) lanes are beyond jarring. For anyone with shabby shock absorbers, you might need a chiropractor after regularly driving it. Even speedsters have realized there's no taking the outgoing stretch of roadway at speed, i.e. 40 mph.

The DOT has not been overly forthcoming when asked when things will get better – and smoother -- thereabouts. Simply put, the stated timeframe for any big final fix-up is “No time soon.” In fact, there are a slew of new digs that still need done in preparation for the big switch to new proposed traffic patterns, which will render both the Boulevard and Central Avenue (Ship Bottom) as two-way streets, north and south. That two-wayness has never been  seen there since that area pretty much began as a counterclockwise "circle," which only allowd for one-way traffic.

Here's a look at the future traffic signals being put into place at 9th and the Boulevard. It further indicates this traffic pattern change is really going to happen. 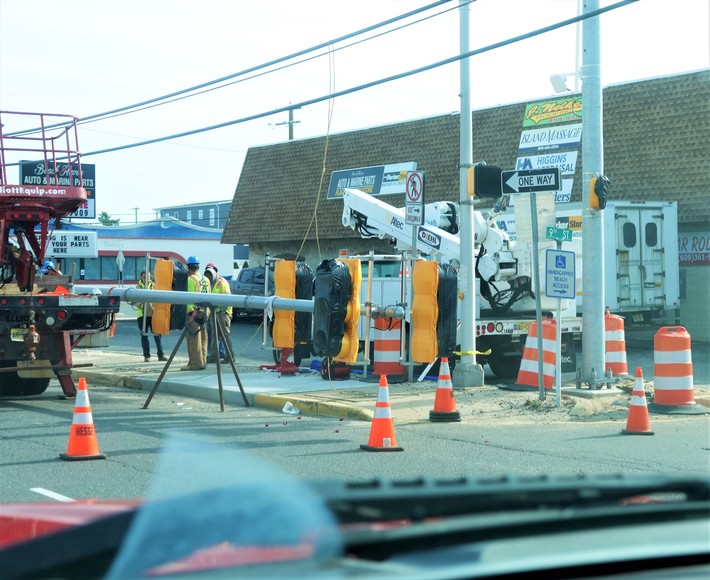 Just as crazed for area motorists is the work now going into high gear at Marsha Drive in Manahawkin. Entire lane closures on Route 72 and even the detouring of all Route 72 eastbound traffic into Beach Haven West remain in the game plans as work progresses.

An appeal: Do not do what way too many drivers have been doing: hitting the work area – alive with barrels and lights – at 55 mph or faster. It will not end well. At the height of night work, safe-passage speeds must often be lowered to 25 mph. Hey, I’m just trying to look out for everyone’s safety – and help out workers who have told me about too-fast-for-conditions "maniac" motorists.

A Causeway image for you leadfooted driver to keep in mind on local Route 72. ONE MORE SUMMER …: For mariners, it has been confirmed that a Coast Guard vessel and crew will once again summer in Beach Haven -- at least on weekends. The vessel will be moored at the Mordecai Boat Basin. From that location, the Coast Guard will be able to more quickly respond to emergencies on the south end, though it can also be hit out for any larger Island-wide crisis.

Upper brass in USCG Headquarters in DC had hoped to permanently pull the plug on this “small” station. Mariner outcry, backed by local politicos, has put that decision on hold, though there are still no long-term plans to maintain the station after this summer.

Obviously, protests over the abandonment of a south end CG presence will continue, highlighted by examples of how that small station has been a lifesaver in the recent past.

HOLGATE DOWN TIME: Holgate’s far end is closed as of Thursday. It is the Forsythe Refuge bird closure, dating back to whenever.

The bird closure was explosive when first enacted. It led to me unfairly getting a load of local grief when I was assigned by then managing editor Jack Germain to journalistically write about why the closure was taking place. By merely writing straight up about the subject got me labeled by some misreaders as a closure sympathizer, which was fully off the mark.

It took me years to shake that label. It wasn’t until I fought like the dickens to make sure the south end was left open to buggies after bird closures that got me in the better graces of most Holgate fishing aficionados.

Those years of truly nasty interplay between myself and former refuge administrators – once almost coming to on-beach blows twixt me and a former-Marine refuge manager -- eventually cleared the way for managed buggy access to the beachline once bird season was over.

In recent years, though, beach buggy usage on the once disputed sand has fallen off the table. That is surely the result of an inexplicable downturn in fish, a mystery inside an enigma. At the same time, the pedestrian presence has been quite steady and showy, which is wonderful. Ironically, that beachcomber aspect is what the refuge was trying to protect when threatening to prevent beach buggy access. In that vein, all is right in the world. As to when the fish will ever return … 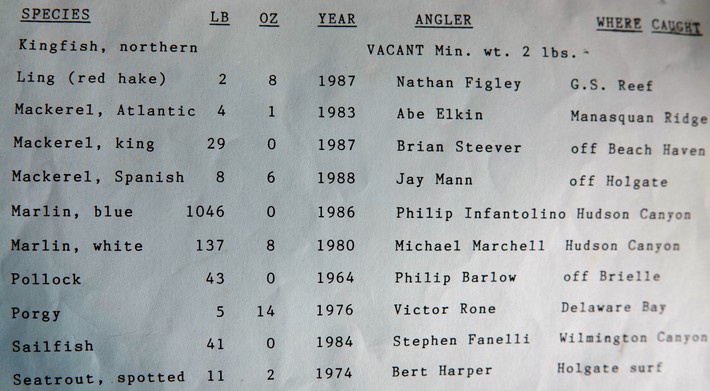 I was bummed when the state placed my catch as "off Holgate," making it sound like a boat fish when I took it from the surf not far from where the late very great Bert Harper -- below me on this list -- took his state record spotted seatrout. He got his listed as "Holgate surf." Both fish were taken not far from where I got my 50-pound striper (below) during the LBI Surf Fishing Tournament. Imagine if that fish was filled out!

I bring up all those hookups to further highlight what I'm bemoaning about the utter decline in Holgate beachfront and Rip fishing. State sur fishing records were once made to be broken in Holgate. How did it all disappear?! 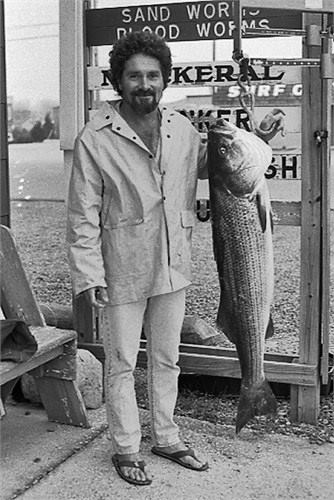 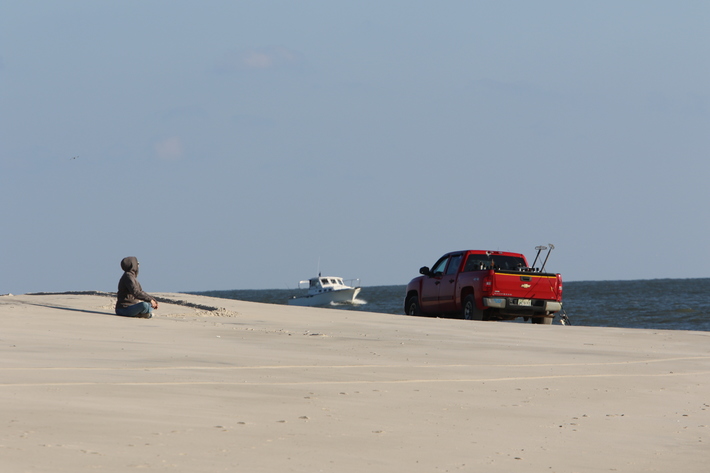 RUNDOWN: Striped bass continue to make a serious showing, both bay and (slightly less so) beachfront. Bayside and The Point, there have been just-keepers left and right, as if the conservation of undersized fish is now paying off with more slightly larger models – the coming of age for former “shorts.”

There is also jigging bass to be had, bridge-wise. White plastics help, as does plasticized flavoring of a GULP ilk.

The month-long rush for the tautog begins April 1st.  The four-fish bag looms larger than ever with many jumbos available on most wrecks and reefs.

In case there’s any question about what species is the bulldog among gamefish, the estimated release mortality rate for blackfish is a bad-arse 1.67%. By comparison, the discard mortality rate is just under 10 % for stripers, roughly 7.5 % for fluke, 15% for bluefish, and a catastrophic 50% for black seabass caught in deeper water.

The multi-shop Spring (Striped Bass) Derby begins April 2nd. Look for a copy of The SandPaper’s “Waterfront” special edition for more details at www.thesandpaper.net/pageview/viewer/Waterfront, or, go to thesandpaper.net and at the top of the homepage, click on “Publications.” Scroll down to “Waterfront.” Also, check out the localized “Leader” editions for Tuckerton/LEHT, Stafford Township, and Barnegat Township.

STAFFORDITES: Who recalls when it was mandatory to have a moustache to be a Manahawkin, NJ, firefighter – unless you couldn’t quite grow one. 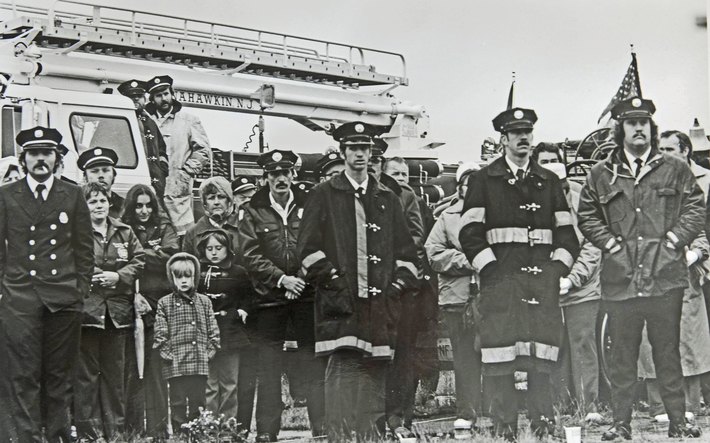